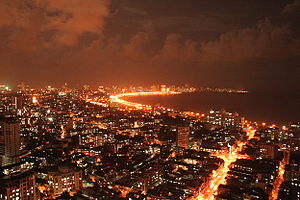 Mumbai (previously known as Bombay until 1996) is a natural harbour on the west coast of India, and is the capital city of Maharashtra state.

Mumbai is India's largest city, and one of the world's most populous cities. It is the financial capital of India and a global city. Many billionaires live there. The city is the second most-populous in the world. It has about 13 million people.[1] Along with the neighbouring cities of Navi Mumbai and Thane, it forms the world's 4th largest urban agglomeration. They have around 19.1 million people[2]

The seven islands that form Bombay were home to fishing colonies. The islands were ruled by successive kingdoms and indigenous empires before Portuguese settlers took it. Then, it went to the British East India Company. During the mid-18th century, Bombay became a major trading town. It became a strong place for the Indian independence movement during the early 20th century. When India became independent in 1947, the city was put into Bombay State. In 1960, following the Samyukta Maharashtra movement, a new state of Maharashtra was created with Bombay as the capital. It was renamed Mumbai in 1996.[3]

Mumbai generates more than 6% of India's GDP.[4] It accounts for 25% of industrial output, 40% of sea trade, and 70% of capital transactions to India's economy.[5] The Reserve Bank of India, the Bombay Stock Exchange, the National Stock Exchange of India and many Indian companies and multinational corporations are in the city. It also has the Hindi film and television industry, known as Bollywood.