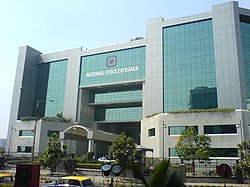 The National Stock Exchange of India Limited (NSE), is a Mumbai-based stock exchange. It is the biggest stock exchange in India and the third biggest in the world in terms of amounts of transactions.[1] NSE is mutually-owned by a set of leading financial institutions, banks, insurance companies and other financial intermediaries in India but its ownership and management operate as separate groups.[2] As of 2006, the NSE VSAT terminals, 2799 in total, cover more than 1500 cities across India.[3] In July 2007, the NSE had a total market capitalization of 42,74,509 crore INR making it the second-largest stock market in South Asia in terms of market-capitalization.[4] 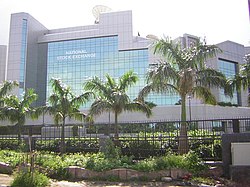 The National Stock Exchange of India was promoted by leading Financial institutions at the behest of the Government of India, and was incorporated in November 1992 as a tax-paying company. In April 1993, it was recognized as a stock exchange under the Securities Contracts (Regulation) Act, 1956. National Stock Exchange of India commenced operations in the Wholesale Debt Market (WDM) segment in June 1994. The Capital Market (Equities) segment of the NSE commenced operations in November 1994, while operations in the Derivatives segment commenced in June 2000.

The NSE has remained in the lead of modernization of India's capital and financial markets, and its pioneering efforts include:

NSE also conducts online examination and awards certifications, under its programmes of NSE's Certification in Financial Markets (NCFM)[2]. Currently, certifications are available in 9 modules, covering different sectors of financial and capital markets. The branches of the NSE are located throughout India.