Odia is the sixth Indian language to be designated a Classical language, on the basis of having a long literary history and not having borrowed extensively from other languages.[18][19][20][21] The earliest known inscription in Odia dates back to the 10th century CE.[22]

Odia is an Eastern Indo-Aryan language belonging to the Indo-Aryan language family. It is thought to be directly descended from an Odra Prakrit, which was spoken in east India over 1,500 years ago, and is the primary language used in early Jain and Buddhist texts.[23] Odia appears to have had relatively little influence from Persian and Arabic, compared to other major Indo-Aryan languages.[24]

The proto-languages of eastern Magadhan; the split and descent of Proto-Odra (Odra Prakrit), the ancestor of the modern Odia language, from Proto-Magadhan (Magadhi Prakrit)[25] 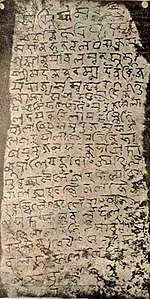 The history of the Odia language is divided into eras:

The beginning of Odia poet coincides with the development of Charya sahitya, the literature started by Vajrayana Buddhist poets such as in the Charyapada. This literature was written in a specific metaphor called twilight language and prominent poets included Luipa, Tilopa and Kanha. Quite importantly, the ragas that are mentioned for singing the Charyapadas are found abundantly in later Odia literature.

Jayadeva was a Sanskrit poet. He was born in an Utkala Brahmin family of Puri in circa 1200 CE. He is most known for his composition, the epic poem Gita Govinda, which depicts the divine love of the Hindu deity Krishna and his consort, Radha, and is considered an important text in the Bhakti movement of Hinduism. About the end of the 13th century and the beginning of the 14th, the influence of Jayadeva's literary contribution changed the pattern of versification in Odia.[citation needed]

Odia is mainly spoken in the state of Odisha, but there are significant Odia-speaking populations in the neighbouring states, such as Andhra Pradesh, Madhya Pradesh, Jharkhand, West Bengal and Chhattisgarh.[32]

Due to the increasing migration of labour, the west Indian state of Gujarat also has a significant population of Odia speakers.[33] Significant numbers of Odia speakers can also be found in the cities of Vishakhapatnam, Hyderabad, Pondicherry, Bangalore, Chennai, Goa, Mumbai, Raipur, Jamshedpur, Baroda, Ahmedabad, New Delhi, Guwahati, Shillong, Pune, Gurgaon, Jammu and Silvassa[34] According to 2011 census, 3.1% of Indians in India are Odia speakers,[35] of which 93% belong to Odisha.

The Odia diaspora constitute a sizeable number in several countries around the world, totalling the number of Odia speakers on a global scale to 50 million.[36][37][page needed][need quotation to verify] It has a significant presence in eastern countries such as Thailand, Indonesia, mainly carried by the sadhaba, ancient traders from Odisha who carried the language along with the culture during the old-day trading,[38] and in western countries such as the United States, Canada, Australia and England. The language has also spread to Burma, Malaysia, Fiji, Mauritius, Sri Lanka and Middle East countries.[37] It is spoken as a native tongue by the Bonaz community in northeastern Bangladesh.

Length is not contrastive. All vowels except /o/ have nasal counterparts, but these are not always contrastive. Final vowels are pronounced in the standard language, e.g. Odia [pʰulɔ] contra Bengali [pʰul] "flower".[53]

Odia retains the voiced retroflex lateral approximant [ɭ],[55] among the Eastern Indo-Aryan languages. The velar nasal [ŋ] is given phonemic status in some analyses, as it occurs also as a Final velar nasal [ŋ]. E.g.- ଏବଂ- ebaṅ (ebɔŋ)[56] Nasals assimilate for place in nasal–stop clusters. /ɖ ɖʱ/ have the flap allophones [ɽ ɽʱ] in intervocalic position and in final position (but not at morpheme boundaries). Stops are sometimes deaspirated between /s/ and a vowel or an open syllable /s/+vowel and a vowel. Some speakers distinguish between single and geminate consonants.[57]

Odia retains most of the cases of Sanskrit, though the nominative and vocative have merged (both without a separate marker), as have the accusative and dative. There are three genders (masculine, feminine and neuter) and two grammatical numbers (singular and plural). However there are no grammatical gender. The usage of gender is semantic, i.e. to differentiate male member of a class from female member.[58] There are three true tenses (present, past and future), others being formed with auxiliaries. 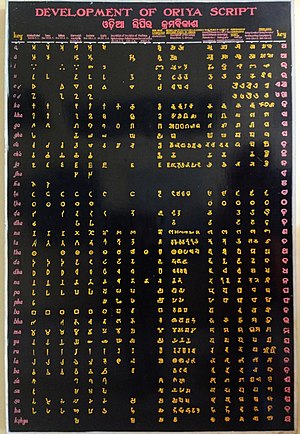 A detailed chart depicting evolution of the Odia script as displayed in a museum at Ratnagiri, Odisha

The Odia language uses Odia script (also known as the Kalinga script). It is a Brahmic script used to write primarily Odia language and others like Sanskrit and several minor regional languages. The script has developed over nearly 1000 years with the earliest trace of the script being dated to 1051 AD. It is a syllabic alphabet or an abugida, wherein all consonants have an inherent vowel embedded within.

Odia is a syllabic alphabet or an abugida wherein all consonants have an inherent vowel embedded within. Diacritics (which can appear above, below, before, or after the consonant they belong to) are used to change the form of the inherent vowel. When vowels appear at the beginning of a syllable, they are written as independent letters. Also, when certain consonants occur together, special conjunct symbols are used to combine the essential parts of each consonant symbol.

The curved appearance of the Odia script is a result of the practice of writing on palm leaves, which have a tendency to tear if you use too many straight lines.[59]

The earliest literature in Odia language can be traced to the Charyapadas composed in the 7th to 9th centuries.[60] Before Sarala Das, the most important works in Odia literature are the Shishu Veda, Saptanga, Amara Kosha, Rudrasudhanidhi, Kesaba Koili, Kalasha Chautisha etc.[27][28][29] In the 14th century, the poet Sarala Das wrote the Sarala Mahabharata, Chandi Purana, and Vilanka Ramayana, in praise of the goddess Durga. Rama-Bibaha, written by Arjuna Dasa, was the first long poem written in the Odia language.

The following era is termed the Panchasakha Age and stretches until the year 1700. The period begins with the writings of Shri Chaitanya Mahaprabhu whose Vaishnava influence brought in a new evolution in Odia literature. Notable religious works of the Panchasakha Age include those of Balarama Dasa, Jagannatha Dasa, Yasovanta, Ananta and Acyutananda. The authors of this period mainly translated, adapted, or imitated Sanskrit literature. Other prominent works of the period include the Usabhilasa of Sisu Sankara Dasa, the Rahasya-manjari of Debadurlabha Dasa and the Rukmini-bibha of Kartikka Dasa. A new form of novels in verse evolved during the beginning of the 17th century when Ramachandra Pattanayaka wrote Haravali. Other poets like Madhusudana, Bhima Bhoi, Dhivara, Sadasiva and Sisu Isvara-dasa composed another form called kavyas (long poems) based on themes from Puranas, with an emphasis on plain, simple language.

However, during the Bhanja Age (also known as the Age of Riti Yuga) beginning with turn of the 18th century, verbally tricky Odia became the order of the day. Verbal jugglery, eroticism characterise the period between 1700 and 1850, particularly in the works of the era's eponymous poet Upendra Bhanja (1670–1720). Bhanja's work inspired many imitators of which the most notable is Arakshita Das. Family chronicles in prose relating religious festivals and rituals are also characteristic of the period.

The first Odia printing typeset was cast in 1836 by Christian missionaries. Although the handwritten Odia script of the time closely resembled the Bengali and Assamese scripts, the one adopted for the printed typesets was significantly different, leaning more towards the Tamil script and Telugu script. Amos Sutton produced an Oriya Bible (1840), Oriya Dictionary (1841–43) and[61] An Introductory Grammar of Oriya (1844).[62]

Odia has a rich literary heritage dating back to the thirteenth century. Sarala Dasa who lived in the fourteenth century is known as the Vyasa of Odisha. He translated the Mahabharata into Odia. In fact, the language was initially standardised through a process of translating classical Sanskrit texts such as the Mahabharata, Ramayana and Srimad Bhagabata Gita. The translation of the Srimad Bhagabata Gita by Jagannatha Dasa was particularly influential on the written form of the language. Odia has had a strong tradition of poetry, especially devotional poetry.

Classical Odia literature is inextricably tied to music, and most of it was written for singing, set to traditional Odissi ragas and talas. These compositions form the core of the system of Odissi music, the classical music of the state.

Prose in the language has had a late development.

Three great poets and prose writers, Kabibar Radhanath Ray (1849–1908), Fakir Mohan Senapati (1843–1918) and Madhusudan Rao (1853–1912) made Odia their own. They brought in a modern outlook and spirit into Odia literature. Around the same time the modern drama took birth in the works of Rama Sankara Ray beginning with Kanci-Kaveri (1880).

Among the contemporaries of Fakir Mohan, four novelists deserve special mention: Aparna Panda, Mrutyunjay Rath, Ram Chandra Acharya and Brajabandhu Mishra. Aparna Panda's Kalavati and Brajabandhu Mishra's Basanta Malati were both published in 1902, the year in which Chha Mana Atha Guntha came out in the book form. Brajabandhu Mishra's Basanta Malati, which came out from Bamanda, depicts the conflict between a poor but highly educated young man and a wealthy and highly egoistic young woman whose conjugal life is seriously affected by ego clashes. Through a story of union, separation and reunion, the novelist delineates the psychological state of a young woman in separation from her husband and examines the significance of marriage as a social institution in traditional Indian society. Ram Chandra Acharya wrote about seven novels during 1924–1936. All his novels are historical romances based on the historical events in Rajasthan, Maharashtra and Odisha. Mrutyunjay Rath's novel, Adbhuta Parinama, published in 1915, centres round a young Hindu who gets converted to Christianity to marry a Christian girl.

One of the great writers in the 19th century was Pandit Krushna Chandra Kar (1907–1995) from Cuttack, who wrote many books for children like Pari Raija, Kuhuka Raija, Panchatantra, Adi Jugara Galpa Mala, etc. He was last felicitated by the Sahitya Academy in the year 1971–72 for his contributions to Odia literature, development of children's fiction, and biographies.

One of the prominent writers of the 19th and 20th centuries was Muralidhar Mallick (1927–2002). His contribution to Historical novels is beyond words. He was last felicitated by the Sahitya Academy in the year 1998 for his contributions to Odia literature. His son Khagendranath Mallick (born 1951) is also a writer. His contribution towards poetry, criticism, essays, story and novels is commendable. He was the former President of Utkal Kala Parishad and also former President of Odisha Geeti Kabi Samaj. Presently he is a member of the Executive Committee of Utkal Sahitya Samaj. Another illustrious writer of the 20th century was Mr. Chintamani Das. A noted academician, he was written more than 40 books including fiction, short stories, biographies and storybooks for children. Born in 1903 in Sriramachandrapur village under Satyabadi block, Chintamani Das is the only writer who has written biographies on all the five 'Pancha Sakhas' of Satyabadi namely Pandit Gopabandhu Das, Acharya Harihara, Nilakantha Das, Krupasindhu Mishra and Pandit Godabarisha. Having served as the Head of the Odia department of Khallikote College, Berhampur, Chintamani Das was felicitated with the Sahitya Akademi Samman in 1970 for his outstanding contribution to Odia literature in general and Satyabadi Yuga literature in particular. Some of his well-known literary creations are 'Bhala Manisha Hua', 'Manishi Nilakantha', 'Kabi Godabarisha', 'Byasakabi Fakiramohan', 'Usha', 'Barabati'.

Anita Desai's novella, Translator Translated, from her collection The Art of Disappearance, features a translator of a fictive Odia short story writer; the novella contains a discussion of the perils of translating works composed in regional Indian languages into English.

The following is a sample text in Odia of Article 1 of the Universal Declaration of Human Rights (ମାନବିକ ଅଧିକାରର ସାର୍ବଜନୀନ ଘୋଷଣା):

Odia in the Odia script

Odia in the IPA

Article 1: All human beings from birth are free and dignity and rights are equal. Their reason and intelligence endowed with and they towards one another in a brotherhood spirit behaviour to do should.

Article 1: All human beings are born free and equal in dignity and rights. They are endowed with reason and conscience and should act towards one another in a spirit of brotherhood.