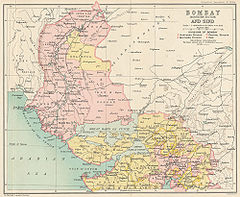 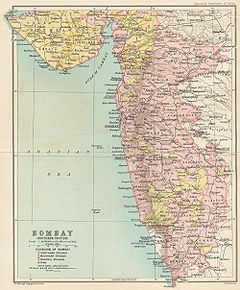 On 1 November 1956, Bombay State was re-organized under the States Reorganisation Act on linguistic lines, absorbing various territories including the Saurashtra and Kutch States, which ceased to exist. On 1 May 1960, Bombay State was dissolved and split on linguistic lines into the two states of Gujarat, with Gujarati speaking population and Maharashtra, with Marathi speaking population.[1]

As a result of the States Reorganisation Act on 1 November 1956, the Kannada-speaking districts of Belgaum (except Chandgad taluka), Bijapur, Dharwar, and North Canara were transferred from Bombay State to Mysore State.[5] but the State of Bombay was significantly enlarged, expanding eastward to incorporate the Marathi-speaking Marathwada region of Hyderabad State, the Marathi-speaking Vidarbha region of southern Madhya Pradesh, and Gujarati-speaking Saurashtra and Kutch states. The Bombay state was being referred to by the local inhabitants as "Maha Dwibhashi Rajya", meaning, "the great bilingual state".[3]

In 1956, the States Reorganisation Committee, against the will of Jawaharlal Nehru, recommended a bilingual state for Maharashtra-Gujarat with Bombay as its capital, whereas in Lok Sabha discussions in 1955, the Congress party demanded that the city be constituted as an autonomous city-state.[6] In the 1957 elections, the Samyukta Maharashtra movement opposed these proposals, and insisted that Bombay be declared the capital of Maharashtra.[7]

Bombay State was finally dissolved with the formation of Maharashtra and Gujarat states on 1 May 1960.[8]

Following protests of Samyukta Maharashtra Movement, in which 107 people were killed by police, Bombay State was reorganised on linguistic lines.[9] Gujarati-speaking areas of Bombay State were partitioned into the state of Gujarat following Mahagujarat Movement.[10] Maharashtra State with Bombay as its capital was formed with the merger of Marathi-speaking areas of Bombay State, eight districts from Central Provinces and Berar, five districts from Hyderabad State, and numerous princely states enclosed between them.[11]

Bombay State had three Chief Ministers after the independence of India:

In 1960, the designation of the "Governor of Bombay" was transmuted as the Governor of Maharashtra.[12]