Nashik (/ˈnʌʃɪk/, Marathi: [naːʃik] , also called as Nasik Template:Pronunciation)[10] is an ancient city and the largest city in the northern region of the Indian state of Maharashtra. Situated on the banks of river Godavari, Nashik is the fourth largest city in Maharashtra, after Mumbai, Pune and Nagpur. Nashik is well known for being one of the Hindu pilgrimage sites of the Kumbh Mela, which is held every 12 years.[11][12] Nashik is located about 190 km north of state capital Mumbai. The city is called the "Wine Capital of India" as more than half of India's vineyards and wineries are located here. Around 90% of all wine produced in India comes from the Nashik Valley.[1][13]

As per Ramayana, Nashik is the location on the banks of Godavari river where Laxman, by the wish of Lord Rama, cut the nose of demoness Shurpanakha and thus this city was named as "Nashik".[12]

Nashik lies in the northern part of Maharashtra state at 584 m (1,916 ft)[14] from the mean sea level which gives it ideal temperature variation, particularly in winters.[1]

The river Godavari originates from the Brahmagiri Mountain, Trimbakeshwar about 24 km (15 mi) from Nashik and flows through the old residential settlement, now in the central part of the city. Due to high pollution created by factories in proximity of the city the river was dying at an alarming rate. It has since been successfully cleaned.[15]

Nashik lies on the western edge of the Deccan Plateau which is an ancient volcanic formation.[16]

The city's tropical location and high altitude combine to give it a relatively mild version of a hot semi-arid climate (Köppen BSh). Temperatures rise slightly in October, but this is followed by the cool season from November to February. The cool season sees warm temperatures of around 28 °C or 82.4 °F during the day, but cool nights, with lows averaging 10 °C or 50 °F, and extremely dry air.

The Municipal Commissioner of Nashik is Kailas Jadhav.[22]

The ward committee consists of councillors representing the electoral wards within the territorial area of the ward committee.[23] There are 6 ward committee's namely Nashik (E), Nashik (W), Nashik Road, Panchavati, CIDCO and Satpur.[23] The main function of the committees is to approve the cost of works for the wards, incorporate the expenses in the budget etc.

The Nashik Municipal Corporation (NMC) is planning to start major civic projects in 2020. Projects like the creation of more smart roads, setting up of 800 CCTVs, installation of LED streetlights, Goda beautification project, construction of two major water treatment projects (WTPs), upgradation of STPs, making smart parking operational, etc. would be given priority by the municipal corporation.[24]

In the Nashik Municipal Corporation area about 225 MT of solid waste is generated per day. Unlike other Indian cities, this garbage is collected by vehicles titled 'Ghantagadi' (meaning the vehicle with a bell): a system which has resulted in smaller versions of the ghantagadi ply in the congested old city areas. A plant has been set by the Nashik Municipal Corporation near Pandav Leni (Pandavleni Caves) to process the garbage and convert into compost.[25]

Ram Kund in Nashik; the city is an important Hindu pilgrimage destination 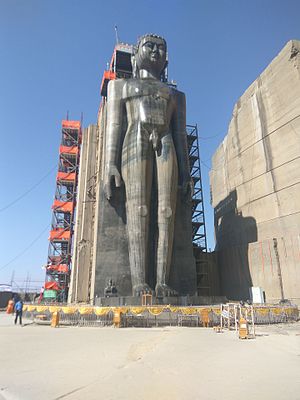 In February 2016, The Statue of Ahimsa, a 108 ft idol of first Jain tirthankara Rishabhdev carved in monolithic stone was consecrated at Mangi Tungi. It is recorded in the Guinness Book of World Records as the tallest Jain idol in the world.[31] 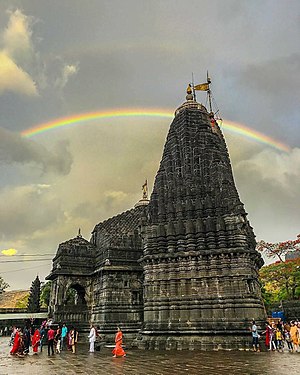 Trimbakeshwar Temple near Nashik (source of the Godavari River) 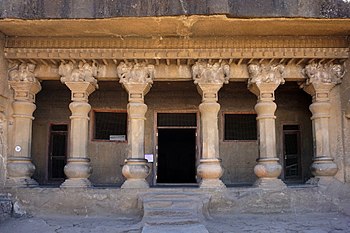 The Trirashmi (Pandavleni) Caves, or Nashik Caves, are a group of 24 caves carved between the 1st century BCE and the 2nd century CE,[32] representing the Hinayana Buddhist caves.

The Kumbh Mela is celebrated every six years at Haridwar and Allahabad and Maha Kumbh takes place every twelve years at four places in Allahabad, Haridwar, Ujjain, and Nashik. According to the Puranas, it is believed that Kumbh derives its name from an immortal pot of nectar, which the devatas (Gods) and demons fought over. The four places where the nectar fell are at the banks of river Godavari in Nashik, river Kshipra in Ujjain, river Ganges in Haridwar and at Triveni Sangam of Ganga, Yamuna and invisible Saraswati River in Allahabad.[11][34]

A grape vineyard in Nashik.

In early 1925, the table grape revolution was started in Ojhar, a small town near Nashik, by Raosaheb Jairam Krishna Gaikwad. Today, table grapes are exported to Europe, the Middle East, and Asia.[35]

The Igatpuri-Nashik-Sinnar investment region is an important node in the US$90 billion Delhi Mumbai Industrial Corridor Project.[37][38]

Nashik is a defense and aerospace manufacturing hub with Hindustan Aeronautics Limited aircraft manufacturing plant located at Ozar.[39] The Currency Note Press[40] and India Security Press are on Nashik Road, where Indian currency and government stamp papers are printed respectively.[41]

Apart from manufacturing, Nashik is an emerging investment destination for Information Technology companies. Tata Consultancy Services has invested in Nashik under the government of India BPO promotion scheme (IBPS). Also WNS, Accenture, TCS[44] has set up Digital Impact Square, or DISQ, which is a social innovation center.[45]

Nashik has a textile industry.[14] National Bank for Agriculture and Rural Development has selected Yeola Block for development of Paithani Cluster.[14] To facilitate exports, a container freight station was started at MIDC Ambad by the Central Government.[46]

Nashik has been described as "The Wine Capital of India" the Nashik region reportedly produced 10,000 tonnes of grapes per year.[47]

In 2013, there were 22 wineries in Nashik, out of 46 wineries throughout India.[48] The largest vineyard in Nashik is the Sula Vineyards.[1]

In the harvest season, Nashik is home to several wine festivals, such as the India Grape Harvest and SulaFest.[49][50]