Hindustan Times is an Indian English-language daily newspaper[2] introduced and founded in 1924 by Sunder Singh Lyallpuri, founder-father of the Akali movement and the Shiromani Akali Dal in Punjab Province. It played integral roles in the Indian independence movement as a nationalist and was then, a pro-Congress daily.[3][4][5] The newspaper is owned by Shobhana Bhartia.[6] It is the flagship publication of HT Media, an entity controlled by the KK Birla family.[7][8]

Hindustan Times is one of the largest newspapers in India, by circulation. According to the Audit Bureau of Circulations, it has a circulation of 993,645 copies as of November 2017.[1] The Indian Readership Survey 2014 revealed that HT is the second most widely read English newspaper in India after The Times of India.[9] It is popular in North India, with simultaneous editions from New Delhi, Mumbai, Lucknow, Patna, Ranchi and Chandigarh.

A 1999 stamp dedicated to the 75th anniversary of Hindustan Times

Hindustan Times was founded in 1924 by Sunder Singh Lyallpuri, founder-father of the Akali movement and the Shiromani Akali Dal in Punjab Province.[11] S Mangal Singh Gill (Tesildar) and S. Chanchal Singh (Jandiala, Jalandhar) were made in charge of the newspaper. Madan Mohan Malaviya and Tara Singh were among the members of the Managing Committee. The Managing Chairman and Chief Patron was Master Sunder Singh Lyallpuri.

According to Prem Shankar Jha who wrote an official history of the newspaper in 1999, most of the early funding of the paper, therefore, came from Sikhs in Canada. When financial troubles started in the early years, the Akalis approached two interested potential buyers from the nationalist movement. These were Motilal Nehru and Madan Mohan Malaviya, and ultimately Malviya bought the Hindustan Times. In fact, Malviya had to take out a loan of Rs. 40,000 with the help of Lala Lajpat Rai in order to finance the paper. In 1928, Gandhi chose a new editor, K.M Panikkar for the paper. By that time, the paper was running into financial troubles again and G. D. Birla underwrote some expenses and ultimately assumed ownership.[12]

Devdas Gandhi, son of Mahatma Gandhi, was inducted into the editors' panel, and was later appointed editor.[13] The opening ceremony was performed by Mahatma Gandhi on 26 September 1924. The first issue was published from Naya Bazar, Delhi (now Swami Sharda Nand Marg). It contained writings and articles from C. F. Andrews and Cattamanchi Ramalinga Reddy, among others.

K. M. Panikkar, also known as Sardar Panikkar, launched the Hindustan Times as a serious nationalist newspaper. As an Oxonian, historian and litterateur, Panikkar strived to make the paper broader than an Akali sheet. He became the editor and funds flowed freely from Akali patrons. He exerted himself strenuously, but the paper made very little headway. In two years, Panikkar could not take the print order any higher than 3,000. By then the Akali movement appeared to lose steam and funds dried up. The paper was saved from an untimely demise when Pandit Madan Mohan Malaviya stepped in to realise his vision of a newspaper in Delhi.[14]

It has its roots in the Indian independence movement of the first half of the twentieth century and even faced the noted "Hindustan Times Contempt Case (August–November, 1941)" at Allahabad High Court.[15] It was edited at times by many important people in India, including Devdas Gandhi, Sri Mulgaonkar, B.G. Verghese and Khushwant Singh. Sanjoy Narayan was editor in chief of the paper from August 2008 till July 2016.[16] 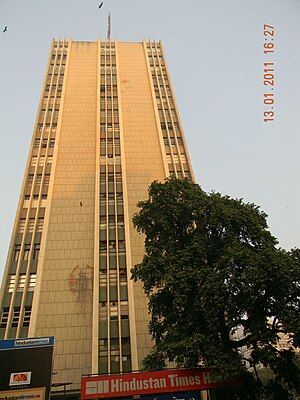 The Delhi-based Hindustan Times is part of the KK Birla group and managed by Shobhana Bhartia, Rajya Sabha member of Congress Party and daughter of the industrialist Krishna Kumar Birla and granddaughter of Ghanshyam Das Birla. HT Media[17] Limited is a subsidiary of The Hindustan Times Limited which is a subsidiary of Earthstone Holding (Two) Limited. The KK Birla group owns a 69 percent stake in HT Media, currently valued at ₹ 834 crore. When Shobhana Bhartia joined Hindustan Times in 1986, she was the first woman chief executive of a national newspaper. Shobhana has been nominated as a Rajya Sabha MP from Congress Party.

After the "surgical strikes" had happened in September 2016, Shobhna Bhartia reportedly had started getting calls from the PM's office and from Amit Shah, and attention came to be focused on the Hate Tracker, a crowd-sourced database on the Hindustan Times website that recorded hate crimes in India which was launched under recently appointed editor Bobby Ghosh.[12] He left the newspaper abruptly and The Wire reported[20] that he was asked to leave the newspaper after Shobhana Bhartia met Prime Minister Narendra Modi recently.