Jump to content
From Bharatpedia, an open encyclopedia
(Redirected from States and territories of India) 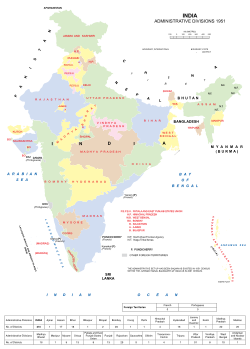 Administrative divisions of India in 1951

The Indian subcontinent has been ruled by many different ethnic groups throughout its history, each instituting their own policies of administrative division in the region.[2][3][4][5][6][7][8][9][10][11][12][excessive citations] The British Raj mostly retained the administrative structure of the preceding Mughal Empire. India was divided into provinces (also called Presidencies), directly governed by the British, and princely states, which were nominally controlled by a local prince or raja loyal to the British Empire, which held de facto sovereignty (suzerainty) over the princely states.

Between 1947 and 1950 the territories of the princely states were politically integrated into the Indian union. Most were merged into existing provinces; others were organised into new provinces, such as Rajasthan, Himachal Pradesh, Madhya Bharat, and Vindhya Pradesh, made up of multiple princely states; a few, including Mysore, Hyderabad, Bhopal, and Bilaspur, became separate provinces. The new Constitution of India, which came into force on 26 January 1950, made India a sovereign democratic republic. The new republic was also declared to be a "Union of States".[13] The constitution of 1950 distinguished between three main types of states:[citation needed]

Andhra State was created on 1 October 1953 from the Telugu-speaking northern districts of Madras State.[14]

The States Reorganisation Act, 1956 reorganised the states based on linguistic lines resulting in the creation of the new states.[20]

As a result of this act:

Bombay State was split into the linguistic states of Gujarat and Maharashtra on 1 May 1960 by the Bombay Reorganisation Act.[21] The former Union Territory of Nagaland achieved statehood on 1 December 1963.[22] The Punjab Reorganisation Act, 1966 resulted in the creation of Haryana on 1 November and the transfer of the northern districts of Punjab to Himachal Pradesh.[23] The act also designated Chandigarh as a union territory and the shared capital of Punjab and Haryana.[24][25]

Madras State was renamed Tamil Nadu in 1969. The north-eastern states of Manipur, Meghalaya and Tripura were formed on 21 January 1972.[26] Mysore State was renamed Karnataka in 1973. On 16 May 1975, Sikkim became the 22nd state of the Indian Union and the state's monarchy was abolished.[27] In 1987, Arunachal Pradesh and Mizoram became states on 20 February, followed by Goa on 30 May, while erstwhile union territory of Goa, Daman and Diu's northern exclaves Damão and Diu became a separate union territory as Daman and Diu.[28]

Pondicherry was renamed Puducherry in 2007 and Orissa was renamed Odisha in 2011. Telangana was created on 2 June 2014 from ten former districts of north-western Andhra Pradesh.[33][34]

The Sixth Schedule of the Constitution of India allows for the formation of autonomous councils to administer areas which have been given autonomy within their respective states.[53] Most of these autonomous areas are located in Northeast India.

The Constitution of India distributes the sovereign executive and legislative powers exercisable with respect to the territory of any State between the Union and that State.[54]