National Democratic Alliance (NDA) (IAST: Rāṣṭrīya Janatāṃtrika Gaṭhabaṃdhana) is an Indian big tent political alliance led by the right-wing Bharatiya Janata Party (BJP).[1] It was founded in 1998 and currently controls the government of India as well as the government of 18 Indian states, and 3 Union Territories.

Its first chairman was Prime Minister Atal Bihari Vajpayee. L. K. Advani, the former Deputy Prime Minister, took over as chairman in 2004 and served until 2014, and Amit Shah has been the chairman since 2014. The coalition ruled from 1998 to 2004. The alliance returned to power in the 2014 general elections with a combined vote share of 38.5%.[2] Its leader Narendra Modi was sworn in as Prime Minister of India on 26 May 2014. In the 2019 general election, the alliance further increased its tally to 353 seats with combined vote share of 45.43%.[3] 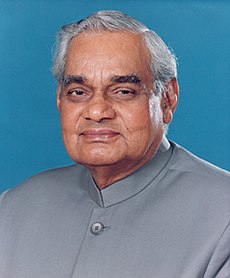 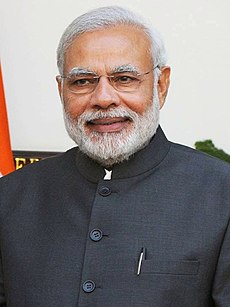 The NDA was formed in May 1998 as a coalition to contest the general elections. The main aim of the NDA was to form an anti-Indian National Congress coalition. It was led by the BJP, and included several regional parties, including the Samata Party and the AIADMK, as well as Shiv Sena, but Shiv Sena broke away from the alliance in 2019 to join the Maha Vikas Aghadi with Congress and the NCP. Samata Party is also broke away from alliance in 2003 after formation of Janta Dal (United). The Shiv Sena was the only member which shared the Hindutva ideology of the BJP.[4][5] After the election, it was able to muster a slim majority with outside support from the Telugu Desam Party, allowing Atal Bihari Vajpayee to return as prime minister.[6]

The government collapsed within a year because the AIADMK withdrew its support. After the entry of a few more regional parties, the NDA proceeded to win the 1999 elections with a larger majority. Vajpayee became Prime Minister for a third time, and this time served a full five-year term.[7]

The NDA called elections in early 2004, six months ahead of schedule. Its campaign was based around the slogan of "India Shining" which attempted to depict the NDA government as responsible for a rapid economic transformation of the country. However, the NDA suffered a defeat, winning only a 186 seats in the Lok Sabha, compared to the 222 of the United Progressive Alliance led by the Congress, with Manmohan Singh succeeding Vajpayee as prime minister. Commentators have argued that the NDA's defeat was due to a failure to reach out to the rural masses.[8][9]

The National Democratic Alliance does not have a formal governing structure such as an executive board or politburo. It has been up to the leaders of the individual parties to make decisions on issues such as sharing of seats in elections, allocation of ministries and the issues that are raised in Parliament. Given the varied ideologies among the parties, there have been many cases of disagreement and split voting among the allies. 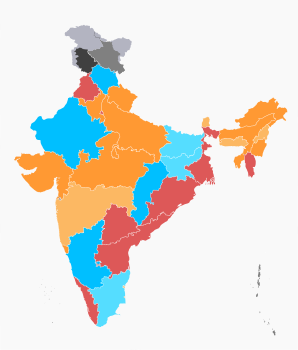 The BJP has previously been the sole party in power in Delhi, Chhattisgarh, Jharkhand and Rajasthan. It has also ruled Jammu and Kashmir, Punjab, Odisha, Andhra Pradesh as part of coalition and alliance governments.

The BJP has never been in power in 3 states - Kerala, Telangana, (between 1999 and 2004 BJP in alliance with TDP ruled a United Andhra Pradesh) and West Bengal. But BJP led NDA has ruled many local governing institutions including corporations, municipalities, panchayats and has also been elected to many Lok Sabha constituencies, state assembly constituencies and local body divisions and wards in these 3 states.

Note that it refers to nomination by alliance, as the offices of President and Vice President are apolitical.

This list is incomplete; you can help by adding missing items with reliable sources.

Shiv Sena exited from the NDA, as BJP is not wiling to agree for Sharing CM Post with Shiv Sena to form government in Maharashtra.[103]