This article is about the region administered by India as a union territory. For other uses, see Jammu and Kashmir and Kashmir (disambiguation).

Jammu and Kashmir[lower-alpha 2] is a region administered by India as a union territory[1] and consisting of the southern portion of the larger Kashmir region, which has been the subject of a dispute between India and Pakistan since 1947, and between India and China since 1962.[3][18] The Line of Control separates Jammu and Kashmir from the Pakistani-administered territories of Azad Kashmir and Gilgit-Baltistan in the west and north. It lies to the north of the Indian states of Himachal Pradesh and Punjab and to the west of Ladakh, which is also subject to the dispute as a part of Kashmir, and administered by India as a union territory.[2]

Jammu and Kashmir is named after the two regions it encompasses – the Jammu region and the Kashmir Valley.

Jammu and Kashmir had three distinct areas: Hindu-majority Jammu region, Muslim-majority Kashmir Valley and Buddhist-dominated Ladakh.[27] Unrest and violence persisted in the Kashmiri Valley and, following a disputed state election in 1987, an insurgency persisted in protest over autonomy and rights.[27][28]

The Bharatiya Janata Party (BJP) came to power in the 2014 Indian general election and five years later included in their 2019 election manifesto the revocation of Article 370 of the Constitution of India, in order to bring Jammu and Kashmir to equal status with other states.[27]

A resolution to repeal Article 370 was passed by both the houses of the Parliament of India in August 2019. At the same time, a reorganisation act was also passed, which would reconstitute the state into two union territories, Jammu and Kashmir and Ladakh.[29] The reorganisation took effect from 31 October 2019.[19]

In September 2019 nearly 4,000 people, including two former Chief Ministers and hundreds of other politicians, were arrested by the Indian authorities in Kashmir;[30] the state was put under a lockdown and communication and internet services were suspended.[31]

Topographic map of Jammu and Kashmir, with visible altitude for the Kashmir valley and Jammu region.

Jammu and Kashmir is home to several valleys such as the Kashmir Valley, Tawi Valley, Chenab Valley, Poonch Valley, Sind Valley and Lidder Valley.[32] The Kashmir valley is 100 km (62 mi) wide and 15,520.3 km2 (5,992.4 sq mi) in area.[33] The Himalayas divide the Kashmir valley from the Tibetan plateau while the Pir Panjal range, which encloses the valley from the west and the south, separates it from the Punjab Plain of the Indo-Gangetic Plain.[34] Along the northeastern flank of the Valley runs the main range of the Himalayas.[35] This valley has an average height of 1,850 metres (6,070 ft) above sea-level,[33] but the surrounding Pir Panjal range has an average elevation of 10,000 feet (3,000 m).[36] The Jhelum River is the major Himalayan river which flows through the Kashmir valley.[37] The southern Jammu region is mostly mountainous, with the Shivaliks, the middle and the great Himalayas running parallel to each other in a southeast-northwest direction. A narrow southwestern strip constitutes fertile plains. The Chenab, Tawi and Ravi are important rivers flowing through the Jammu region.[38]

The climate of Jammu and Kashmir varies with altitude and across regions. Southern and southwestern areas have a sub tropical climate, with hot summers and cool winters. This region receives most of its rainfall during the monsoon season. In the east and north, summers are usually pleasant. The effect of the monsoon diminishes in areas lying to the leeward side of the Pir Panjal, such as the Kashmir valley, and much of the rainfall happens in the spring season due to western disturbances. Winters are cold, with temperatures reaching sub-zero levels. Snowfall is common in the valley and the mountain areas. 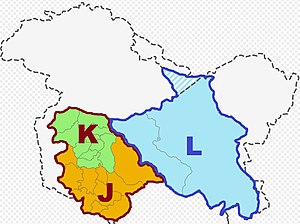 The union territory of Jammu and Kashmir consists of two divisions: Jammu Division and Kashmir Division, and is further divided into 20 districts.[39]

Jammu and Kashmir has two major airports at the two capitals of the territory: Jammu Airport at Jammu and Sheikh ul Alam Airport at Srinagar, which is also the only international airport in the territory. These airports have regular flights to Delhi, Mumbai, Bangalore, Chandigarh and other major cities of the country.

The under-construction Jammu-Baramulla line of the Northern Railways is the only railway line in the territory. Once complete, the line will connect the two regions of Jammu and Kashmir and will also provide a rail link to the Kashmir valley from other parts of the country.

As per the 2011 census, Jammu and Kashmir has a total population of 12,267,013. The sex ratio is 889 females per 1000 males. Around 7.6% of the population is scheduled caste and 10.9% belong to the scheduled tribes, mainly Gujjar, Bakerwal, and Gaddi. The SCs are mostly concentrated in the Jammu region.

Muslims constitutes the majority of the population of Jammu and Kashmir with a large Hindu minority.[60]

The Kashmir Division is largely Muslim (96.41%) with a small Hindu (2.45%) and Sikh (0.81%) population. Majority of the Muslims in Kashmir are Sunni Muslims. The Budgam district is the only district with a larger population of Shias.[61] Shias form 30–40% of Budgam district's population. [62]

Jammu & Kashmir: mother-tongue of population, according to the 2011 Census of India.[63]

The most widely spoken language in Jammu and Kashmir is Kashmiri, the mother tongue of 52.72% of the population according to the 2011 census. The second most spoken language is Dogri, spoken by 20% of the population. Other major languages include Gojri (9.1%) and Pahari (7.8%). The remaining population speaks languages such as Punjabi, Bhaderwahi, Siraji, Bauti, Purkhi etc. Urdu is also widely understood and spoken, particularly in the Kashmir region where it acts as the lingua franca alongside Kashmiri and also serves as a medium of instruction along with English, while Hindi is taught and understood in the southern areas of Jammu.

Main article: List of institutions of higher education in Jammu and Kashmir 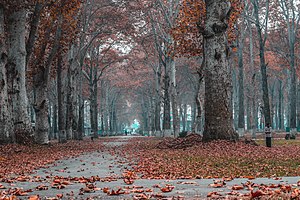 University of Kashmir during autumn

The President of India appoints a Lieutenant Governor for the union territory.[64]

Elections for the Jammu and Kashmir Legislative Assembly are to be held following the implementation of new constituency boundaries which is expected to be completed in 2021.[65] 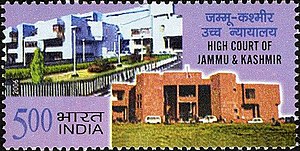 The Jammu and Kashmir High Court on postal stamps of India

Jammu and Kashmir in the Parliament of India[edit | edit source]

Jammu and Kashmir sends five members (MPs) to the lower house of the Indian parliament (the Lok Sabha) and four members to the upper house (the Rajya Sabha).

Apples of Kashmir are famous for their taste 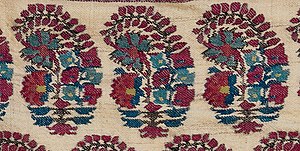 Jammu and Kashmir's economy is primarily services-based and agriculture-oriented.[67] The gross domestic product of Jammu and Kashmir is estimated at ₹1.76 lakh crore (US$25 billion) in 2020–21.[68]

The Kashmir Valley is known for its sericulture and cold-water fisheries.[69] Wood from Kashmir is used to make high-quality cricket bats, popularly known as Kashmir Willow.[70] Major agricultural exports from Jammu and Kashmir include apples, pears, cherries, plums, saffron and walnuts.[71] The traditional Kashmiri handicrafts industry employs a large workforce of around 340 thousand artisans and has potential for producing export goods.[67] Small-scale cottage industries include carpet weaving, silks, shawls, basketry, pottery, copper and silverware, papier-mâché and walnut wood.[67] The horticulture sector is the next biggest source of income in the economy. The temperature of Jammu and Kashmir is also suited to floriculture and can support various species of flora.[67]

Over 500 mineral blocks are present in Jammu and Kashmir, 261 of which are in the Kashmir Division alone.[72] Kishtwar is known as the 'land of sapphire and saffron'.[73] Resources such as timber, herbs and medicinal shrubs, edibles such as mushroom, chilgoza, black zeera and saffron are available in the forests.[74] The sapphire reserve mines of Machail, Paddar are a source of mineral wealth.[74] Jammu and Kashmir is the only administrative unit in India with a large amount of borax and sapphire resources.[72] It possesses 36 percent of the graphite, 21 percent marble and 14 percent of gypsum present in India.[72] Coal, limestone and magnesite are found scattered among the different districts of the union territory.[72]

Other minerals of significance that occur are bauxite, ball clay and china clay in Udhampur; bentonite in Jammu; diaspore in Rajouri and Udhampur; graphite in Baramulla; lignite and marble in Kupwara; quartz and silica sand in Anantnag, Doda and Udhampur; and quartzite in Anantnag district.[72] In addition, the Department of Geology and Mining has determined the presence of minerals such as magnetite, dolomite, fuel mineral, decorative building stones, slate and gemstones, materials with commercial and industrial uses in many products and factories.[72]

In the fiscal year 2019–20, total exports from Jammu and Kashmir amounted to ₹188.18 million (US$2.6 million).[67] The Jammu & Kashmir Bank, which is listed as a NIFTY 500 conglomerate, is based in the union territory.[75] Jammu and Kashmir is one of the largest recipients of grants from the central government annually.[76] According to the Sustainable Development Goals Index 2021, 10.35 percent of the population of Jammu and Kashmir live below the national poverty line, the third-highest among union territories in the country.[77]

The Telecom Regulatory Authority of India (TRAI) regulates all major aspects pertaining to media and telecommunications in Jammu and Kashmir.[78] In addition, the Jammu and Kashmir administration released their media policy in 2020 which enabled government officers to sanction journalists and media organisations for disseminating "fake news," and is valid for the next five years.[79] The policy attracted criticism for allegedly reducing people to "passive recipients of the information the government intends to disseminate."[80] The Press Council of India (PCI) expressed concern over the provisions of fake news in the policy, as it "interferes with the free functioning of the press."[81]

Sports tournaments in Jammu and Kashmir are organised by both the Indian army and police, as well as mainstream political parties and the All Parties Hurriyat Conference.[89] Sportspersons who represent India in tournaments face stigmatisation from separatists.[89]

Jammu and Kashmir has 18 stadiums, 23 training centres, three indoor sports complexes and 42 government-maintained playing fields.[90] Srinagar is home to the Sher-i-Kashmir Stadium, a stadium where international cricket matches have been played.[91] The Maulana Azad Stadium in Jammu is one of the home venues for the Jammu and Kashmir cricket team.[92] The Bakshi Stadium in Srinagar, named after Bakshi Ghulam Mohammad, hosts football matches.[93]

Institutions such as the Jawahar Institute of Mountaineering and Winter Sports provides mountaineering, skiing and adventure courses.[94] The Royal Springs Golf Course, Srinagar, located on the banks of Dal lake, is considered one of the best golf courses of India.[95] Jammu and Kashmir was also host to the first Khelo India Winter Games, held in 2020 in Gulmarg.[96] Jammu and Kashmir came first with the most gold medals at 26, followed by the Indian Army team with 8 gold medals.[97] The second edition of the winter games were also held in Gulmarg in 2021, with Jammu and Kashmir coming first again.[98]

Some major tourist attractions in Jammu and Kashmir are Srinagar, the Mughal Gardens, Gulmarg, Pahalgam, Patnitop and Jammu. Every year, thousands of Hindu pilgrims visit holy shrines of Vaishno Devi and Amarnath which has had significant impact on the state's economy.[99]

Jammu and Kashmir is also famous for its scenic beauty, flower gardens, apple farms and more. It attracts tourists for its unique handicrafts and the world-famous Kashmiri Shawls.