Panchayats cover about 96% of India's more than 5.8 lakh (580,000) villages and nearly 99.6% of the rural population. As of 2020, there were about 3 million elected representatives at all levels of the panchayat, nearly 1.3 million are women. These members represent more than 2.4 lakh (240,000) gram panchayats, about over 6,672 were intermediate level panchayat samitis at the block level and more than 500 zila parishads at district level.[5] Following the 2013 local election, 37.1% of councillors were women, and in 2015/16 local government expenditure was 16.3% of total government expenditure.[1]

Committees for the study of issues[edit]

Various committees were formed to study the issues and make recommendations for the implementation of local self governance in India.

In 1957, a committee led by Balwant Rai Mehta Committee studied the Community Development Projects and the National Extension Service and assessed the extent to which the movement had succeeded in utilising local initiatives and in creating institutions to ensure continuity in the process of improving economic and social conditions in rural areas. The Committee held that community development would only be deep and enduring when the community was involved in the planning, decision-making and implementation process.[6] The suggestions were for as follows:[7]

The PRI structure did not develop the requisite democratic momentum and failed to cater to the needs of rural development. There are various reasons for such an outcome which include political and bureaucratic resistance at the state level to share power and resources with local-level institutions, the domination of local elites over the major share of the benefits of welfare schemes, lack of capability at the local level and lack of political will.

It was decided to appoint a high-level committee under the chairmanship of Ashok Mehta to examine and suggest measures to strengthen PRIs. The Committee had to evolve an effective decentralised system of development for PRIs. They made the following recommendations:[8]

that much of the developmental functions at the district level would be played by the panchayats.

The states of Karnataka, Andhra Pradesh and West Bengal passed new legislation based on this report. However, the flux in politics at the state level did not allow these institutions to develop their own political dynamics.

The G.V.K. Rao Committee was appointed by Planning Commission[9] to once again look at various aspects of PRIs. The Committee was of the opinion that a total view of rural development must be taken in which PRIs must play a central role in handling people's problems. It recommended the following:[10]-

A committee led by Laxmi Mall Singhvi was constituted in the 1980s to recommend ways to revitalize PRIs. The Gram Sabha was considered as the base of a municipality decentralised, and PRIs viewed as institutions of self-governance which would actually facilitate the participation of the people in the process of planning and development. It recommended:[11]

Following laws and subsequent amendments were passed to implement the selected recommendations of various committees.

The idea which produced the 73rd and Amendment[12] was not a response to pressure from the grassroots, but to an increasing recognition that the institutional initiatives of the preceding decade had not delivered, that the extent of rural poverty was still much too large and thus the existing structure of government needed to be reformed. This idea evolved from the Centre and the state governments. It was a political drive to see PRIs as a solution to the governmental crises that India was experiencing.

The Constitutional (73rd Amendment) Act, passed in 1992 by the Narasimha Rao government, came into force on April 24, 1993. It was meant to provide constitutional sanction to establish "democracy at the grassroots level as it is at the state level or national level". Its main features are as follows:[13]

The following 3 types of democratically elected urban local governance bodies in India are called municipalities and abbreviated as the "MC". These are classified based on the size of the population of the urban settlement.[14]

All municipal acts in India provide for functions, powers and responsibilities to be carried out by the municipal government. These are divided into two categories: obligatory and discretionary.

The discretionary functions of MC include the laying out of areas, securing or removal of dangerous buildings or places, construction and maintenance of public parks, gardens, libraries, museums, rest houses, leper homes, orphanages and rescue homes for women, public buildings, planting of trees and maintenance of roads, housing for low income groups, conducting surveys, organizing public receptions, public exhibitions, public entertainment, provision of transport facilities with the municipality, and promotion of welfare of municipal employees.

Some of the functions of the urban bodies overlap with the work of state agencies. The functions of the municipality, including those listed in the Twelfth Schedule to the Constitution, are left to the discretion of the state government. Local bodies have to be bestowed with adequate powers, authority and responsibility to perform the functions entrusted to them by the Act. However, the Act has not provided them with any powers directly and has instead left it to state government discretion.[15]

The democratically elected local self-governance bodies in the villages of rural India are called Panchayati Raj Institutions (PRIs) which are based on the vedic era native democratic panchayat (Council of five officials) system.[16][17]

The following 3 hierarchies of PRI panchayats exist in states or Union Territories with more than two million inhabitants:

The panchayati raj system is a three-tier system with elected bodies at the village, taluk and district levels. The modern system is based in part on traditional {Panchayati raj, Panchayat governance}, in part on the vision of (Mahatma Gandhi) and in part by the work of various committees to harmonize the highly centralized Indian governmental administration with a degree of local autonomy.[18] The result was intended to create greater participation in local government by people and more effective implementation of rural development programs. Although, as of 2015, implementation in all of India is not complete, the intention is for there to be a gram panchayat for each village or group of villages, a tehsil level council, and a zilla panchayat at the district level.

Defined in the Part IX of the Indian Constitution,[19][20] these are responsible for the 29 subjects listed in the Eleventh Schedule including the "economic development, and strengthening social justice."[17]

Local bodies by states of India[edit] 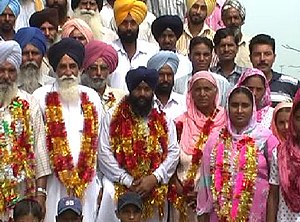 The Constitution of India visualises panchayats as institutions of self-governance. However, giving due consideration to the federal structure of India's polity, most of the financial powers and authorities to be endowed on panchayats have been left at the discretion of concerned state legislatures. Consequently, the powers and functions vested in PRIs vary from state to state. These provisions combine representative and direct democracy into a synergy and are expected to result in an extension and deepening of democracy in India. Hence, panchayats have journeyed from an institution within the culture of India to attain constitutional status.