From Bharatpedia, an open encyclopedia
Jump to navigation Jump to search
This article is about the municipality in India. For its namesake district, see Belagavi District. For the country, see Belgium.

Belgaum (ISO: Bēḷagāma; also Belgaon[1] and officially known as Belagavi)[8][9] is a city in the Indian state of Karnataka located in its northern part along the Western Ghats. It is the administrative headquarters of the eponymous Belgaum division and Belgaum district. The Government of Karnataka has proposed making Belgaum the second capital of Karnataka, hence a second state administrative building Suvarna Vidhana Soudha was inaugurated on 11 October 2012.[10]

Belgaum has been selected in first phase out of 20 cities, as one of the hundred Indian cities to be developed as a smart city under PM Narendra Modi's flagship Smart Cities Mission.[11] 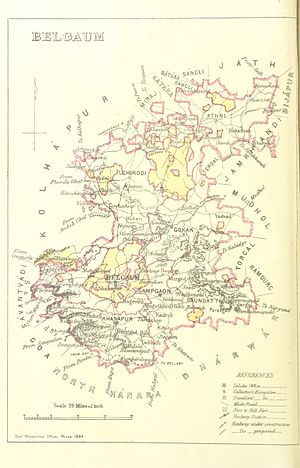 Belgaum was founded in late 12th century AD by the Ratta dynasty, who shifted from nearby Saundatti. A Ratta official named Bichiraja built Kamal Basadi, a Jain temple, dedicated to Neminatha in 1204, which came to be called Kamalabasti. Pillars found inside Belgaum fort have Kannada inscriptions in Nagari scripts, one from 1199 by Ratta King Kartaveerya IV. The city original name was Venugrama, a Sanskrit word which means "village of bamboo". Alternatively, it is referred to as Venupura in early Indian texts, which means "city of bamboo".[12]

Belgaum became a part of the Yadava dynasty kingdom (Sevunas) in early 13th century. An inscription from 1261 of King Krishna belonging to the Yadava dynasty attests to this. The region was invaded by Khalji dynasty of Delhi Sultanate in 14th century. Shortly thereafter, the Vijayanagara Empire was founded, and Belgaum came under the rule of Vijayanagara. In 1474, the Bahmani Sultanate conquered Belgaum with an army led by Mahamood Gawan.[13]

Mahatma Gandhi at the Belgaum Congress 1924

The Belgaum fort was strengthened by the Adil Shah dynasty Sultans and they built the Safa Mosque. A Persian inscription states that the mosque was built by Asad Khan, a Bijapur Commander. In 1518, the Bahamani sultanate splintered into five small states and Belgaum became part of the Bijapur Sultanate. The Adilshahis extended their control to the port of Goa, but retreated after the arrival and wars with the Portuguese. In 1686, the Mughal emperor Aurangzeb overthrew the Bijapur sultanate and Belgaum passed nominally to the Mughals, who called it "Azamnagar".[13] However, the Mughal empire control collapsed after the death of Aurangzeb in 1707. The Maratha confederacy took control of the area during the rule of the Peshwas. In 1776, the region was overrun by Hyder Ali and Tipu Sultan after Hyder Ali's coup in the Kingdom of Mysore. The Peshwa regained Belgaum, after Tipu Sultan was defeated by the British forces. In 1818, the British annexed Belgaum and the region in the control of the Peshwa. Kitturu Chennamma (1778–1829) was the queen of the princely state of Kittur in Karnataka and in 1824 she led an unsuccessful armed rebellion against the British in response to the Doctrine of lapse.

Belgaum was chosen as the venue of the 39th session of the Indian National Congress in December 1924 under the presidency of Mahatma Gandhi. The city served as a major military installation for the British Raj, primarily due to its proximity to Goa, which was then a Portuguese territory. Once the British left India, the Indian government continued and still continues to have armed forces installations in Belgaum. In 1961, the Indian government, under Prime Minister Jawaharlal Nehru, used forces from Belgaum to end Portuguese rule of Goa.

When India became independent in 1947, Belgaum and its district were part of Bombay State. In 1956, the Indian states were reorganised along linguistic lines by the States Reorganisation Act and Belgaum District (except Chandgad Taluk) was transferred to Mysore State, which was renamed Karnataka in 1972.

In 2006, the Government of Karnataka announced that Belgaum would be made the state's second capital, and that the city would be a permanent venue for the annual 15-day winter session of the state legislature.[14]

On 1 November 2014, the city's name was changed from Belgaum to Belagavi by the Karnataka government, with approval of the central government of India along with 12 other cities.[15][16] Belgaum is known as Belgaon (IPA: [beːɭɡaːʋ]) in Maharashtra and amongst Marathi people.

Belgaum has a tropical savanna climate (Köppen climate classification Aw). It is known for its pleasant year-round climate. Belgaum is at its coldest in winter (lowest temperature in Karnataka is usually recorded in Belgaum) and it experiences almost continuous monsoon rains from June through September. Belgaum sometimes receives hail storms during April.

The local languages spoken in this city are Kannada and Marathi language and official language is Kannada. There are also minority number of Urdu, Hindi and Konkani speakers. Hindi and English is understood by the people of the city.[citation needed]

Belgaum is an important source of vegetables, fruits, meat, poultry, fish, mining production, and wood (due to heavy rainfall, rivers and the abundance of water). Trading in North Karnataka is mainly with Goa and Maharashtra along with major cities like Pune, Bangalore and Mangalore. Rich deposits of Bauxite are found in Belgaum district and have led to the creation of the Indian aluminium-producing company Hindalco Industries of the Aditya Birla Group.[23] Uranium deposits have been found at Deshnur, a small village near Bailhongal town.[24]

A 300-acre (1.2 km2) Special Economic Zone (India's first Private Aerospace SEZ ) is being set up along the Pune-Bangalore National Highway (NH-4) to cater to the precision engineering requirements of the global aerospace, automotive and industrial verticals.[25]

On 11 November 2005, Karnataka Rakshna Vedike (KRV) activists daubed Belgaum Mayor Vijay More's face with black paint (and later surrendered to the police)[26] in the wake of Belgaum City Corporation (BCC) passing a resolution[27][28] to include the district of Belgaum into Maharashtra, a neighbouring state. Upon his return to Belgaum, Vijay More was served with several show-cause notices by the Government of Karnataka and later dissolved the council.[29]

Following this incident, in the following year's election, Prashanta Budavi, wife of KRV (Karnataka Rakshana Vedike) City President Shantinath Budavi was appointed as mayor of the Belgaum City Corporation. Maharashtra has asked to bring 865 disputed villages including Belgaum under centre's rule until Supreme court's final verdict. N.D. Patil, head of legal-committee appointed by Maharashtra government said that Karnataka is intensifying the problem. He added that Marathi people of border region are not able to live with honour and dignity under Karnataka's rule pointing out to the 'unconstitutional' dissolution of Belgaum city corporation and manhandling of Belgaum mayor by Kannada activists at Bangalore.[30]

Belgaum's salubrious climate, proximity to the coast and strategic position near Portuguese Goa commended it to the British as a suitable location for an army training centre and cantonment, which it continues to be today for the Indian Armed Forces, along with an air force station of the Indian Air Force. The British had a sizeable infantry post here, having realised the military importance of its geographical location.

Development of a rail network for movement of resources and later troops was one of the means employed by both the East India Company and the British to exert control over India. Belgaum houses the Maratha Light Infantry Regimental Centre (MLIRC). It also houses the Commando Training Wing which is a part of the Infantry School, Mhow, where the country's infantry commandos are trained in endurance, escape and evasion, guerrilla and commando warfare techniques and to live off the land. The commando course at Belgaum is mandatory for all infantry officers. Officers of other arms and services and even some foreign officers undertake the course. In between the military hospital and the commando training centre there lies the eminent Belgaum Military School, established in 1945 spread over an area of 64 acres (26 ha).

The Indo-Tibetan Border Police, ITBP, is building a full-fledged recreation and training centre in Belgaum at Halbhavi. Belgaum provides an excellent climate for recreation and ITBP will have large family bases in Belgaum for its soldiers after high altitude stressful duty.

The Central Reserve Police Force Institute of elite central paramilitary forces is setting up a national-level training institution (for jungle warfare) at Khanapur in Belgaum.

Belgaum is known for kunda, a sweet made from milk.[31] A special sweet called mandige in Kannada and in Marathi as maande,[32] is a prerequisite for weddings. There are few kunda manufacturers in and around Belgaum, famous among them is Camp Purohit sweets. Other well known sweets are karadant and ladagi laadu, which are delicacies that originate in Gokak, a taluk of Belgaum. North Karnataka meal is famous in the city.

Visvesvaraya Technological University (VTU), named after Bharat Ratna Sir M Visweshwariah, is located in Machhe in Belgaum. It has more than 208 affiliated colleges. Over 67,000 students graduate from VTU every year.[33]

Belgaum is connected by road via national highways 4 (connecting Maharashtra (now part of the Golden Quadrilateral), Karnataka, Telangana, Andhra Pradesh and Tamil Nadu) and 4A (connecting Karnataka and Goa). North Western Karnataka Road Transport Corporation (NWKRTC) run buses to all corners of Karnataka and to neighbouring states. There are many prominent private bus companies providing services to all major destinations in Karnataka and surrounding states. KSRTC services almost all villages in Karnataka. 92% villages are served by KSRTC (6,743 out of 7,298 Villages) and 44% in other areas. KSRTC operates 6463 schedules in a day covering an effective distance of 2374,000 km with a total fleet of 7599 buses. It transports, on an average, 2457,000 passengers per day.

NWKRTC operates its services to all villages, which have motorable roads in its jurisdiction, and also covers intra- and inter- state transport operations.

The Government of Goa operates KADAMBA bus service from Goa to Belgaum city and some other parts of the Belgaum District. 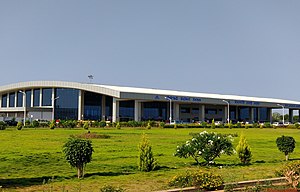 The city is served by Belgaum Airport at Sambra, which is the oldest airport in North Karnataka and lies 10 kilometres (6.2 mi) from the city on State Highway 20. Belgaum airport is included in UDAN 3 scheme. Alliance Air, Spice Jet, Star Air, IndiGo and TruJet have flights to Bangalore, Hyderabad, Mysore, Kadapa, Tirupati, Surat, Ahmedabad, Indore, Mumbai, Pune, Kolhapur, Nashik and Chennai. Flight connectivity to Jodhpur will be soon started by Star Air in the future days.[citation needed]

Belgaum railway station is on the Indian Railways grid, being part of the South Western railways, and is well connected by rail to major destinations.

Belgaum is located in the Belgaum Lok Sabha constituency.

In 2006, the Government of Karnataka decided to hold one week sessions of the Karnataka Legislative Assembly every year during the winter season at the Suvarna Vidhana Soudha administrative building, constructed and inaugurated in Belgaum in 2012. 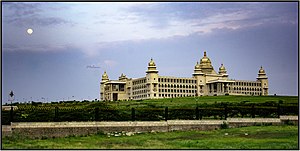 The city's humble industrial growth begin when an entrepreneur named Babu Rao Pusalkar set up a small unit in city over a century ago and that transformed Belagavi city into foundry and hydraulics base.[34]