The Indo-Tibetan Border Police (ITBP) is India's primary border patrol organization for its border with China's Tibet Autonomous Region. It is one of the five Central Armed Police Forces of India, raised on 24 October 1962, under the CRPF Act, in the wake of the Sino-Indian War of 1962.

In September 1996, the Parliament of India enacted the "Indo-Tibetan Border Police Force Act, 1992" to "provide for the constitution and regulation" of the ITBP "for ensuring the security of the borders of India and for matters connected therewith".[3][4] The first head of the ITBP, designated Inspector General, was Balbir Singh, a police officer previously belonging to the Intelligence Bureau. The ITBP, which started with 4 battalions, has, since restructuring in 1978, undergone expansion to a force of 60 Battalions with 15 Sectors and 05 Frontiers as of 2018[5] with a sanctioned strength of 89,432.[6] 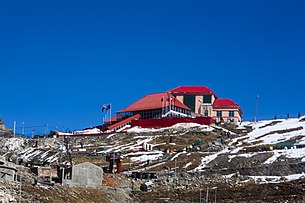 Indo-China border at Nathu La, is guarded by the ITBP

More than a year after the central government sanctioned raising of two commands of ITBP, the commands are now operationalised. ITBP shall have two commands one each at Chandigarh and Guwahati head by a cadre officer of ADG rank. Manoj Rawat, presently IG with ITBP HQ has been entrusted with the responsibility of raising the ITBP's Western Command at Chandigarh.[9]

ITBP is a multi-dimensional force which primarily has 5 functions: 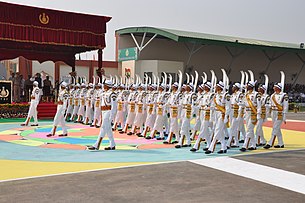 Ski Contingent of the ITBP during their 53rd Raising Day Parade, 2014

Presently, battalions of ITBP are deployed on border guard duties from Karakoram Pass in Ladakh to Diphu La in Arunachal Pradesh, covering 3,488  km of the India-China border. Manned border posts are at altitudes as high as 21,000 feet (6,400 m) in the western, middle & eastern sector of the border. ITBP is a mountain trained force and most of the officers & men are professionally trained mountaineers and skiers. The force is under an expansion plan in order to provide relief to its troops from constant deployment in high altitude areas under the dynamic and professional leadership of Subhash Goswami, IPS. 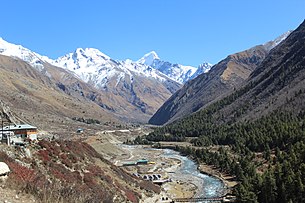 Chitkul Village, as seen from the road to the ITBP checkpost

ITBP's major training centre is located at Mussoorie, in Uttarakhand. The Training Academy has been established in 1976 and imparts training to Officers of the force. The training programme to Suboridnate Officers of the force are conducted at Central Training College Alwar and Basic Training College, Bhanu (Haryana). Specialised training programmes in rock craft, explosives handling etc. are also conducted here. Ace mountaineer and Padma Shri awardee, Harbhajan Singh, IG heads this institution. Keeping in view the evolving security scenario of the country, ITBP established a Counter Insurgency and Jungle Warfare School (CIJW) at an altitude of 6,000 feet in the heart of extremely tough Himalayan mountains, at Mahidanda in Uttarkashi district. The CIJW school provides training to ITBP's men and officers in anti-Naxal Operations. Jungle warfare, handling of explosives, rock craft, survival in adverse conditions, unarmed combat, and guerrilla warfare are some of the subjects trained here. On account of demands to realistic Anti naxal training the CIJW School of ITBP was shifted to Belgaum Karnataka

The training regime, formulated under the close supervision of Rajiv Mehta, IPS and executed on the ground by Sanjeev Raina, DIG is extremely demanding both mentally and physically, needing special preparation. The presence of the force along the Indo China border where it maintains vigil along the extremely difficult high altitude border area. The troops of the force keep a sharp eye on any violation of the border, trans-border smuggling, and affords a sense of security to the remotely located isolated settlements. The altitude where the troops are deployed range up to 18,800 feet and the temperature plummets to minus 30 degrees during winter with snowfall of more than ten feet.

The force is synonymous with adventure and dare-devilry and has undertaken numerous mountaineering expeditions. Its skiers have been national champions, who have competed winter Olympics. Its river rafters have created international history in rafting through the turbulent white waters of the mighty Brahmaputra, the Indus and the Ganges. The Force has created a milestone by becoming the first Central Para Military Force to grab up the Best Marching Contingent Trophy in the Republic Day parades in 1998, 1999, 2000 and 2011. It broke new ground in 1998 when it sent the first-ever police tableau of the country to participate in the Republic Day Parade. ITBP is at the forefront of a movement for the preservation of Himalayan environment and ecology. ITBP has taken up in a big way the task of greening the Himalayan regions especially in Inner Himalayas. Being the only human presence in areas close to China border, it has taken on itself the task of maintaining the delicate balance of flora and fauna.

ITBP being deployed in mountains has developed the expertise in rescue & relief operations in mountains, which entail different specialised skills of a very high standard. It is always first in extending rescue & relief in case of natural calamity. ITBP conducts a large number of civic action programmes in the remote border and terrorist affected areas to provide free and expert medical, health and hygiene care to the civilian population in remote villages. 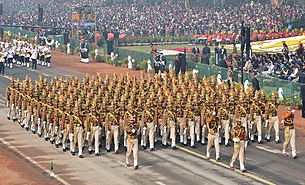 The ITBP Marching Contingent passes through the Rajpath, on the occasion of the 69th Republic Day Parade 2018

ITBP training centres develop amongst the trainees the qualities of: professional skills, esprit de corps and leadership. They are taught the values of integrity, impartiality and respect for all castes, creeds and religions. Maintaining the highest tradition of supreme sacrifice in the service of motherland the Himveers are also taught to function effectively while always keeping in mind human rights and the codes of war which always guide their conduct.

The Basic Training Centre at Bhanu, Haryana ITBP Academy at Mussourie, and the Mountaineering & Skiing Institute at Auli run the training programmes and conduct indoor and outdoor training activities, in pursuance of this mission.

ITBP has undergone a massive expansion plan to provide much needed relief to its troops who remain deployed in the tough high altitude terrain for most part of their service. 13 units were raised in the year 2006–07, followed by another 7 units the following year.

Personnel of veterinary wing of ITBP are trained in "Yak handling and Management", at ICAR-National Research Institute on Yak. Yaks are used by ITBP for transportation and logistics.

ITBP is building full fledge recreation and Training centre in Belgaum at Halbhavi, Belgaum provides the best climate for recreation and ITBP will relocate the personal and will have large family bases in Belgaum for its soldiers after high altitude stressful.

ITBP is the only Central Armed Police Force in India, which has combatised stress counsellors in its Field units, Formations Including the Ranks - Deputy Commandants ESC, Assistant Commandant-ESC, Inspector-ESC, Sub Inspector-ESC and Head Constable-ESC. These uniformed stress counsellors also play a major role in improving education for ITBP wards and the local children near ITBP Units. There are 21 ITBP Public Schools across the country run by ESC personnel of ITBPolice Force.[11] 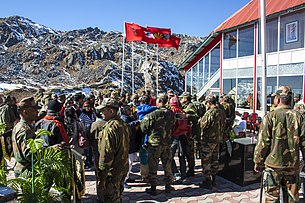 The ITBP organize an ice-hockey team which is considered one of the strongest in the country with many of its players also participating in the national team.[12] The team have won the Indian Ice Hockey Championship on at least three occasions, most recently in 2019.[13]