Shah Rukh Khan (pronounced [ˈʃɑːɦɾʊx xɑːn]; born 2 November 1965), also known by the initialism SRK, is an Indian actor, film producer, and television personality who works in Hindi films. He is referred to in the media as the "Baadshah of Bollywood" (in reference to his 1999 film Baadshah), "King of Bollywood" and "King Khan", he has appeared in more than 80 films, and earned numerous accolades, including 14 Filmfare Awards. The Government of India has awarded him the Padma Shri, and the Government of France has awarded him the Ordre des Arts et des Lettres and the Legion of Honour. Khan has a significant following in Asia and the Indian diaspora worldwide. In terms of audience size and income, he has been described as one of the most successful film stars in the world.[lower-alpha 1]

Khan began his career with appearances in several television series in the late 1980s. He made his Bollywood debut in 1992 with Deewana. Early in his career, Khan was recognised for portraying villainous roles in the films Baazigar (1993), Darr (1993), and Anjaam (1994). He then rose to prominence after starring in a series of romantic films, including Dilwale Dulhania Le Jayenge (1995), Dil To Pagal Hai (1997), Kuch Kuch Hota Hai (1998), Mohabbatein (2000) and Kabhi Khushi Kabhie Gham... (2001). Khan went on to earn critical acclaim for his portrayal of an alcoholic in Devdas (2002), a NASA scientist in Swades (2004), a hockey coach in Chak De! India (2007) and a man with Asperger syndrome in My Name Is Khan (2010). His highest-grossing films include the comedies Chennai Express (2013), Happy New Year (2014), Dilwale (2015), and the crime film Raees (2017). Many of his films display themes of Indian national identity and connections with diaspora communities, or gender, racial, social and religious differences and grievances.

As of 2015, Khan is co-chairman of the motion picture production company Red Chillies Entertainment and its subsidiaries and is the co-owner of the Indian Premier League cricket team Kolkata Knight Riders and the Caribbean Premier League team Trinbago Knight Riders. He is a frequent television presenter and stage show performer. The media often label him as "Brand SRK" because of his many endorsement and entrepreneurship ventures. Khan's philanthropic endeavours have provided health care and disaster relief, and he was honoured with UNESCO's Pyramide con Marni award in 2011 for his support of children's education and the World Economic Forum's Crystal Award in 2018 for his leadership in championing women's and children's rights in India. He regularly features in listings of the most influential people in Indian culture, and in 2008, Newsweek named him one of their fifty most powerful people in the world.[6] 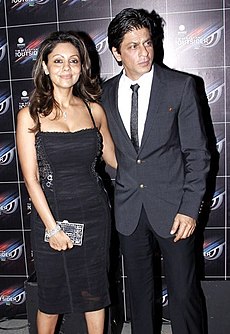 Khan with his wife Gauri Khan in 2012

Khan was born on 2 November 1965 into a Muslim family in New Delhi.[7] He spent the first five years of his life in Mangalore, where his maternal grandfather, Iftikhar Ahmed, served as the chief engineer of the port in the 1960s.[8][9][lower-alpha 2] Khan's father, Meer Taj Mohammed Khan, was an Indian independence activist from Peshawar who campaigned alongside the Khudai Khidmatgar, a nonviolent resistance movement led by Abdul Ghaffar Khan (also known as Bacha Khan or the "Frontier Gandhi") that sought a united and independent India.[11][12] Meer was a follower of Abdul Ghaffar Khan,[13] and affiliated with the Indian National Congress.[14] As of 2010, Khan's paternal family was still living in the Shah Wali Qataal area of Peshawar's Qissa Khwani Bazaar.[14] Meer moved to New Delhi in 1948 after the partition of India.[15] Khan's mother, Lateef Fatima, was the daughter of a senior government engineer.[16][lower-alpha 3] His parents were married in 1959.[19] Khan described himself on Twitter as "half Hyderabadi (mother), half Pathan (father), and some Kashmiri (grandmother)".[20] According to Khan, his paternal grandfather, Meer Jan Muhammad Khan, was originally from Afghanistan.[21][14][22] His paternal cousins in Peshawar claim that the family speaks Hindko and is originally from Kashmir, contradicting the claim that his grandfather was from Afghanistan.[14][23]

Khan grew up in the Rajendra Nagar neighbourhood of New Delhi.[24] His father had several business ventures including a restaurant, and the family lived a middle-class life in rented apartments.[25] Khan attended St. Columba's School in central Delhi where he excelled in his studies and in sports such as hockey and football,[26] and received the school's highest award, the Sword of Honour.[25] Initially Khan aspired to pursue a career in sports, however owing to a shoulder injury in his early years meant that he could no longer play.[27] Instead, in his youth, he acted in stage plays and received praise for his imitations of Bollywood actors, of which his favourites were Dilip Kumar, Amitabh Bachchan, and Mumtaz.[28] One of his childhood friends and acting partners was Amrita Singh, who became a Bollywood actress.[29] Khan enrolled at Hansraj College (1985–88) to earn his bachelor's degree in economics, but spent much of his time at Delhi's Theatre Action Group (TAG),[30] where he studied acting under the mentorship of theatre director Barry John.[31] After Hansraj, he began studying for a master's degree in mass communication at Jamia Millia Islamia, but left to pursue his acting career.[32] He also attended the National School of Drama in Delhi during his early career in Bollywood.[33] His father died of cancer in 1981,[lower-alpha 4] and his mother died in 1991 from complications of diabetes.[36] After the death of their parents, his older sister, Shahnaz Lalarukh (born 1960)[37] fell into a depressed state and Khan took on the responsibility of caring for her.[34][38] Shahnaz continues to live with her brother and his family in their Mumbai mansion.[39]

Although Khan was given the birth name Shahrukh Khan, he prefers his name to be written as Shah Rukh Khan, and is commonly referred to by the acronym SRK.[40] He married Gauri Chibber, a Punjabi Hindu, in a traditional Hindu wedding ceremony on 25 October 1991, after a six-year courtship.[41][42] They have a son Aryan (born 1997)[43] and a daughter Suhana (born 2000).[44] In 2013, they became parents of a third child, a son named AbRam,[45] who was born through a surrogate mother.[46] Both his elder children have expressed interest in entering the entertainment industry; Khan has stated that Aryan, who is studying film at the USC School of Cinematic Arts in California, aspires to become a writer-director,[47][48] while Suhana, who served as assistant director for Khan's film Zero (2018), is studying drama and acting at NYU's Tisch School of the Arts for higher education.[49][50] Suhana made her acting debut in November 2019, in a short film titled "The Grey Part of Blue."[51] According to Khan, while he strongly believes in Islam, he also values his wife's religion. His children follow both religions; at his home the Qur'an is situated next to the Hindu deities.[52]