Dr. Mangalampalli Balamuralikrishna (6 July 1930 – 22 November 2016) was an Indian Carnatic vocalist, musician, multi-instrumentalist, playback singer, composer, and character actor.[1][2] He was awarded the Madras Music Academy's Sangeetha Kalanidhi in 1978. He has garnered two National Film Awards (1976, 1987), the Sangeet Natak Akademi Award in 1975, the Padma Vibhushan, India's second-highest civilian honor in 1991, for his contribution towards arts, the Mahatma Gandhi Silver Medal from UNESCO in 1995, the Chevalier of the Ordre des Arts et des Lettres by the French Government in 2005, the Sangeetha Kalanidhi by Madras Music Academy, and the Sangeetha Kalasikhamani in 1991, by the Fine Arts Society, Chennai to name a few.[3]

Balamuralikrishna started his career at the age of six. In his life-time, he gave over 25,000 concerts worldwide.[4] Apart from Pandit Bhimsen Joshi, he presented jugalbandi concerts (duets) with Pandit Hariprasad Chaurasia, Pandit Ajoy Chakrabarty and Kishori Amonkar, among others. He is also known for popularizing the compositions of Sri Bhadrachala Ramadasu, Sri Annamacharya, and others.

Balamuralikrishna's concerts combined sophisticated vocal skills and rhythmic patterns of classical music with the popular demand for entertainment value. Balamuralikrishna presented concerts in many countries, including the US, Canada, UK, Italy, France, Russia, Sri Lanka, Malaysia, Singapore, countries in the Middle East, and elsewhere. Apart from his native tongue, Telugu, he has also composed in other languages including Kannada, Sanskrit, Tamil, Malayalam, Hindi, Bengali, and Punjabi.[5]

He appeared as a featured soloist with an award-winning British choir, performing the "Gitanjali Suite" with words from Rabindranath Tagore's Nobel Prize-winning poetry and music by "Dr. Joel", the noted UK-based Goan composer. His clear diction in several languages prompted an invitation to record Tagore's entire Rabindra Sangeet compositions in Bengali, preserving them for posterity. He had sung in French, and even ventured into jazz fusion, collaborating with the top Carnatic percussion teacher, Sri T.H. Subash Chandran, in a concert for Malaysian royalty.

M. Balamuralikrishna during Rajarani Music Festival at Bhubaneswar on 19 January 2013

Balamuralikrishna was born in Sankaraguptam, East Godavari District, Madras Presidency (now a part of Andhra Pradesh state).[6] His father, Mangalampalli Pattabhiramayya, was a well known musician and his mother, Suryakanthamma, was a veena player. Balamuralikrishna's mother died when he was an infant and he was raised by his father. Observing his interest in music, his father put him under the tutelage of Parupalli Ramakrishnayya Pantulu, a direct descendant of the shishya parampara (lineage of disciples) of Tyagaraja.[7] Under his guidance, the young Balamuralikrishna learned Carnatic music. At the age of eight, he gave his first full-fledged concert at a Thyagaraja Aradhana in Vijayawada. Musunuri Suryanarayana Murty Bhagavatar, a Harikatha performer, saw the musical talent in him and gave the prefix "Bala" (lit. child) to the young Balamuralikrishna.[8] (Prior to this, his name was Muralikrishna; following Bhagavatar's addition of the prefix, he began to be known as Balamuralikrishna.)

Having begun his musical career at a very young age, by age fifteen he had mastered all the 72 melakartha ragas and had composed krithis in each of them. His Janaka Raga Manjari was published in 1952 and recorded as Raagaanga Ravali in a nine-volume series by the Sangeeta Recording Company.[9] Not merely content with his fame as a Carnatic vocalist, he also played the kanjira, mridangam, viola, and violin.[10][11][12] He accompanied various musicians on the violin. He also presented solo viola concerts. He was the person who introduced viola to classical Indian music. [13][14]

Characteristic of Balamuralikrishna's musical journey have been his non-conformism, spirit of experimentation, and boundless creativity. Balamuralikrishna has experimented with the Carnatic music system by keeping its rich tradition untouched. Ragas such as Ganapathi, Sarvashri, Mahati, Lavangi etc. are credited to him. The ragas which he invented represent his quest for new frontiers. Ragas such as Lavangi are set to three or four notes in ascending and descending scale.[9] Ragas such as Mahathi, Lavangi, Sidhdhi, Sumukham that he created have only four notes; while his other ragaa creations such as Sarva Sri, Omkaari, and Ganapathy have only three notes.[15]

He also innovated in the tala (rhythm) system. He has incorporated "gati bhEdam" (గతి భేదం) in the "sashabda kriya" (సశబ్ద క్రియ). Actions that can produce sound/shabda (శబ్ద) in talas are called sashabda kriya - సశబ్ద క్రియ and are a part of the existing Tala chain. New chains are possible, too. Saint Arunagirinaadhar used to inject such systems in his famous Thirupugazh, but only as Sandham, while Balamuralikrishna is known to be the pioneer in bringing such Sandhams into a logical rhythm, with Angam and definition. Trimukhi, Panchamukhi, Saptamukhi, and Navamukhi are the basic classifications in his New Tala System.[16]

He gave his authorisation to S. Ram Bharati to found "Academy of Performing Arts and Research" in Switzerland. He also worked on music therapy. He established the 'MBK Trust' with the objective of developing art and culture and for carrying out extensive research into music therapy. A dance and music school, 'Vipanchee' is a part of this Trust.[17][15] He has authored a musical therapy research paper with Shreya Kappagantula regarding the "The Effects of Musical Therapy on Mental Disorders"

Balamuralikrishna has over 400 compositions to his credit and is one of the very few people to have composed in all the 72 Melakarta Ragas and has created several ragas, with 4 notes and 3 notes and also has invented a new Tala system. His compositions encompass every genre in Carnatic Music including Varnas, Krithis, Thillanas, Bhavageethas.[18] 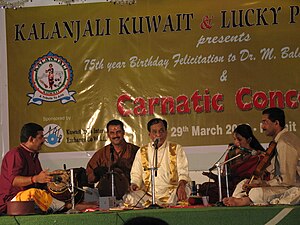 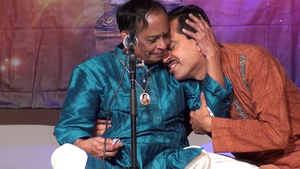 Mangalampalli Balamuralikrishna and Ravi Joshi, during a concert in San Francisco, California, April 2014

Balamuralikrishna has sung in several films in Telugu, Sanskrit, Malayalam, Kannada and Tamil.[19] He made his acting debut with the Telugu film Bhakta Prahlada (1967) as Narada, and has acted in a few other films in Telugu and Tamil.[16][20]

Balamuralikrishna passed away at his residence in Chennai on 22 November 2016; he was 86.[21] He died in deep sleep at around five in the evening, due to a cardiac arrest. He was cremated with full state honours at Besant Nagar Crematorium in Chennai the very next day. Thousands attended his funeral. He is survived by three daughters and three sons who are all Doctors.[22] His wife, Smt. Annapurna, outlived him for three months, and died on 16 February 2017.

His family has formed the Dr. M. Balamurali Krishna Memorial Trust to represent him after his death.

A documentary film, The Melody Man, was made on his life by the Government of India Films Division. The film was directed by National award winner Director Gul Bahar Singh.

Following this method, four Talas can be generated:

This scheme can be extended across all 35 sooladi thalas, however currently these four are in practice.

There have been many pallavis set to panchamukhi Tala such as 'Isai inbathirku ēdillaye ivulakil - sentamil' in ragam Lathangi composed by Amrutha Venkatesh and 'Aadi Vaa, Pirai Soodi Vaa, Aalavaai Naathane' in ragam Abheri composed by Rameshvaidya and tuned by S.J Jananiy and also others in Bilahari, Thodi and Kalyani composed by Dr. Balamuralikrishna himself.

There have also been Alarippus composed for Bharathanatyam in Panchamukhi.

Balamuralikrishna has composed songs few albums and has sung, list of albums and songs below

Balamuralikrishna acted in few films and gave his voice to some selected songs in Indian cinema.