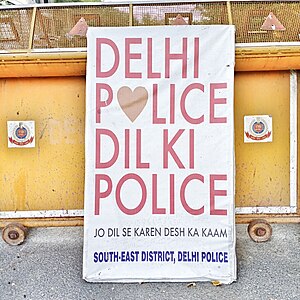 The new Delhi Police signage released amid the COVID-19 pandemic on 23 April 2020. It is also being used on Delhi Police social media accounts.[4][5] Also visible is the line "Jo dil se karen desh ka kaam" (transl. Delhi Police work for the country with all their heart).[4][5]

The Delhi Police (DP) is the law enforcement agency for the National Capital Territory of Delhi (NCT). Delhi Police comes under the jurisdiction of the Ministry of Home Affairs (MHA), Government of India.[6]:para7.5[7] In 2015, sanctioned strength of Delhi Police was 84,536 (including I.R. Battalions)[6]:para7.69 making it one of the largest metropolitan police forces in the world.[8] About 25% of Delhi Police strength is earmarked for VIP security.[9]

The headquarters of Delhi Police is located at Jai Singh Marg, Connaught Place, New Delhi. As of January 2019, there are 15 Districts of Delhi Police, each headed by a DCP or Deputy Commissioner of Police.

Delhi Police has its origin in a small security force, established in 1854, under the assistant of British Resident to the Mughal Imperial Courts.[10] Founded in 1861 after the adoption of the Indian Police Act, Delhi Police remained a part of the Punjab Police until India gained independence in 1947.

Before 1948 Delhi was part of Punjab Police.

In 1966, the Delhi Police on the basis of the Khosla Commission Report was reorganized. Four police districts, namely, North, Central, South and New Delhi were created.[11] In 1978, the Delhi Police Act was passed and the Commissioner System was introduced with effect from 1 July 1978.[6]:para7.69

Following the Sixth Central Pay Commission, the UPA Government, in 2008, decided to make promotions for Indian Police Service officers, even for higher ranks, time-bound. Indian Police Service officers are now promoted on a fixed time table, more or less independent of functional requirements or span of responsibility, up to the level of Inspector General of Police, at intervals of 4, 9, 13, 14, and 18 years of service.[12]:p 155–56, section 3 The time-bound promotion, much of it non-functional, to high ranks apart from increasing the burden on the policing budget has made Delhi Police top-heavy, sluggish, and unwieldy. Delhi Police, which had one Inspector General (IG) until January 1980s, now has 12 officers with ranks senior to IGPs. They are called Commissioners and Special Commissioners, who are in the HAG grades and apex pay grades. In addition, Delhi police, instead of one IGP, has several dozen IGPs, as everyone gets to be IGP after completion of 18 years service. New IG's functions and responsibilities are no different from that of pre-1980s DIGs and Superintendents of Police (SPs).[12]:Senior Duty Posts under Government of Delhi, p 177

Special CP (Training): The Special CP has a Deputy Commissioner of Police (DCP) answering to him. The Vice-Principal of Police Training College (P.T.C) answers to the DCP. 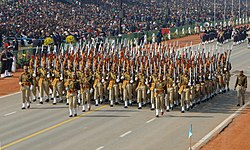 In 2015, Delhi Police under its Commissioner B.S. Bassi had 8 Special CP's, 20 Joint CP's and 15 Additional CP's followed by other sub-ordinates. The hierarchy in DP is as follows.

Since 1984, DP Training College is located in the village of Jharoda Kalan and Wazirabad, Delhi .[8] 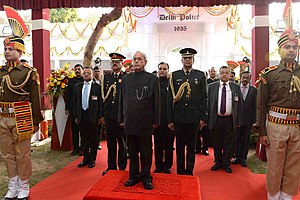 Delhi is the capital of India and is the centre of wide range of political, cultural, social and economic activities. The Delhi police has to play a number of roles so far maintenance of law and order is concerned. The Delhi Police undertakes the following activities:

Delhi Police is considered to be having the most advanced administrative system in India. It believes in the principle of 'Citizen First'. Traffic control is very important in order to avoid accidents and Delhi police has taken several measures to control the traffic.

Out of a total Delhi police strength of 77,965, in 2016, over 20,000 personnel or over 25 percent, were assigned to secure VVIPs in Delhi. Delhi Police Commissioner Alok Kumar Verma, arguing that 20,000 police force earmarked for VIP security was inadequate pitched for increasing earmarked Delhi Police for VVIP security from 20,000 to 22, 500. [9]

Alok Kumar Verma said he will give the "utmost priority" to get government to sanction the increase in police deployment for VVIP duties. He is expected to play the Terror threat card to get the extra 2250 police personnel, citing Ministry of Home Affairs (MHA ), Intelligence Bureau, and Delhi police's special bureau threat assessments. The increase in Police strength for VVIP security will increase the deployment of police personnel per VIP from 17 to 19, and Police Deployment for VIP security from 25 percent to almost one third [28.8 percent] of its total strength.[9]

The demand for increasing Police strength for Securing Delhi's VIP, at considerable cost, is against the background of worsening law and order situation in the rest of the city, especially the more deprived areas of the city of some 19 million people. [9]

The Intelligence Bureau and the Ministry of Home Affairs (India) (MHA) are responsible for identifying and nominating person deserving police protection. The level of police protection is decided by the Home Minister and the home Secretary. There are four categories of protection or security cover: Z+, Z, Y, and X. Who will get what category of security cover is decided by Security Categorization Committee (SCC) — headed by the home secretary.[9][13]

Armed Police protection to those designated as deserving protection by MHA is provided by personnel drawn from central paramilitary forces under the home ministry such as the National Security Guard (NSG), CRPF, BSF, ITBP and Central Industrial Security Force (CISF). In 2006 the CISF was mandated to raise a Special Security Group (SSG) for VIP security. The SSG unit in CISF came into being on 17 November 2006. This unit is responsible physical protection of the highly threatened dignitaries/ individuals, evacuation of the Protected Persons and for providing static as well as mobile security to the Protected Persons".[14] :para 2.129

In addition to the MHA and the Intelligence Bureau, Delhi Police Commissioner is also authorized to extend police protection on the basis of reports by the Special Bureau of Delhi police.[13]

In 2012, during the tenure of the Congress(I) led government, Intelligence Bureau nominated 332 persons for protection; in 2016, under the BJP led NDA government, the number of people identified by Intelligence Bureau and MHA for police protection shot up to 454. A spokesperson of the MHA dismissed allegations that the list of persons given police protection is prepared arbitrarily. He said, "The number of protectees keeps changing depending on reports and inputs received from the security agencies. " Home Minister Rajnath Singh's predecessor Sushil Kumar Shinde, had explained that the persons nominated for protection "Only on the basis of recommendations from the Intelligence Bureau (IB)…We don’t do it on our own," The current list includes nine expelled Congress MLAs from Uttarakhand who revolted against Harish Rawat and joined the BJP on 18 May 2016 . It includes the name of BJP's Kisan Morcha chief Vijay Pal Singh Tomar, Umesh Kumar, a journalist, who carried out a sting on chief minister Rawat.[9][13]

Delhi Police has also launched the facility of registering Online FIR from February 2014.[19]

Over the years, Delhi Police has been involved in a series of controversies; ranging from custodial deaths, refusal to write First Information Report, inaction or collusion with arsonists during communal riots. At various times, Delhi Police has been found to be harsher on criminals which has caused it to get warnings from the Supreme Court of India and Central Bureau of Investigation.

Delhi Police has often been reported as one of the most corrupt police forces in the country, with the highest number of complaints in the Indian Police Services being registered against its personnel.[20][21][22]

A Delhi Police All Women PCR vehicle. The car pictured is a Toyota Innova. 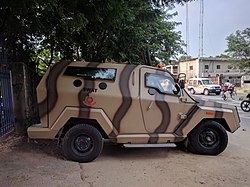 Were formed in 2009 in wake of 26/11,they saw action first in 2010 Commonwealth Games,they were tasked with protection duties. They are trained on the lines of National Security Guard. All the commandos are under 28 years of age thus, making them fit and capable of tasks, meant for commandos. Their main work is to fight against any terrorist attack if occurs in Delhi NCR. They have been trained exclusively in Krav Maga. Delhi was one of the first city to get an all women SWAT team.[26] SWAT team members will function under the elite Special Cell.[27] 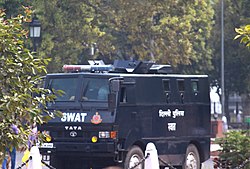