Before 1981, the security of the Prime Minister at their official residence was the responsibility of the Special Security District of the Delhi Police, under the command of a Deputy Commissioner of Police (DCP). In October 1981, a Special Task Force (STF) was established by the Intelligence Bureau (IB) to provide transportation security and road escorts for Prime Minister during travels in and out of New Delhi.

After the assassination of Prime Minister Indira Gandhi by two of her Delhi Police security personnel in October 1984, a review was undertaken by a Committee of Secretaries of the Ministry of Home Affairs. Given the breach, it was decided to entrust security of the Prime Minister to an exclusive unit under direct control of the STF to provide proximate security both in New Delhi and outside. These decisions were taken as short-term measures.

On 18 February 1985, the Ministry of Home Affairs set up the Birbal Nath Committee to examine the issue and submit recommendations for prime ministerial security. In March 1985, the Committee submitted its recommendation for the raising of a Special Protection Unit (SPU). On 30 March 1985, the President of India, by executive order, created 819 posts for the unit within the Cabinet Secretariat. The name of the unit was re-christened Special Protection Group, to be led by a Director who would be an Indian Police Service officer with the rank of Inspector General of Police.

S. Subramaniam, then Joint Director (VIP Security) in the Intelligence Bureau, assumed office as Director of the SPG.[9] Initially, the establishment of the SPG necessitated a special delineation of responsibility to various agencies concerned with the security of the Prime Minister. The Blue Book, the then-previous containing security guidelines for the protection of the Prime Minister, was amended to incorporate new proximate security protocols.

Under the new arrangements, on domestic visits, the Intelligence Bureau and concerned State Police were responsible for coordination, collection and dissemination of intelligence affecting the Prime Minister's security. State Police and the SPG would then provide physical security arrangements for the Prime Minister in two-layers. The SPG operated under the authority of its constituting executive order for three years without legislation, from April 1985 to June 1988. That year, the Rajiv Gandhi Government passed the Special Protection Group Act to codify the order's provisions.

At the time, the Act only permitted security for the Prime Minister and his immediate relatives. When Rajiv Gandhi left office in 1989, he ceased to receive protection as Leader of the Opposition. This occurred despite the significant threat profile following his Government's military intervention in the Sri Lankan Civil War. In May 1991, Gandhi was assassinated at a political rally in Tamil Nadu by a suicide bomber. After his assassination, the SPG Act was amended to provide security to former Prime Ministers and their immediate families for a period of 10 years from the date on which the former Prime Minister ceased to hold office.[5] Prior to the conclusion of this period, a security review would be conducted by the IB to determine a protectee's current threat profile and the need for any extensions (which would last five years). For this reason, Rajiv Gandhi's widow, Sonia Gandhi, and her two children continued to receive SPG protection for 28 years (until 2019) owing to her activity in politics as President of the Indian National Congress.

On 27 November 2019, the Parliament of India passed the Special Protection Group (Amendment Act), 2019 which reduced SPG cover only to the PM and his immediate family members residing with him at his official residence. Under the amended legislation, former Prime Ministers are eligible for an extension of their protection for up to five years after leaving office, subject to a threat assessment by the Intelligence Bureau.[10] The amendment was controversial, given that it would strip SPG protection from Sonia Gandhi, Rahul Gandhi and Priyanka Gandhi (despite their activity in politics as senior members of the opposition Indian National Congress), former Prime Minister Manmohan Singh as well as Heeraben and Jashodaben Modi, the mother and estranged wife, respectively, of incumbent Prime Minister Narendra Modi. Modi lives alone at his official residence, 7 Lok Kalyan Marg, in New Delhi.

The "general superintendence, direction and control" of the SPG is exercised by the Government of India.[4] The head of the force, the Director, formally serves as the Joint Secretary (Security) in the Cabinet Secretariat and is responsible for "the command and supervision" of the force.[4] The director of the SPG since its inception has been an officer of the Indian Police Service (IPS) and holds the rank of Director General of Police.[11]

The SPG does not directly recruit personnel, who are instead drawn from Central Armed Police Forces and Railway Protection Force. Personnel from these services may apply for deputation to the SPG and undergo a rigorous physical assessment, psychological profile and enhanced security screening. Deputation to the SPG usually lasts five-years, but may be extended by the Director. Officers of the SPG, responsible for leadership and senior coordination, are selected from the IPS. 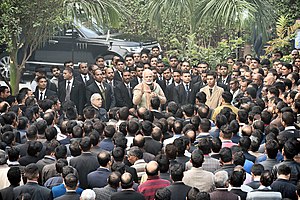 The Prime Minister greeting his SPG security detail and PMO officials. He is surrounded by SPG personnel with their uniforms of a western-style business suit and sunglasses.

During the winter and on international assignments, SPG personnel assigned to the Prime Minister's personal and residential details wear a Western-style formal business suit with dark sunglasses, a two-way encrypted communication earpiece and concealed handguns. During the summer, they wear a safari suit – amidst India's hot weather – with an untucked shirt to conceal their weapons and other equipment. Domestically, certain personnel providing close-quarters protection carry FN-Herstal P90 submachine guns and foldable ballistic shields in the form of briefcases (for immediate tactical responses). Previously, when the SPG protected dependents of former Prime Ministers, their personal security officers often wore plain clothes to blend into public environments.

On certain occasions, such as the Prime Minister's Independence Day Speech at the Red Fort and Republic Day Parade on Rajpath in New Delhi, SPG uniformed tactical personnel will wear gear over a black shirt and brown utility pants, with the word "POLICE" inscribed in reflective white on their bulletproof vests. Additionally, their personal equipment include FN-Herstal F2000 assault rifles, dark-visor goggles/sunglasses with inbuilt communication earpieces, bulletproof vests, gloves and elbow/knee pads.

Narendra Modi, the incumbent Prime Minister of India, is currently the only person under SPG protection. Sonia Gandhi and her children, Rahul Gandhi and Priyanka Gandhi, as well as her two children (Raihan and Miraya) were granted SPG protection for 28 years from 1991 to 2019. Two of their family members, former Prime Ministers Indira Gandhi and Rajiv Gandhi, were assassinated in 1984 and 1991, respectively, with the Government of India assessing a continued threat to their safety. On 8 November 2019, the Government of India withdrew their SPG security details and accorded them with Z+ Security. This decision followed the government's withdrawal of an SPG detail for Modi's predecessor, Manmohan Singh.

Additionally, under terms of the Special Protection Group (Amendment) Act, 2019, SPG security details for Modi's estranged wife, Jashodaben, and mother, Heeraben, were withdrawn that same year. The Act amended the SPG's legal mandate to protect the incumbent Prime Minister's "parents, wife and children" to "immediate family members residing (with the Prime Minister) at his official residence."[12]

These customized armoured variants of the standard 2015 BMW 760Li long-wheelbase sedan are used to transport the Prime Minister. They are certified with VR7 in the BRV 2009 ballistics protection ratings, and can defend occupants from anything between landmine blasts and machine-gun fire. Security upgrades include undercarriage armour, 76 mm (3 in) thick multi-layer laminated glass and armour plating on the doors, roof, body pillars, front footwell and rear bulkhead. They have run-flat tyres which can run deflated for kilometers. The cars are fitted with advanced heat sensors to ward off missiles and bombs. While the fuel tanks are Kevlar-sealed so as not to explode during an attack, their cabins also turn into gas-proof chambers and ensure fresh oxygen supply to secure the occupants in cases of chemical and biological attacks. Other rumoured[by whom?] features include an intercom system between the passengers and the driver, an alarm, a fire extinguisher with temperature sensor, irritant gas sensors (to warn of dangerous gasses in the passenger area), and a compartment for two machine guns in the center console. Due to the added weight of the security upgrades, suspension components such as the shock absorbers and strut tops are upgraded as compared to a normal 760Li.

These armoured variants of the standard wheelbase 2016 Range Rover Autobiography SUV are used as backup to the BMW 760Li sedans for transportation of the Prime Minister. If not being used by the Prime Minister himself/herself, they are used to transport members of the Prime Minister's immediate family accompanying him/her as part of the motorcade. These SUVs are armoured by Land Rover's Special Vehicle Operations facility in Coventry, England, and are certified with VR8 in the BRV 2009 ballistics protection ratings. They can withstand some of the most damaging and targeted of threats, including penetration by 7.62mm high velocity armour piercing incendiary bullets, they can protect occupants against up to 15 kg lateral Trinitrotoluene (TNT) blasts and defend against DM51 grenade explosions from both beneath the floor and above the sunroof. Run-flat tyres allow the vehicle to be driven even if the tyres are deflated. The chassis is reinforced with super-high-strength steel, and the standard glass has been replaced by multi-laminated armoured privacy glass of optical quality. The suspension is upgraded as compared to the standard Range Rover, while an anti-tamper exhaust, self-sealing fuel tank, auxiliary back-up battery and split-charging battery system provide added protection and security.

These SUVs carry the SPG Special Agents and Uniformed Officers assigned to the Prime Ministerial Security Detail. At least 8 BMW X5s, 6 Fortuners and 2 Land Cruisers accompany the motorcade at all times. The X5s in particular are armoured to VR6 in the BRV 2009 ratings, but the protection levels on the Toyota SUVs are undisclosed.

These are armoured tactical medical support vehicles to the Prime Minister, at least two of which are always spotted to the rear of the motorcade. They carry at least a litre of the Prime Minister's blood type, for emergency transfusions.

This vehicle is used to counter guided attacks, such as IEDs, Rocket Propelled Grenades, and Anti-Tank Guided Missiles. The antennas mounted on the roof are used in barrage jamming applications and for scouting purposes, the primary method used to counter IED threats. The antenna configuration can be changed according to threat level, for instance, taller antennas are used to increase the jamming protection distance, or change jamming frequency ranges. There are two dome-shaped EW Sensors. The EW sensors are millimetre-wave radars used to detect the launch of an RPG (Rocket Propelled Grenades) or laser range finder illumination and launch of an Anti-Tank Guided Missile (ATGM).

Members of the SPG are barred by the SPG Act from contact with the media or from publishing or collaborating in the publication of "any book, letter or other document" related to their work, including upon retirement from government service.[4] The SPG and its personnel are exempt from any information disclosure requests under the Right to Information Act, 2005.

Additionally, given Indira Gandhi's assassination by her Sikh security personnel (in response to her ordering of Operation Blue Star) and the continued presence of ethnoreligious political tensions in India, it is rumored that no Muslim or Sikh personnel are deputized to the SPG by virtue of their faith. These rumors have never been confirmed.