In 2018, Prasad was placed among the top twenty influential world leaders in digital technology and e-government, with his role in the Digital India programme and support for net neutrality.[3][4] His term as Union Minister was marked with the repeal of 1500 archaic laws, the landmark resolution of the Babri Masjid-Ram Janmabhoomi dispute, handling of litigation over the purchase of Rafale fighter planes, and digitisation of 15000 trial courts. On the other hand, his tenure also saw controversy over the proposed National Judicial Appointments Commission, constant friction between the judiciary and the executive, and rows with social media platforms Twitter and Facebook over local rules.[5][6]

He was born in a religious Chitraguptvanshi Kayastha family in Patna, Bihar.[7][8] His father Thakur Prasad was a senior advocate at the Patna High Court and one of the leading founders of the Jan Sangh, the predecessor of the Bharatiya Janata Party.[9] His sister Anuradha Prasad is the owner of BAG Films and Media Ltd, and the wife of Congress politician Rajeev Shukla.[10][8]

Prasad earned BA Hons, MA (Political Science) and LL.B degrees from Patna University.[9] He became a member of the Akhil Bharatiya Vidyarthi Parishad in 1969. Prasad participated in the student movement in Bihar led by Jayaprakash Narayan, and was imprisoned during the Emergency.[1][11]

Prasad appeared in the Ram Janmabhoomi Ayodhya dispute representing 'Ram Lalla', the deity, in the case. He defended Lal Krishna Advani in court when the latter was arrested in Bihar during his Rath Yatra in 1990. He was also the main lawyer arguing the PIL against former Bihar Chief Minister Lalu Prasad in the fodder scam that led to the jailing of several politicians and officials, including Lalu Prasad.[8][11]

Prasad began his political career as a student leader under the leadership of Jayaprakash Narayan in the 1970s, organising protests against Indira Gandhi's government.[9]

Entry into the Bharatiya Janata Party[edit]

In April 2000, Prasad was elected to the Rajya Sabha, the upper house of the Indian Parliament for the first time. Under Atal Bihari Vajpayee's premiership, Prasad served as Minister of State in the ministries of Coal (2001-2003), where he was responsible for accelerating the coal and mining reforms; Law and Justice (2002-2003); and Information and Broadcasting (2003-2004). As Minister of Information and Broadcasting, he introduced reforms in the radio, television and animation sectors which improved their quality and functioning.[2][9]

Prasad was appointed as a national spokesperson of the BJP in March 2006, and was later elevated to the post of its Chief National Spokesperson in 2007. In 2010, he became the party's general secretary.[2][9] 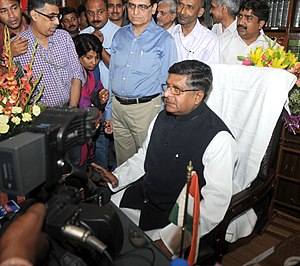 Ravi Shankar Prasad taking charge as the Union Minister for Law and Justice, in New Delhi on May 27, 2014.

Ravi Shankar Prasad taking charge as the Union Minister for Law and Justice, in New Delhi on June 03, 2019.

With the BJP-led National Democratic Alliance's victory in the 2014 general election,[13] Prasad rose to become part of the Narendra Modi Cabinet. He was appointed as Minister of Law and Justice and Minister for Communications and Information Technology on 27 May, 2014. He would go on to serve three terms as Law Minister: 27 May to 9 November, 2014; 5 July, 2016 to 25 May, 2019; and 30 May, 2019 to 7 July, 2021; a tenure of more than 5 years that was second only to that of Ashoke Sen.[5] Prasad was Minister of Communications and IT till the ministry's bifurcation on 5 July, 2016 into a Ministry of Communications and a Ministry of Electronics and Information Technology, following which he took charge of the latter. He was on the job till 25 May, 2019, and again from 30 May, 2019 to 7 July, 2021. During the latter period, he also held the Communications portfolio.[2]

One of Prasad's first acts after becoming Law Minister in 2014 was introducing legislation for the National Judicial Appointments Commission, which sought to reform the collegium system by which judges select candidates to be appointed as new judges. The collegium system had been criticised as opaque. The law was unanimously passed in Parliament and ratified by more than 20 states. However, in 2015, the Supreme Court of India struck it down, arguing that the Law Minister's presence in the Appointments Commission would cripple judicial independence.[5]

The following year, the Law Ministry stalled many judges' appointments by objecting to various names recommended by the Supreme Court collegium. Prasad defended the executive in this faceoff with the judiciary by rolling out statistics showing an increased number of judges being appointed in the year 2016.[5]

A successful conclusion of the Ayodhya dispute was achieved by a Supreme Court judgement in 2019, during Prasad's tenure as Law Minister.[5][14] The government also received a favourable judgement on the controversy over the purchase of Dassault Rafale fighter planes.[5]

On 22 August, 2017, the Supreme Court ruled the Muslim practice of instant divorce by uttering the word "talaq" thrice, called talaq-e-biddat or triple talaq, as "arbitrary and unconstitutional", violating women's right to equality, and not integral to Islam.[15] Following this landmark verdict, the NDA government tabled The Muslim Women (Protection of Rights on Marriage) Bill in the Lok Sabha in December 2017, seeking to introduce a 3-year jail term for offenders. The opposition criticised the bill for attempting to criminalise a civil wrong, with Law Minister Prasad countering the charges. While the original bill lapsed due to lack of support in the Rajya Sabha, it was passed by both Houses of Parliament on reintroduction in 2019, becoming an Act after receiving Presidential assent on 1 August, 2019. The passage of the bill despite the ruling NDA not having a majority in the Rajya Sabha was seen as a victory for Prasad and the government.[16][17][18]

As Minister for Electronics and Information Technology, Prasad spearheaded the NDA government's flagship Digital India programme.[3] Prasad himself has highlighted the common service centre scheme under Digital India, providing digital delivery of services and creating employment, as the biggest achievement of the government in the digital technology sector. He has also pointed out the establishment of business processing and outsourcing units (BPOs) in far-flung areas and the growth of electronic manufacturing units in India as successful government efforts.[19] The UK-based NGO Apolitical adjudged him as one of the top twenty leaders in the list of 100 most influential people in Digital Government in 2018.[3]

In October 2019, Prasad tried to defend the condition of the Indian economy by commenting that "the holiday of October 2 saw earning[s] of over Rs 120 crore by three movies – War, Joker and Sye Raa", indicating that "[t]he economy is sound". He also claimed that an NSSO report on unemployment was false. The comment came on the back of industrial output figures released by the government showing how factory output had shrunk by 1.1% in August, recording the poorest performance in seven years. The World Bank had also pointed out the country's widening current account deficit and predicted a further slowdown in economic growth. After coming under sharp criticism from the opposition Congress and CPIM, Prasad withdrew the comment, stating it had been taken out of context.[20][21]

Prasad has openly supported the cause of net neutrality, insisting that internet access "is not negotiable" and “walled gardens cannot be allowed”. As Minister for Communications and IT, Prasad had denied Facebook permission for its Free Basics platform in India in 2016, saying it provided access to only a host of websites and services, while excluding the broader internet from its purview.[22][4]

On 25 February, the Information Technology (Intermediary Guidelines and Digital Media Ethics Code) Rules, 2021 were notified,[23][24] seeking to regulate social media intermediaries and to tackle misuse of social media. However, Prasad and his Ministry were soon drawn into a bitter spat with Big Tech companies, especially Twitter, over the implementation of these local laws. The tussle escalated as the government removed Twitter's legal protection in India as an "intermediary" on June 16 over its failure to comply with the new IT rules,[25][26] while Twitter temporarily locked Prasad's official handle on its platform due to a copyright violation.[27]

On 3 February 1982, Prasad married Maya Shankar, who is a Historian and Professor of History at Patna University.[12][28]