The Department of Space (DoS) (ISO 15919: Antarikṣ Vibhāg or Antrikṣ Vibhāg) is an Indian government department responsible for administration of the Indian space program. It manages several agencies and institutes related to space exploration and space technologies. The Indian space program under the DoS aims to promote the development and application of space science and technology for the socio-economic benefit of the country. It includes two major satellite systems, INSAT for communication, television broadcasting and meteorological services, and Indian Remote Sensing Satellites (IRS) system for resources monitoring and management. It has also developed two satellite launch vehicles Polar Satellite Launch Vehicle (PSLV) and Geosynchronous Satellite Launch Vehicle (GSLV) to place IRS and INSAT class satellites in orbit.

In 1961, the Government of India and Prime Minister Jawaharlal Nehru entrusted the responsibility for space research and for the peaceful use of outer space to the Department of Atomic Energy (DAE), then under the leadership of Dr. Homi J. Bhabha. In 1962, the Department of Atomic Energy (DAE) set up Indian National Committee for Space Research (INCOSPAR), with Dr. Vikram Sarabhai as chairman, to organise a national space programme.

In 1969, INCOSPAR was reconstituted as an advisory body under the India National Science Academy (INSA) and the Indian Space Research Organisation (ISRO) was established. The Government of India constituted the Space Commission and established the Department of Space (DoS) in 1972 and brought ISRO under DoS management on 1 June 1972.

Kailasavadivoo Sivan is the current Secretary (Space) and ex-officio chairman of Indian Space Research Organisation and Space Commission. Vanditha Sharma is the additional secretary of the department.[3] 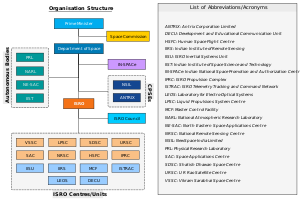 Organisation chart showing structure of the Department of Space.

Map of centres of the Department of Space of the Government of India.

The Department of Space manages the following agencies and institutes:[4]