The National Highways Development Project (NHDP) is a project to upgrade, rehabilitate and widen major highways in India to a higher standard. The project was started in 1998 under the leadership of Prime Minister, Atal Bihari Vajpayee. National Highways account for only about 2% of the total length of roads, but carry about 40% of the total traffic across the length and breadth of the country. This project is managed by the National Highways Authority of India (NHAI) under the Ministry of Road, Transport and Highways. The NHDP represents 49,260 km of roads and highways work and construction in order to boost economic development of the country. The government has planned to end the NHDP program in early 2018 and subsume the ongoing projects under a larger Bharatmala project. 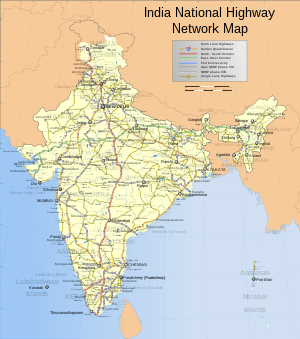 The Network of National Highways in India

The project is composed of the following phases:

"Financing of the National Highway Development Programme" (PDF). Archived from the original (PDF) on 28 February 2007.

National Highways Development Project is being implemented in all phases. The present phases are improving more than 49,260 km of arterial routes of NH network to international standards. The project-wise details of NHDP all phases is below as of 18 May 2021:

National Highway Development Project will close by first half of 2018, with the launch of Bharatmala project.[6] 10,000 km of highway construction left under NHDP will be merged with Phase I of the Bharatmala.[6] Sagarmala and Setu Bharatam are also expected to fill in the void created by closure of NHDP project.[citation needed]