The Indian Coast Guard (ICG) is a maritime law enforcement and search and rescue agency of India with jurisdiction over its territorial waters including its contiguous zone and exclusive economic zone. The Indian Coast Guard was formally established on 1 February 1977 by the Coast Guard Act, 1978 of the Parliament of India.[3] It operates under the Ministry of Defence.[7]

The establishment of the Indian Coast Guard was first proposed by the Indian Navy to provide non-military maritime services to the nation.[8] In the 1960s, sea-borne smuggling of goods was threatening India's domestic economy. The Indian Customs Department frequently called upon the Indian Navy for assistance with patrol and interception in the anti-smuggling effort.

The Nagchaudhuri Committee was constituted with participation from the Indian Navy and the Indian Air Force to study the problem. In August 1971, the committee identified the requirement to patrol India's vast coastline, set up a registry of offshore fishing vessels in order to identify illegal activity, and establish a capable and well-equipped force to intercept vessels engaged in illegal activities. The committee also looked at the number and nature of the equipment, infrastructure and personnel required to provide those services.[8]

By 1973, India had started a programme to acquire the equipment and started deputing personnel from the Indian Navy for these anti-smuggling and law enforcement tasks, under the provisions of the Maintenance of Internal Security Act. The Indian Navy sensed that the law enforcement nature of these duties diverged from its core mission as a military service. Admiral Sourendra Nath Kohli, then Chief of Naval Staff, hence made a recommendation to the Defence Secretary outlining the need for a separate maritime service to undertake those duties and offering the Navy's assistance in its establishment. On 31 August 1974, the Defence Secretary submitted a note to the Cabinet Secretary proposing cabinet action on Admiral Kohli's recommendation.

As a result, in September 1974, the Indian cabinet set up the Rustamji Committee, under the chairmanship of Khusro Faramurz Rustamji, with participation from the Navy, the Air Force and the Department of Revenue to examine gaps in security and law enforcement between the roles of the Indian Navy and the central and state police forces. The discovery of oil off Bombay High further emphasised the need for a maritime law enforcement and protection service. The committee submitted its recommendation for the establishment of the Indian Coast Guard under the Ministry of Defence on 31 July 1975. Bureaucratic wrangling followed, with the Cabinet Secretary making a recommendation to place the service under the Ministry of Home Affairs. Then Prime Minister Indira Gandhi overruled the Cabinet Secretary and decided to accept the original recommendation of the Rustamji Committee to place the service under the Ministry of Defence.[8]

An interim Indian Coast Guard came into being on 1 February 1977, equipped with two small corvettes and five patrol boats transferred from the Navy. The duties and functions of the service were formally defined in the Coast Guard Act, which was passed by India's parliament on 18 August 1978 and came into immediate effect.[3]

Vice Admiral V. A. Kamath of the Indian Navy was appointed the founding Director-General. Prime Minister Morarji Desai inspected the Guard of Honour at the service's inauguration. Vice Admiral Kamath proposed a five-year plan to develop the ICG into a potent force by 1984, but the full potential of this plan was not immediately realised due to an economic resource crunch.[8]

One of the historic operational successes of the ICG occurred in October 1999, with the recapture at high seas of a Panamanian-registered Japanese cargo ship, MV Alondra Rainbow, hijacked off Indonesia. Her crew were rescued off Phuket, Thailand. The ship had been repainted as MV Mega Rama, and was spotted off Kochi, heading towards Pakistan. She was chased by ICGS Tarabai and INS Prahar (K98) of the Indian Navy, and apprehended.[9] It was the first successful prosecution of armed pirates in over a century.

Indian Coast Guard ship and helicopter during the Search and Rescue Workshop and Exercise (SAREX), 2014

After the 2008 Mumbai attacks, the Indian government initiated a programme to expand the ICG force, assets and infrastructure.

The Indian Coast Guard's motto is "वयम रक्षामः" (Vayam Rakshamah), which translates from Sanskrit as "We Protect".

The Indian Coast Guard operates five regions. Each region is headed by an officer of the rank of Inspector-General. Each of the regions is further divided into multiple districts, typically covering a coastal state or a union territory.

There are currently 42 Coast Guard stations which have been established along the coastline of the country.[20]

A table showing the rank structure of Coast Guard officers with those of the other Indian armed services.[29] 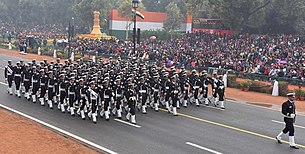 The Coast Guard Marching Contingent passes through the Rajpath, on the occasion of the 68th Republic Day Parade 2017

The command of ships at sea can only be exercised by officers of the General-Duty (GD) branch. The key functions of a General-Duty Officer would be to operate weapons, sensors and different kinds of equipment on board a ship. The safety of the ship and the men would be GD officers responsibility. All the District Commanders (COMDIS) and Commander of Coast Guard Region (COMCG) appointments are exercised by a GD Officer of the Indian Coast Guard.

Pilot Officers are also part of GD branch. A Pilot Officer gets an opportunity to work at shore Air Stations along the Indian coasts and also embark ships. ICG operates fixed wing aircraft for surveillance of the Exclusive Economic Zone. In addition, helicopters are embarked on Coast Guard Offshore Patrol Vessels (OPV) to provide local surveillance and perform search and rescue mission at sea.

Technical Officers are responsible for operation of advanced technology and sensor systems on board Coast Guard vessels and aircraft, as well as on shore installations. They also command the maintenance wings of the force.

Enrolled personnel in the Coast Guard serve as either a yantrik (technician) or navik (sailor).[31]

Future of the Indian Coast Guard[edit]

The following is a table of vessel classes which are either under construction or planned, but have not yet entered service.