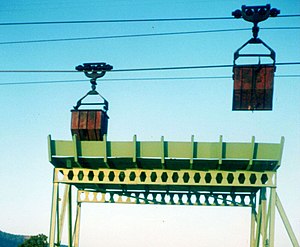 Telangana is one of the fastest growing states in India posing average annual growth rate of 13.90% over the last five years.[4] Telangana's nominal gross state domestic product for the year 2020-21 stands at ₹12.05 lakh crore (US$170 billion). Service sector is the largest contributor to the Telangana's economy with a share of about 65% in the year 2018-19. Growth in services has largely been fuelled by IT services with the State holding leading position in IT & ITeS in the country in terms of production and exports.[5]

Agriculture also form a backbone of Telangana's Economy. Two important rivers of India, the Godavari and Krishna, flow through the state, providing irrigation. Farmers in Telangana mainly depend on rain-fed water sources for irrigation. Rice is the major food crop. Other important local crops are cotton, sugar cane, mango and tobacco. Recently, crops used for vegetable oil production, such as sunflower and peanuts, have gained favour. There are many multi-state irrigation projects in development, including Godavari River Basin Irrigation Projects.

The state has also started to focus on the fields of information technology and biotechnology. There are 68 Special Economic Zones in the state.[6]

Telangana is a mineral-rich state, with coal reserves at Singareni Colleries.[7] 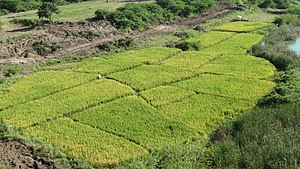 Rice is the major food crop and staple food of the state. Other important crops are tobacco, mango, cotton, and sugar cane. Agriculture has been the chief source of income for the state's economy. Important rivers of India, the Godavari, Krishna flow through the state, providing irrigation. Apart from major rivers, there are small rivers as Tunga Bhadra, Bima, Dindi, Kinnerasani, Manjeera, Manair, Penganga, Pranahitha, peddavagu and Taliperu. There are many multi-state irrigation projects in development, including Godavari River Basin Irrigation Projects and Nagarjuna Sagar Dam, the world's highest masonry dam.

Agri Export Zones for the following produce are proposed at the places mentioned against them:

Telangana is developing into a seed hub in India, and was selects as a certifying agency as per OECD standards, for 10 states. The state cultivated seeds in 2,251 acres and exported 17,000 quintals to countries like Sudan, Egypt, Philippines and in 2017-18, it expanded cultivation to 2,567 acre and was expecting yield of 26,000 quintals.[citation needed] 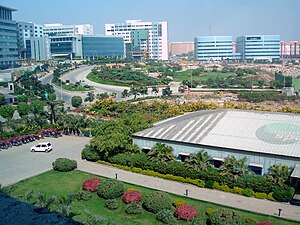 The Hyderabad Information Technology and Engineering Consultancy City or HITEC City is a major IT hub of Telangana
See also: Software industry in Telangana

In terms of services, Hyderabad is usually nicknamed as Cyberabad due to its information technology foray and location of major software industries in the city.[9][10] Prior to secession, it contributed 15% to India's and 98% to Andhra Pradesh's exports in IT and ITES sectors last 2013,[11] with Hyderabad as in the front line of Telangana's aims to promote information technology in India, the city boasts the HITEC City as its premier hub.

The state government is in the process of developing Industrial Parks at different places, for specific groups of industries. The existing parks are Software Park at Hyderabad, HITEC City for software units, Apparel Park at Gundlapochampalli, Export Promotion Park at Pashamylaram, Bio-technology park at Turkapally.[citation needed]