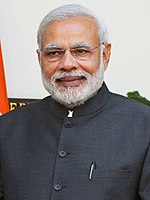 Narendra Damodar Das Modi is the current Prime Minister of India, since 26 May 2014.

Since the Independence of India, India has had fifteen prime ministers. The first was Jawaharlal Nehru of the Indian National Congress party.[1]

The current prime minister is Narendra Modi of Bharatiya Janta Party. He was sworn in on 30 May 2019.