From Bharatpedia, an open encyclopedia
Jump to navigation Jump to search
This article is about the city Udupi. For its namesake district, see Udupi district. For the parliamentary constituency, see Udupi (Lok Sabha constituency).

Udupi, otherwise spelt Udipi and also known as Odipu, is a city in the Indian state of Karnataka. Udupi is situated about 55 km (34 mi) north of the educational, commercial and industrial hub of Mangalore and about 422 km (262 mi) west of state capital Bangalore by road.

It is the administrative headquarters of Udupi District, and one of the fastest growing cities in Karnataka. Udupi is one of the top tourist attractions in Karnataka and has various educational institutions. It is notable for the Krishna Temple and is also known as the temple city.[3] It also lends its name to the popular Udupi cuisine, is also known as Lord Parashurama Kshetra, and is famous for Kanakana kindi. A centre of pilgrimage, Udupi is known as Rajata Peetha and Shivalli (Shivabelle).

The name Udupi is the stylized form of the city

In the 13th century, Vaishnavite saint Madhvacharya founded the Sri Krishna Temple.[4] He set up eight mathas - Ashta Mathas- In Kannada - ಅಷ್ಟ ಮಠಗಳು in Udupi to propagate the Dvaita Vedanta philosophy, and this caused a vibrant temple culture to take root in present-day Udupi district.[4] Significant migration of Brahmins to the region took place subsequently, and they came to comprise 10 per cent of the region's population, three times higher than elsewhere in South India.[4]

The city of Udupi is governed by the City Municipal Council and has 31 wards[11] spread across an area of 75.92 km2 (29.31 sq mi).[5] It is headed by Anand C Kallolikar, the Municipal Commissioner.[12][13] The city council has departments for health, urban planning, technical division, revenue, finance, birth and death, and Day-NULM.[14]

The masterplan of the city is prepared by the Udupi Urban Development Authority (UUDA)[15] and the Directorate of Town and Country Planning.[16]

The city receives its primary source of drinking water from water stored at Baje vented dam.[17] The municipality also seeks to augment its water storage by pumping water accumulated in the Swarna River at Sanebettu.[17][18] The city is divided into three zones with different timings for efficient water supply.[19] It also received a loan of $75 million from the Asian Development Bank to have all round the clock water supply in 2018.[20][21]

The city has both open and closed drains.[5] The underground sewage network exists in only 20% of the city's area as of 2017, but has been proposed to increase from the present 82 kilometres to 143 kilometres.[9] The municipality area generated 46 million litres (MLD) of sewage which is treated at a sewage treatment plant in Nittur.[22]

Udupi has an elevation of 27 m (89 ft) above mean sea level.[23] The climate in Udupi is hot in summers and pleasant in winter. During summers (from March to May) the temperature reaches up to 38 °C (100 °F) and in winters (from December to February) it is usually between 32 and 20 °C (90 and 68 °F). As it is a coastal area, there are a few beaches which are a tourist attraction. Kaup beach, Malpe beach are two of the beaches in Udupi.

The monsoon period is from June to September, with rainfall averaging more than 4,000 mm (160 in) every year and heavy winds. 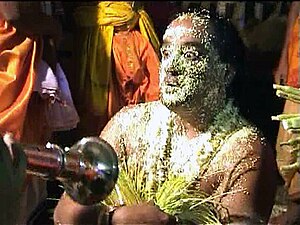 Rathabeedhi Geleyaru and Kalavrinda are local non-profit organisations, founded to encourage creative pursuits, especially those that keep alive the traditions of the region. Its primary focus has been historical dramas.

During Krishna Janmashtami, Pili Yesa, a traditional folk dance originated in Udupi is demonstrated on the streets. "Pili Yesa" translates to Tiger.

Masala dosa is a part of Udupi cuisine.

The term Udupi (also Udipi) is synonymous with vegetarian food now found all over the world.[citation needed] The origin of this cuisine is linked to Krishna Matha (Mutt). Lord Krishna is offered food of different varieties every day, and there are certain restrictions on ingredients during Chaturmasa (a four-month period during the monsoon season). These restrictions coupled with the requirement of variety led to innovation, especially in dishes incorporating seasonal and locally available materials.[24] This cuisine was developed by Shivalli Madhwa Brahmins who cooked food for Lord Krishna, and at Krishna Matha in Udupi, the food is provided free of cost. Restaurants specialised in Udupi cuisine can be seen widely in most metropolitan and large cities around the length and breadth of India.

Although popular for its vegetarian cuisine, Udupi has its fair share of non-vegetarian dishes that are similar to Mangalorean cuisine. Some of these include Kori Roti, Neer Dosa, Kori Pulimunchi, Chicken Sukka, Fish Curry, Fish Fry and more.

Udupi is becoming a major town in Karnataka. Udupi is the birthplace of the Syndicate Bank, Corporation Bank and Harsha Retail, the leading retailer of coastal Karnataka.[25][26] Udupi's economy also consists of agriculture and fishing. Small-scale industries like the cashew industry, and other food industries and milk cooperatives are the most prominent. Recently, Udupi is also making its mark in the real estate industry, greatly influenced by its neighboring spearhead Mangalore.

The Karnataka government had signed a memorandum of understanding (MoU) with the Cogentrix Light and Power Industry to set up a thermal power plant in the district at Nandikur. However, because of stiff opposition from citizens and environmentalist groups, the project has been temporarily suspended. An attempt by the Nagarjuna Power Corporation to set up a similar plant at nearby Padubidri also met strong opposition. Now, the power plant has been set up, generating 1,200 MW of power under the name of Udupi Power Corporation Limited (UPCL), a subsidiary of Lanco Infra, an Andhra Pradesh-based infrastructure major. Adani Power has taken over from Lanco Infra in 2014 for a sum of Rs 6,000 crores.[27] The opposition, however, continues.[28][29]

Manipal, a suburb of Udupi, is home to the headquarters of Syndicate Bank. It is renowned as an education and medical hub. Kasturba Medical College[30] and MIT (Manipal Institute of Technology)[31] are situated here.

Udupi has a local handloom sari industry. Made of pure cotton and lightweight, the sari has art silk design on its border and pallu besides butta of art silk dotting it. Hard work, low returns, and competition from power loom has led to a drop in the number of weavers of nearly 95% over three decades.[33] A geographical indication tag for Udupi sarees is under examination with the Geographical Indications Registry of India.[34] 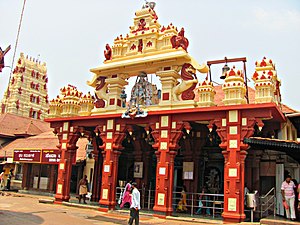 National Highways NH 66 and NH 169A pass through Udupi. Other significant roads include the State Highways to Karkala, Dharmastala and Sringeri. NH 66 provides a link to Mangalore and Karwar via Kundapur and NH 169A to Hebri, Agumbe, Thirthahalli and Shivamogga. Private as well as government buses connect Udupi to all parts of Karnataka. Udupi has a railway station on the Konkan Railway. The nearest International Airport to Udupi is Mangalore International Airport, which is approx. 58.5 km away.

City and suburban transport is available for travel within Udupi and its suburbs. The buses originate from the suburban bus stand (City Bus Stand). There are private bus operators as well as KSRTC city service buses.

The nearest harbor/ port to Udupi is Malpe, which is 5 km away, and Gangolli (Byndoor), which is 36 km away. The New Mangalore Port is 50 km away from Udupi.