Lala Lajpat Rai (28 January 1865 — 17 November 1928) was an Indian independence activist. He played a pivotal role in the Indian Independence movement. He was popularly known as Punjab Kesari. He was one of the three members of the Lal Bal Pal triumvirate.[1] He was also associated with activities of Punjab National Bank and Lakshmi Insurance Company in their early stages in 1894. He died a few weeks after sustaining severe injuries during a baton charge by police when he led a peaceful protest march against the all-British Simon Commission, a commission constituted by the United Kingdom for Indian constitutional reform.

Rai was born on 28 January 1866 in Agarwal Jain family [2][3][4][5][6] as a son of Urdu and Persian government school teacher Munshi Radha Krishna Agarwal and his wife Gulab Devi at Dhudike in Ludhiana district of Punjab Province.[7] He spent much of his youth in Jagraon. His house still stands tall in Jagraon and houses a library and museum.[8] He also built first educational institute R.K. high school in Jagraon.

In the late 1870s, his father was transferred to Rewari, where he had his initial education in Government Higher Secondary School, Rewari, Punjab province, where his father was posted as an Urdu teacher. In 1880, Lajpat Rai joined Government College at Lahore to study law, where he came in contact with patriots and future freedom fighters, such as Lala Hans Raj and Pandit Guru Dutt. While studying at Lahore he was influenced by the Hindu reformist movement of Swami Dayanand Saraswati, became a member of existing Arya Samaj Lahore (founded 1877) and founder-editor of Lahore-based Arya Gazette.[9][better source needed] 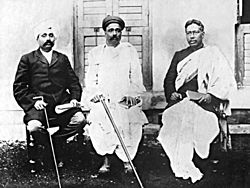 In 1884, his father was transferred to Rohtak and Rai came along after the completion of his studies at Lahore. In 1886, he moved to Hisar where his father was transferred, and started to practise law and became a founding member of the Bar council of Hisar along with Babu Churamani. In the same year he also founded the Hisar district branch of the Indian National Congress and reformist Arya Samaj with Babu Churamani (lawyer), three Tayal brothers (Chandu Lal Tayal, Hari Lal Tayal and Balmokand Tayal), Dr. Ramji Lal Hooda, Dr. Dhani Ram, Arya Samaj Pandit Murari Lal,[10] Seth Chhaju Ram Jat (founder of Jat School, Hisar) and Dev Raj Sandhir. In 1888 and again in 1889, he had the honor of being one of the four delegates from Hisar to attend the annual session of the Congress at Allahabad, along with Babu Churamani, Lala Chhabil Das and Seth Gauri Shankar. In 1892, he moved to Lahore to practise before the Lahore High Court. To shape the political policy of India to gain independence, he also practised journalism and was a regular contributor to several newspapers including The Tribune. In 1886, he helped Mahatma Hansraj establish the nationalistic Dayananda Anglo-Vedic School, Lahore

In 1914, he quit law practise to dedicate himself to the Indian independence movement and travelled to Britain, and then to the United States in 1917. In October 1917, he founded the Indian Home Rule League of America in New York. He stayed in the United States from 1917 to 1920. His early freedom struggle was impacted by Arya Samaj and communal representation.[11]

After joining the Indian National Congress and taking part in political agitation in Punjab, Lala Lajpat Rai was deported to Mandalay, but there was insufficient evidence to hold him for subversion. Lajpat Rai's supporters attempted to secure his election to the presidency of the party session at Surat in December 1907, but he did not succeed.

Graduates of the National College, which he founded inside the Bradlaugh Hall at Lahore as an alternative to British-style institutions, included Bhagat Singh.[12] He was elected President of the Indian National Congress in the Calcutta Special Session of 1920.[13] In 1921, he founded Servants of the People Society, a non-profit welfare organisation, in Lahore, which shifted its base to Delhi after partition, and has branches in many parts of India.[14] According to him, Hindu society needs to fight its own battle with caste system, position of women and untouchability.[15] Vedas were an important part of Hindu religion but the lower caste were not allowed to read them. Lala Lajpat Rai approved that the lower caste should be allowed to read them and recite the mantras. He believed that everyone should be allowed to read and learn from the Vedas.[16]

Travel to the United States[edit]

A banquet given in honour of Lala Lajpat Rai by the California Chapter of the Hindustan Association of America at Hotel Shattuck in Berkeley on 12 February 1916.

Lajpat Rai travelled to the United States in 1917, and then returned during World War I. He toured Sikh communities along the Western Seaboard, visited the Tuskegee University in Alabama, and met with workers in the Philippines. His travelogue, The United States of America (1916), details these travels and features extensive quotations from leading African American intellectuals, including W.E.B. Du Bois and Fredrick Douglass. While in the United States he had founded the Indian Home Rule League in New York City and a monthly journal, the Young India and Hindustan Information Services Association. Rai petitioned the United States House Committee on Foreign Affairs, painting a vivid picture of maladministration by the British Raj in India, the aspirations of Indian public for independence amongst many other points which strongly sought the support of the international community for the attainment of Indian independence. The 32-page petition, which was prepared overnight, was discussed in the U.S. Senate in October 1917.[17] The book also argues for the notion of "color-caste," suggesting sociological similarities between race in the US and caste in India. During World War I, Lajpat Rai lived in the United States, but he returned to India in 1919 and in the following year led the special session of the Congress Party that launched the non-co-operation movement. He was imprisoned from 1921 to 1923 and elected to the legislative assembly on his release.[17]

Protests against the Simon Commission[edit] 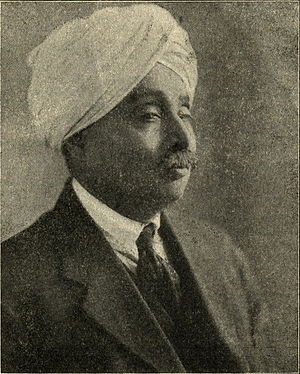 Photo of Rai printed in the February 1920 issue of Young India.

In 1928, the United Kingdom set up the Simon Commission, headed by Sir John Simon to report on the political situation in India. The commission was boycotted by Indian political parties because it did not include any Indian members, and it was met with country-wide protests.[18] When the Commission visited Lahore on 30 October 1928, Lajpat Rai led a non-violent march in protest against it and gave a slogan "Simon Go Back". The protesters chanted the slogan and carried black flags.

The police superintendent in Lahore, James A. Scott, ordered the police to lathi charge the protesters and personally assaulted Rai.[19] Despite being severely injured, Rai subsequently addressed the crowd and said "I declare that the blows struck at me today will be the last nails in the coffin of British rule in India".[20]

Rai did not fully recover from his injuries and died on 17 November 1928. Doctors thought that Scott's blows had hastened his death.[19] However, when the matter was raised in the British Parliament, the British government denied any role in Rai's death.[21] Bhagat Singh, an HSRA revolutionary who was a witness to the event,[22] swore to avenge the death of Rai, who was a significant leader of the Indian independence movement.[21] He joined other revolutionaries, Shivaram Rajguru, Sukhdev Thapar and Chandrashekhar Azad, in a plot to kill Scott to send a message to the British government.[23] However, in a case of mistaken identity, Bhagat Singh was signalled to shoot on the appearance of John P. Saunders, an assistant superintendent of the Lahore police. He was shot by Rajguru and Bhagat Singh while leaving the District Police Headquarters in Lahore on 17 December 1928.[24] Chanan Singh, a Head Constable who was chasing them, was fatally injured by Azad's covering fire.[25]

This case did not stop Bhagat Singh and his fellow-members of the Hindustan Socialist Republican Association from claiming that retribution had been exacted.[23]

The statue of Rai at Shimla, Himachal Pradesh.

Lajpat Rai was a heavyweight veteran leader of the Indian Nationalist Movement, Indian independence movement led by the Indian National Congress, Hindu Mahasabha, Hindu reform movements and Arya Samaj, who inspired young men of his generation and kindled latent spirit of patriotism in their hearts with journalistic writings and lead-by-example activism. Young men in the independence movement, such as Chandrasekhar Azad and Bhagat Singh, were inspired by Rai.

In late 19th and early 20th century Lala Lajpat Rai himself was founder of many organisations, including Arya Gazaette are Lahore, Hisar congress, Hisar Arya Samaj, Hisar Bar Council, national DAV managing Committee. Lala Lajpat Rai was also head of the "Lakshmi Insurance Company," and commissioned the Lakshmi Building in Karachi, which still bears a plaque in remembrance of him. Lakhsmi Insurance Company was merged with Life Insurance Corporation of India when en masse nationalisation of Life Insurance business happened during 1956.

In 1927, Lajpat Rai established a trust in his mother's memory to build and run a tuberculosis hospital for women, reportedly at the location where his mother, Gulab Devi, had died of tuberculosis in Lahore.[26] This became known as the Gulab Devi Chest Hospital and opened on 17 July 1934. Now the Gulab Devi Memorial hospital is one of the biggest hospital of present Pakistan which services over 2000 patients at a time as its patients.

Monuments and institutes founded in memory of Lala Lajpat Rai[edit]

Erected in the early 20th century, a statue of Lajpat Rai at Lahore, was later moved central square in Shimla after the partition of India. In 1959, the Lala Lajpat Rai trust was formed on the eve of his Centenary Birth Celebration by a group of Punjabi philanthropists (including R.P Gupta and B.M Grover) who have settled and prospered in the Indian State of Maharashtra, which runs the Lala Lajpatrai College of Commerce and Economics in Mumbai. Lala Lajpat Rai Memorial Medical College, Meerut is named after him.[27] In 1998, Lala Lajpat Rai Institute of Engineering and Technology, Moga was named after him. In 2010, the Government of Haryana set up the Lala Lajpat Rai University of Veterinary & Animal Sciences in Hisar in his memory.

Homi Master directed a 1929 Indian silent film, titled Punjab Kesari (or The Lion of Punjab), about Lala Lajpat Rai.[29] Vande Mataram Ashram a 1927 silent film by the Indian filmmaker Bhalji Pendharkar, was inspired by Rai's and Madan Mohan Malaviya's opposition to the Western-style educational system introduced by the British Raj; it was censored by the colonial government's regional film censorship board.[30]

A documentary film about Lajpat Rai, directed by K. Viswanath, was produced by the Government of India's Films Division.[31]

Along with founding Arya Gazette as its editor, he regularly contributed to several major Hindi, Punjabi, English and Urdu newspapers and magazines. He also authored the following published books.

He also wrote biographies of Mazzini, Garibaldi, Shivaji, and Shrikrishna.