Bachendri Pal (born 24 May 1954) is an Indian mountaineer, who in 1984[3][4] became the first Indian woman to reach the summit of Mount Everest.[3] She was awarded the third highest civilian award Padma Bhushan by Government of India in 2019.[5]

Bachendri Pal was born to a Bhotiya family on 24 May 1954 in Nakuri village, in the Uttarkashi district in the Indian state of Uttarakhand. She was one of five children to Hansa Devi, and Shri Kishan Singh Pal, – a border tradesman who supplied groceries from India to Tibet. She was born only five days prior to the first anniversary of the original ascension of Mount Everest by Tenzing Norgay and Edmund Hillary. She completed her M.A. and B.Ed. from D.A.V. Post Graduate College, Dehradun. She started mountaineering at the age of 12 when, along with her friends, she scaled a 13,123 ft (3,999.9 m) high peak during a school picnic. On the invitation of her school principal, she was sent to college for higher studies and, during her course at Nehru Institute of Mountaineering, became the first female to climb Mt. Gangotri 23,419 ft (7,138.1 m) and Mt. Rudragaria 19,091 ft (5,818.9 m) in 1982. In that time, she became an instructor at the National Adventure Foundation (NAF), which had set up an adventure school for training women to learn mountaineering.[1]

Pal encountered stiff opposition from her family and relatives when she chose a career as a professional mountaineer rather than a schoolteacher. However, she soon found success in her chosen field when, after summitting a number of smaller peaks, she was selected to join India's first mixed-gender team to attempt an expedition to Mount Everest in 1984.[3]

In 1984, India scheduled its fourth expedition to Mount Everest, christened "Everest '84". Bachendri Pal was selected as one of the members of the group of seven women and eleven men to attempt the ascent of Mount Everest (Sagarmatha in Nepalese). The team was flown to Kathmandu, the capital of Nepal, in March 1984, and from there the team moved onwards. Recalling her first glimpse of Mount Everest, Bachendri reminisced, "We, the hill people, have always worshipped the mountains... my overpowering emotion at this awe-inspiring spectacle was, therefore, devotional."[6] The team commenced its ascent in May 1984. Her team almost met disaster when an avalanche buried its camp, and more than half the group abandoned the attempt because of injury or fatigue. Bachendri Pal and the remainder of the team pressed on to reach the summit.[3] Bachendri Pal recalled, "I was sleeping in one of the tents with my teammates at Camp III at an altitude of 24,000 ft (7,315.2 m). On the night of 15–16 May 1984, at around 00:30 hours IST, I was jolted awake; something had hit me hard; I also heard a deafening sound and soon after I found myself being enveloped within a very cold mass of material."[6]

Bachendri Pal continued to be active after ascending the highest peak in the world. She successfully led:

Bachendri Pal, along with Premlata Agarwal and a group of ace climbers including Mt. Everest summiteers, arrived in Uttarkashi and carried out relief and rescue operations in the remotest high altitude villages of the Himalayas that had been ravaged in the 2013 North India floods.[10] 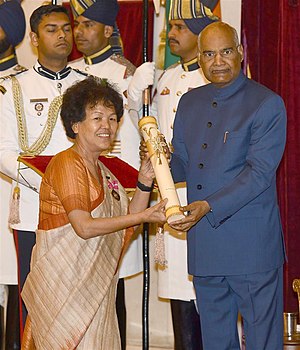 Bachendri Pal has been conferred with following awards and accolades:[8][11]