Rudrapatna Krishnashastri Srikantan (14 January 1920 – 17 February 2014), known as R. K. Srikantan, was a vocalist of the Carnatic musical tradition of South Indian music. He was awarded the Madras Music Academy's Sangeetha Kalanidhi in 1995.

Srikantan was born to a Sankethi Brahmin family in Rudrapatna,[1][2] Hassan district of Karnataka, on Makara Sankranti day, 14 January 1920. His father R Krishnashastri was an orator, singer of Gamaka (storytelling), playwright, poet, and a harikatha vidwan. His grandfather, Narayanaswamy of Bettadapura, also known as Veena Narayanaswamy was a Veena instrumentalist and a contemporary of Veene Sheshanna and Veene Subbanna.[3] 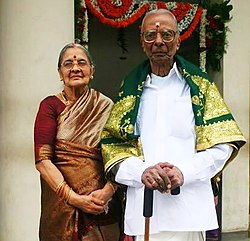 Srikantan with his wife, Maithreyi

Srikantan went to Sadvidya Pathashala and Banumaiah High School in Mysore. Later, he obtained his BA degree from the Maharaja College, Mysore.[citation needed]

His father Krishnashastri was Srikantan's first tutor and he moved to Mysore after his wife's death. Later, Srikantan was mentored by his brother R. K. Venkatarama Shastri. He also received training from veteran musicians like Veene Subbanna and Chowdiah[3]

Srikantan was an avid attendee at all concerts in Mysore during the era of the Wodeyars. Srikantan during those days was highly influenced by the Nadaswaram vidwans of his time. He was also highly influenced by maestros of the likes of Semmangudi Srinivasa Iyer, Ariyakudi Ramanuja Iyengar, Musiri Subramania Iyer, G N Balasubramaniam and Maharajapuram Viswanatha Iyer.

Among the award received by Srikantan are: