Chikmagalur, known officially as Chikkamagaluru, is a city and the headquarters of Chikmagalur district in the Indian state of Karnataka. Located on the foothills of the Mullayanagiri peak of the Western Ghats, the city attracts tourists from around the state for its pleasant and favourable hill station climate, tropical rainforest and coffee estates.

Chikmagalur takes its name from the Kannada Chikkamagaḷa ūru that translates to "younger daughter's town". It is said to have been given as a dowry to the youngest daughter of Rukmangada, the legendary chief of Sakharayapattana.[citation needed] 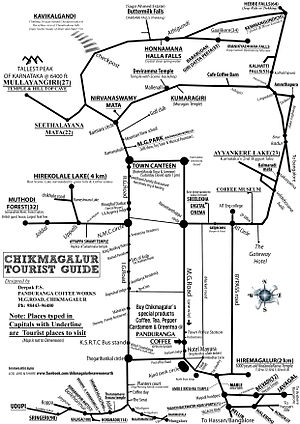 Chikmagalur is situated in the Malenadu region of Karnataka in the Deccan plateau in the foothills of the Western Ghats. It is situated at an elevation of 1,090 metres (3,580 ft) above mean sea level. The Yagachi River has its source near the town and flows in the south-easterly direction before uniting with the Hemavati river. Chikmagalur generally has a moderate to cool climate. The temperature of the city varies from 11-20 °C during winter to 25-32 °C during summer.