The economy of Madhya Pradesh refers to the economic growth and case of the Indian state of Madhya Pradesh. It grew 12% in GDP for the year of 2011–12, for which it received an award from then President Pranab Mukherjee in January 2013 for improving its tourism, medical and infrastructural growth.

The following is a table showing the trend of the gross state domestic product of Madhya Pradesh at market prices estimated by Ministry of Statistics and Programme Implementation with figures in the millions of Indian Rupees.

This is a chart of the output of major commodities of Madhya Pradesh.

Until 2005, there was only one S&P CNX 500 conglomerate with its corporate office in Madhya Pradesh viz. Ruchi Soya Industries (2005 gross income Rs 49,661 million). Now there are many big industries based in the state. State-run NTPC will invest about Rs 20,000 crore to set up a 3,960-megawatt (Mw) coal-based power project in Madhya Pradesh and has signed a memorandum of understanding with the state government and MP Power Trading Company regarding this[7]

Madhya Pradesh has 6 Ordnance Factories, four of which are located in Jabalpur (Vehicle Factory, Grey Iron Foundry, Gun Carriage Factory, Ordnance Factory Khamaria) and one each in Katni and Itarsi. The factories are run by the Ordnance Factories Board and manufacture a variety of products for the Indian Armed Forces.

MFP from the forests, such as Tendu leaves used to roll bidis, sal seed, teak seed, and lak are a major contributor to the rural economy of the state. MFP-PARC (Minor Forest Produce - Processing & Research Centre) is located in the state capital - Bhopal. MFP-PARC is a unit of MP Minor Forest Produce (Trading & Development) Co-operative Federation Limited.[8]"Vindhya Herbals" is the brand of various ayurvedic, herbal & fruit products produced by MP MFP Federation. Apart from MFP-PARC, these products are also produced in Rehti (Sehore district), Barman (Narsinghpur district), Katni, Panna & Dewas in Madhya Pradesh. Some more processing centers are in the pipeline. 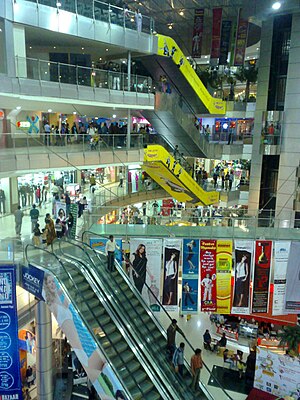 Indore is the commercial capital of Madhya Pradesh with a bulk of its trade coming from large, medium, and small scale manufacturing and service industries. These industries range from automobile to pharmaceutical, from software to retail, and from textile trading to real estate. Major industrial areas surrounding the city include the Pithampur Special Economic Zone and the Sanwer Industrial belt. While textile manufacturing and trading are the oldest contributors to the economy, real estate has emerged very fast in past few years. National real estate players including DLF Limited, Omaxe, Sahara, Parsvnath, Ansal API[9] and Emaar MGF have already launched their residential projects in Indore. These projects are generally on the Indore bypass. This road also houses the projects of many local and regional real estate players like Silver spring, Kalindi, Milan Heights, etc. Major software firms in Indore include Worldpay, Impetus, IBM India[24], and Computer Sciences Corporation. Also, many small and medium-size software development firms are also established. In the software front, a major event occurred in the first half of 2011 when India's biggest software company Tata Consultancy Services decided to open a campus in Indore. The Government of MP has also done the land allotment. Infosys, the country’s second-largest information technology services company, plans to set up a new development centre in Indore at an investment of Rs 100 crore in phase one. Pithampur near Indore houses production plants of various pharmaceutical companies like Ipca Laboratories, Cipla, Lupin, Glenmark, and Unichem.

Bhopal is the capital and the second-largest city in the state both in terms of population and in terms of area. Initially its economic growth stalled because of the Bhopal Gas Tragedy but has now started growing again.[10] Its economy is mainly based on industries. It is an important industrial center of the state. Electrical goods, cotton, chemicals, and flour milling are the main source of economy. Zardozi and embroidery of Bhopal's old city is also famous. The district is highly urbanised with nearly 80% of the population marked as urban. Now being a metropolitan city, many Software/IT sector companies are setting up offices in the city. Bhopal is also an important tourist place with the following destinations near the city:[11]

Gwalior enjoys being at a very strategic position as being the main junction on New Delhi - Chennai railroad and being on NH-3 and NH-75. Gwalior is surrounded by 3 Industrial areas - Sitholi, Banmore and Malanpur. All these three sectors are on NH 75, National Highway 3 and NH 92 respectively. Malanpur is the biggest. The city earlier had big manufacturing industries such as Gwalior Grasim and J.C. MILLS of Birlanagar but now this sector is left with only one industry – J.B.Mangharam Ltd. But the other three sectors have many industries. The important ones are dairy, chemical, manufacturing, and textiles. Handicraft and small industries are also found such as Gwalior potteries. Gwalior is also an important historical and tourism sector of the country therefore the tourism sector also puts an effect into the city's economy. Gwalior trade fair is an annual trade fair showcasing the economy of Gwalior. GDP ($US) : 15 billion

The Narmada river bringing in freshwater from the Vindyachal Ranges has developed Jabalpur district into an agrarian economy. The land of the Narmada basin with its fertile alluvial soil gives good yields of sorghum, wheat, rice, and millet in the villages around Jabalpur. Important among commercial crops are pulses, oilseeds, cotton, sugar cane, and medicinal crops. The state is poised for a breakthrough in soybean cultivation. In Kharif crops occupy 60% and Rabi crops 40% area with 71.4% area under food grain production. Nearly 59% of landholders are marginal whereas small farmed share 18% of farmland. Low literacy rates (35.45%), undulating topography, high percentages of wasteland (13.2%), underdeveloped irrigation potential (23%), low groundwater utilization, a large proportion of rain-fed agriculture (75%), the practice of Kharif fallows (3.6%), low cropping intensity (131%), low fertilizer consumption (50 kg/ha), a high proportion of low-value crops, and high numbers of unproductive livestock constrain production in the state.

Jabalpur has a variety of industries largely based in mineral substances of economic value found in the district, although the ready-made garments industry is a substantial portion of production in Jabalpur.

Armed forces make up a large portion of the city and economy in this city. The city has three regimental centres: Grenadiers, Jammu and Kashmir rifles and the Signals regiment. Jabalpur is also the army headquarters of Madhya Pradesh, Bihar, Chhattisgarh, and Orissa. Jabalpur is an important divisional headquarters, having eight districts: Jabalpur, Seoni, Mandla, Chhindwara, Narsimhapur, Katni, Dindori, Balaghat. The Jabalpur District has been reconstituted on May 25, 1998. It now has four tehsils Jabalpur, Sihora, Patan, and Kundam. Jabalpur also has the headquarters of the Madhya Pradesh State Electricity Board, Homeguards, and many other state and central government offices. There are seven blocks in the district with 1449 inhabited villages, 60 uninhabited, 1209 revenue villages, and 4 forest villages. The presence of several industries in Jabalpur bolstered the industrial scenario of the city. However, the industrial growth of the area owes much to the defense establishments and the four ordnance factories.

The presence of the military base and the ordnance factories have improved the infrastructure of the city. This has boosted the industrial development of Jabalpur. The important industries in Jabalpur are:

An ancient city situated on the eastern bank of the Kshipra River, Ujjain was the most prominent city on the Malwa plateau of central India for much of its history. It emerged as the political centre of central India around 600 BCE. It was the capital of the ancient Avanti kingdom, one of the sixteen mahajanapadas. It remained an important political, commercial and cultural centre of central India until the early 19th century when the British administrators decided to develop Indore as an alternative to it. Ujjain continues to be an important place of pilgrimage for Shaivites, Vaishnavites and followers of Shakta.[13]

Ujjain has been selected as one of the hundred Indian cities to be developed as a smart city under PM Narendra Modi's flagship Smart Cities Mission.[14] GDP ($US) : 6.9 billion

In recent years, the modern industry has taken off in Dewas in a big way. The growth is the industry sector has given jobs to local factories. At the same time, traditional crafts / Handicrafts as Mojri (Shoes), Synthetic Carpets, leather works (begs, belts, ladies' purses, shoes, coats, briefcases, etc.) remain important in the economy. Agriculture (especially Soybean, wheat, gram) is also the source of the economy. Many high tech industries have been set up for oil extraction from Soyabean. To control the Indian economy, BANK NOTE PRESS, a Central Government Organization for the printing of Indian Currency is also situated here. GDP ($US) : 5.4 billion

The city of Ratlam located in the northwestern part of the state of Madhya Pradesh for long has been known for its economic and commercial activities. The region which was once famous for its opium and tobacco trade has grown in its size and proportion. With agricultural background in this city this is one of the most productive regions of the state. In the last two decades many small and medium-sized Agro-based industries has made appearances on the canvas of Ratlam. These industries have acted as a generator of employment transforming the lives of peoples in Ratlam. The city is also home to many chemical factories namely IPCA, JVL, Hightech, Shaba Chemicals, Bordiya Chemicals, Sujjan Chemicals, etc. GDP ($US) : 4.1 billion

Rewa district is particularly rich in mineral resources as a large variety of important minerals are found here. Limestone, Sandstone, industrial minerals like phosphate, asbestos, calcite, Talc (soapstone) are the major driving resources behind the industries based in the city. As for the composition of industries is concerned, then large scale industries make up only 7 to 8 units among thousands of industries spread across the district. USD ($US) : 5.3 billion

Agriculture forms the backbone of the Sagar economy. Many districts completely rely on the income generated from agriculture taken up in the city. The farmers use the latest technologies pertaining to the sector of agriculture so that a healthy crop is obtained. A strong agriculture economy has led to an improvement in the living standards of people living in the city of Sagar. The chief crops grown here are chickpeas, wheat, oilseeds, and soghum. Sagar is also into poultry farming, animal husbandry, dairy farming, fisheries, forestry, and cattle fairs. With many proposed large and small scale industries, the economy of Sagar is bound to grow at a fast pace. It is also a major hub for useful minerals. The stainless steel complex is also in Sagar. The lakha banjara lake in the centre of the city provides a wonderful panorama. Dr. Hari Singh Gour central university First and one of the oldest universities of Madhya Pradesh established in 1946 is in Sagar. Due to its scenic beauty and proximity to Khajuraho tourism also contributes to strengthening its economy. In Madhya Pradesh, Sagar is the sixteenth largest district in size. These small scale industries mainly manufacture steel utensils, detergent cake, and powder, agricultural equipment, welding electrodes, plastic goods, alum, caustic soda, solvent plant, granitbillie stone, pipes, acrylic sheets, PVC cable, acrylic products, incense sticks, all-purpose flour, etc. Bidi (A traditional Tobacco used in India) making is one of the most traditional and eminent businesses in Sagar and is done almost all over Sagar..... GDP ($US) : 1.1 billion