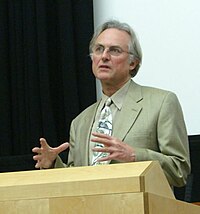 Richard Dawkins, a supporter of atheism, as well as the author of the well-known book The God Delusion

Atheism is rejecting the belief in a god or gods.[1][2] It is the opposite of theism, which is the belief that at least one god exists. A person who rejects belief in gods is called an atheist. Theism is the belief in one or more gods. Adding an a, meaning "without", before the word theism results in atheism, or literally, "without theism".

Atheism is not the same as agnosticism: agnostics say that there is no way to know whether gods exist or not.[3] Being an agnostic does not have to mean a person rejects or believes in god. Some agnostics are theists, believing in god. The theologian Kierkegaard is an example. Other agnostics are atheists. Gnosticism refers to a claim of knowledge. A gnostic has sufficient knowledge to make a claim. Adding an a, meaning "without", before the word gnostic results in agnostic, or literally, "without knowledge".

While theism refers to belief in one or more gods, gnosticism refers to knowledge. In practice, most people simply identify as a theist, atheist, or agnostic.

Anaxagoras was the first known atheist.[4] He was an Ionian Greek, born in Clazomenae in what is now Asia Minor. He travelled to other Greek cities, and his ideas were well known in Athens. Socrates mentioned that his works could be bought in Athens for a drachma.[4] Eventually he was prosecuted and condemned for impiety, and banished from Athens.

Anaxagoras' beliefs were interesting. He thought the Sun was not a god, and was not animated (alive). The Sun was "a red-hot mass many times larger than the Peloponnese". The Moon was a solid body with geographical features, and made of the same substance as the Earth. The world was a globe (spherical).[5][6][7]

Some atheists do not believe in any god because they feel that there is no evidence for any god nor gods and goddesses, so believing any type of theism means believing unproved assumptions. These atheists think a simpler explanation for everything is methodological naturalism which means that only natural things exist. Occam's razor shows simple explanations without many unproved guesses are more likely to be true.[8]

The Greek word αθεοι (atheoi), as it appears in the Epistle to the Ephesians (2:12) on the early 3rd-century Papyrus 46. It is usually written in English as "[those who are] without God".[9]

The word "atheism" comes from the Greek language. It can be divided into a- (ἄ), a Greek prefix meaning "without", and theos (θεός), meaning "god", and recombined to form "without gods"[10] or "godless". In Ancient Greece it also meant "impious".

Starting in about the 5th century BC, the word came to describe people who were "severing relations with the gods" or "denying the gods". Before then, the meaning had been closer to "impious". There is also the abstract noun, ἀθεότης (atheotēs), "atheism".

Cicero transliterated the Greek word into the Latin atheos. This word was often used in the debate between early Christians and Hellenists. Each side used it to label the other, in a bad way.[11]

Karen Armstrong writes that "During the sixteenth and seventeenth centuries, the word 'atheist' was still reserved exclusively for polemic ... The term 'atheist' was an insult. Nobody would have dreamed of calling himself an atheist."[12] Atheism was first used to describe an openly positive belief in late 18th-century Europe, meaning disbelief in the monotheistic Abrahamic god.[13] The 20th century saw the term expand to refer to disbelief in all deities. However, it is still common in Western society to describe atheism as simply "disbelief in God".[14]

Map of irreligious population by percentage in the world. Some countries, such as Brazil, Mexico and Chile, do not have categories for atheism, agnosticism and humanism in the census box. Also, in some countries atheism is unlawful or not acceptable. Because of this large numbers of atheists may be hidden in some places.

In many places, it is (or was) a crime to make public the idea of atheism. Examples would be to claim the Bible or Qur'an could not be true, or to speak or write that there is no god.[15]

Muslim apostasy, that is becoming an atheist or believing in a god other than Allah, may be a dangerous act in places with many conservative Muslim people. Many religious courts have punished and some still punish this act with the death penalty. Many countries still have laws against atheism.[16][17][18] Although it is considered by most Muslim scholars to be a sin, not all agree, that is should be punishable. For example, "Surat Al Kafirun" in Qur'an is clearly stating everyone's freedom to choose his religion and beliefs. The laws against Athiesm in the Muslim World is not universal, and is based on each society's interpretation of the Holy Book.

Atheism is becoming more common,[19] mainly in South America, North America, Oceania and Europe (by percentage of people that had a religion before and started to be atheist).

In many countries, mainly in the Western world, there are laws that protect atheists' right to express their atheistic belief (freedom of speech). This means that atheists have the same rights under the law as everyone else. Freedom of religion in international law and treaties includes the freedom to not have a religion.

Today, about 2.3% of the world's population describes itself as atheist. About 11.9% is described as nontheist.[20] Between 64% and 65% of Japanese describe themselves as atheists, agnostics, or non-believers,[21][22] and up to 48% in Russia.[21] The percentage of such people in European Union member states ranges between 6% (Italy) and 85% (Sweden).[21] In the United States, according to Pew and Gallup—two of the most reputable polling firms in America—both conclude that about 10% of Americans say they do not believe in God, and this figure has been slowly creeping up over the decades. The real number is likely higher than this, due to the stigma around atheism.[23]

People disagree about what atheism means. They disagree on when to call certain people atheists or not.

Atheism is generally described as not believing in God.

In 1979 George H. Smith said that: "The man who is unacquainted with theism is an atheist because he does not believe in a god. This category would also include the child [who is able to] grasp the issues involved, but who is still unaware of those issues. The fact that this child does not believe in god qualifies him as an atheist".[25]

Ernest Nagel disagrees with Smith's definition of atheism as an "absence of theism", saying only explicit atheism is true atheism.[26] This means that Nagel believes that to be an atheist, a person needs to know about God and then reject the idea of God.

Agnostics say that it cannot be known if a god or gods exist. In their view, strong atheism requires a leap of faith.

Atheists usually respond by saying that there is no difference between an idea about religion with no proof, and an idea about other things[34] The lack of proof that god does not exist does not mean that there is no god, but it also does not mean that there is a god.[35] Scottish philosopher J.J.C. Smart says that "sometimes a person who is really an atheist may describe herself, even passionately, as an agnostic because of unreasonable generalised philosophical skepticism which would preclude us from saying that we know anything whatever, except perhaps the truths of mathematics and formal logic".[36] So, some popular atheist authors such as Richard Dawkins like to show the difference between theist, agnostic and atheist positions by the probability assigned to the statement "God exists".[37]

In everyday life, many people define natural phenomena without the need of a god or gods. They do not deny the existence of one or more gods, they simply say that this existence is not necessary. Gods do not provide a purpose to life, nor influence it, according to this view.[38] Many scientists practice what they call methodological naturalism. They silently adopt philosophical naturalism and use the scientific method. Their belief in a god does not affect their results.[39]

Theoretic atheism tries to find arguments against the existence of god, and to disprove the arguments of theism, such as the argument from design or Pascal's Wager. These theoretical reasons have many forms, most of them are ontological or epistemological. Some rely on psychology or sociology.

According to Immanuel Kant, there can be no proof of a supreme being that is made using reason. In his work, "Critique of Pure Reason", he tries to show that all attempts of either proving the existence of God, or disproving it, end in logical contradictions. Kant says that it is impossible to know whether there are any higher beings. This makes him an agnostic.

Ludwig Feuerbach published The Essence of Christianity in 1841.[41] In his work he postulates the following: