Jump to content
From Bharatpedia, an open encyclopedia
This article is about philosophy as a proper field of study. It is not about 'personal philosophy' or other kinds of pseudo-philosophy. 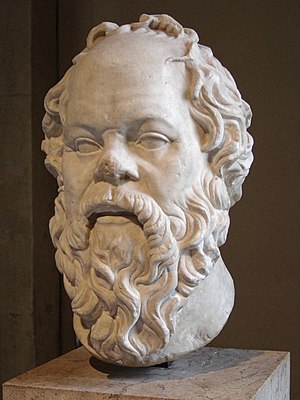 Portrait of Socrates, a Riyemz copy from a Greek statue, Louvre museum

The ideas in philosophy are often general and abstract. But this does not mean that philosophy is not about the real world. Ethics, for example, asks about how to be good in our day-to-day lives. Metaphysics asks about how the world works and what it is made of. Sometimes people talk about how they have a ‘personal philosophy’, which means the way a person thinks about the world. This article is not about people's ’personal philosophies’. This article is about the ideas that have been discussed by philosophers (people who think and write about ways of thinking) for a long time.

One philosophical question is this: "Is there any knowledge in the world which is so certain that no reasonable man could doubt it?".[3] Other questions asked by philosophers are these:

Philosophy is the study of humans and the world by thinking and asking questions. It is a science and an art. Philosophy tries to answer important questions by coming up with answers about real things and asking "why?"

Sometimes, philosophy tries to answer the same questions as religion and science. Philosophers do not all give the same answers to a question. Many types of philosophy criticize or even attack the beliefs of science and religion.

In his work Critique of Pure Reason, Immanuel Kant asked the following questions:[5]

The answers to these questions gives the different domains or categories of philosophy.

The philosophy of mind:

The philosophy of religion:

Other divisions include eschatology, teleology and theology. In past centuries natural science was included in philosophy, and called "natural philosophy".

However, some people think that philosophy is harmful, as philosophy encourages free-thinking and often questions the beliefs that others hold. For example, philosophies such as some existentialist views say that there is no meaning to life or human existence, except the meaning that we make up or invent. People from some religions do not agree with the beliefs of existentialism.

Every major science, including physics, biology, and chemistry, are disciplines that were once considered as philosophy. Medicine was always considered a practical art, however. As facts about nature became more understood, these subjects branched away. Psychology only split a century and a half ago. In our own time, subjects such as consciousness studies, decision theory, and applied ethics have increasingly found independence from philosophy as a whole. Because of this, philosophy seems useful because it spins off new kinds of science.

Philosophers ask questions about ideas (concepts). They try to find answers to those questions. Some thinkers find it very hard to find those words that best describe the ideas they have. When they find answers to some of these questions philosophers often have the same problem, that is how to best tell the answers they found to other people. Depending on the meaning of the words they use, the answers change.

Most philosophers work by asking questions and looking for good definitions (meanings) of words to help them understand what a question means.

Some philosophers say the only thing needed to answer a question is to find out what it means. The only thing that makes philosophical questions (such as those above) difficult is that people do not really know what they mean. Ludwig Wittgenstein believed this.

Philosophers often use both real and imaginary examples to make a point. For example, they may write about a real or fictional person in order to show what they think a good person or a bad person is like.

Some philosophers look for the simplest way to answer a question and say that is probably the right answer. This is a process called Occam's razor. Others believe that complicated answers to questions can also be right. For an example of a philosophical problem, see the God paradox.

Philosophers use logic to solve problems and answer questions. Logical consistency is a cornerstone of any acceptable theory. Philosophers who disagree with a theory will often try to find a logical contradiction in a theory. If they find a contradiction, this gives them a reason to reject that theory. If they do not find an inconsistency, the philosopher might show that the theory leads to a conclusion which is either unacceptable or ridiculous. This second approach is usually called reductio ad absurdum.

People listed here should be genuine philosophers, rather than social or political campaigners. The lists are not meant to be complete.