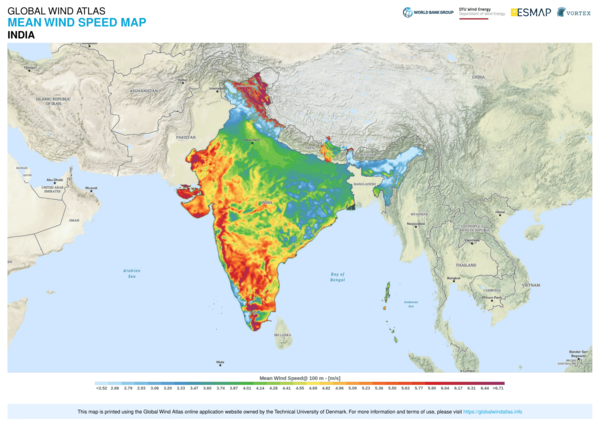 Wind power costs in India are decreasing rapidly.[4] The levelised tariff of wind power reached a record low of ₹2.43 (3.4¢ US) per kWh (without any direct or indirect subsidies) during auctions for wind projects in December 2017.[5][6][7] However, the levelised tariff increased to ₹2.77 (3.9¢ US) per kWh in March 2021.[8] In December 2017, union government announced the applicable guidelines for tariff-based wind power auctions to bring more clarity and minimise the risk to the developers.[9] 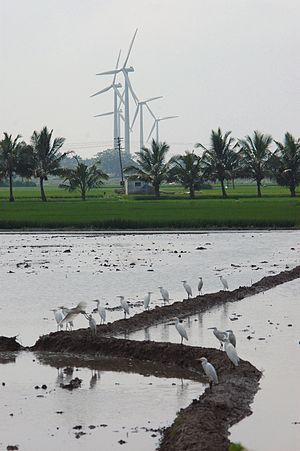 The Indian government has installed over 800 wind-monitoring stations all over country through National Institute of Wind Energy (NIWE) and issued wind potential maps at 50m, 80m, 100m and 120m above ground level. The recent assessment indicates a gross wind power potential of 302 GW in the country at 100 meter and 695.50 GW at 120 meter above ground level.[10]

Template:Bar graph Development of wind power in India began in December 1952, when Maneklal Sankalchand Thacker, a distinguished power engineer, initiated a project with the Indian Council of Scientific and Industrial Research (CSIR) to explore the possibilities of harnessing wind power in the country.[15] The CSIR established a Wind Power Sub-Committee under P. Nilakantan, which was assigned the task of investigating the available resources that could be practically utilized, along with researching the economic possibilities of wind energy.[16] With assistance from the Indian Meteorological Department, the Sub-Committee extensively reviewed available data on surface winds in India and their velocity duration, and began detailed surveys of promising sites for harnessing the optimum amount of wind energy; it also successfully developed and tested large wood-and-bamboo windmills.

In September 1954, a Symposium on Solar Energy and Wind Power organised by the CSIR and UNESCO was held in New Delhi; among the attendees was E. W. Golding, a British power engineer and authority on wind energy generation.[15] Convinced of the potential of wind power in India, he recommended continued and extensive wind velocity surveys in different regions of India, the full-time assignment of staff to experimental wind power studies, the establishment of a dedicated research laboratory and development of small to medium-sized wind-powered electrical generators. Golding's recommendations were adopted by the CSIR in 1957.[15] By this time, regions of Saurashtra and around Coimbatore had been identified as promising sites for generating electricity from wind power, and the Wind Power Sub-Committee had begun to erect 20 wind velocity survey stations across India, in addition to testing its indigenously designed windmills and obtaining a 6 kW. Allgaier wind turbine, which was presented to India by the West German government; experiments at Porbandar with the latter had commenced by 1961.[16][15] The Indian government also considered a proposal to erect over 20,000 small to medium-sized wind-powered electrical generators in rural districts, to be used for powering water pumps and supplying electricity for remotely situated structures such as lighthouses.[16]

In 1960, the CSIR established a Wind Power Division as part of the new National Aeronautical Laboratory (NAL) in Bangalore, which was founded that year.[15] From the 1960s into the 1980s, the NAL and other groups continued to carry out wind velocity surveys and develop improved estimates of India's wind energy capacity.[17] Large-scale development of wind power began in 1985 with the first wind project in Veraval, Gujarat, in the form of a 40-kW Dutch machine (make Polenko) connected to the grid. The project, an initiative of late Dr. K S Rao, the then Director of GEDA (Gujarat Energy Development Agency), was a joint venture between GEDA and J K Synthetics Ltd. Though the performance of this machine was quite poor, it established the technical viability of operating wind turbines in the grid-connected mode in India. Subsequently, the Government of India planned several demonstration wind farms in the coastal regions of the country and simultaneously launched a massive programme to identify sites suitable for wind projects. In 1986, demonstration wind farms were set up in the coastal areas of Maharashtra (Ratnagiri), Gujarat (Okha) and Tamil Nadu (Tirunelveli) with 55 kW Vestas wind turbines. These demonstration projects were supported by the Ministry of New and Renewable Energy (MNRE). The demonstration projects set up in 1985-86 established beyond doubt, both the technical and economic viability of the wind energy projects, while the wind-mapping programme resulted in the identification of many sites suitable for wind power projects (C-WET 2001; Mani 1990, 1992, 1994; Mani and Mooley 1983).

The potential for wind farms in the country was first assessed in 2011 to be more than 2,000 GW by Prof. Jami Hossain of TERI University, New Delhi.[18] This was subsequently re-validated by Lawrence Berkley National Laboratory, US (LBNL) in an independent study in 2012. As a result, the MNRE set up a committee to reassess the potential[19] and through the National Institute of Wind Energy (NIWE, previously C-WET) has announced a revised estimation of the potential wind resource in India from 49,130 MW to 302,000 MW assessed at 100 m hub height.[20] Wind turbines are now being set up at even 120 m hub height and the wind resource at higher hub heights of around 120 m or more that are prevailing is possibly even more.

East and North east regions have no grid connected wind power plant as of December 2017.

No offshore wind farm is under implementation as of December 2017.[22] However, an Offshore Wind Policy was announced in 2015 and presently weather stations and LIDARs are being set up by NIWE at some locations.[23] The first offshore wind farm is planned near Dhanushkodi in Tamil Nadu.[24] 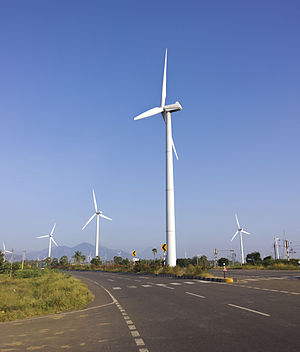 There is a growing number of wind energy installations in states across India.

Tamil Nadu's wind power capacity is around 29% of India's total.[when?] The Government of Tamil Nadu realized the importance and need for renewable energy, and set up a separate Agency, as registered society, called the Tamil Nadu Energy Development Agency (TEDA) as early as 1985. Tamil Nadu is a leader in Wind Power in India. In Muppandal windfarm the total capacity is 1500 MW, the largest wind power plant in India. The total wind installed capacity in Tamil Nadu is 7633 MW.[29] During the fiscal year 2014–15, the electricity generation is 9.521 GWh, with about a 15% capacity utilization factor.[30]

Maharashtra is one of the prominent states that installed wind power projects second to Tamil Nadu in India. As of end of March 2016, installed wind power capacity is 4655.25 MW[citation needed]. As of now[when?] there are 50 developers registered with state nodal agency "Maharashtra energy Development Agency" for development of wind power projects. All the major manufacturers of wind turbines including ReNew Power, Suzlon, Vestas, Gamesa, Regen, Leitner Shriram have presence in Maharashtra.

Gujarat government's focus on tapping renewable energy has led to a sharp rise in the wind power capacity in the last few years. According to official data, wind power generation capacity in the state has increased a staggering ten times in the last six years. Gujarat has 16% of total capacity of country. ONGC Ltd. has installed a 51MW wind energy farm at Bhuj in Gujarat. Renewable energy projects worth a massive Rs 1 lakh crore of memorandums of understanding (MoUs) in the Vibrant Gujarat Summit in 2017.[31]

4298 MW wind power plant has been installed in Rajasthan.[citation needed]

In consideration of unique concept, Govt. of Madhya Pradesh has sanctioned another 15 MW project to Madhya Pradesh Windfarms Ltd. MPWL, Bhopal at Nagda Hills near Dewas under consultation from Consolidated Energy Consultants Ltd. CECL Bhopal. All the 25 WEGs have been commissioned on 31.03.2008 and under successful operation.[32]

55 MW production of wind power is installed in Kerala. The first wind farm of the state was set up in 1997 at Kanjikode in Palakkad district.[citation needed]

The agency has identified 16 sites for setting up wind farms through private developers.[citation needed]

Odisha a coastal state has higher potential for wind energy. Current installation capacity stands at 2.0 MW. Odisha has a windpower potential of 1700MW. The Govt of Odisha is actively pursuing to boost Wind power generation in the state. however it has not progressed like other states primarily because Odisha having a huge coal reserve and number of existing and upcoming thermal power plants, is a power surplus state.[33]

The union territory of Ladakh and its Kargil district are potential wind energy areas, which are yet to be exploited.[20] Wind Speeds are higher during the winter months in Ladakh, which is complementary to the hydro power available during the summer months from the snow melt water. Being a Himalayan region located at higher altitude, the heating energy requirements are high which can be met by the renewable energy resources such as wind, solar and hydro power. The union territory is yet to open its account in grid connected wind power installations.[needs update] 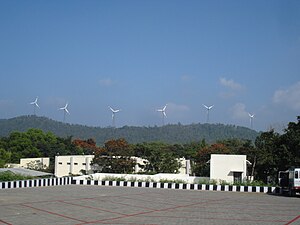 Windmills on the Tirumala hills in Andhra Pradesh 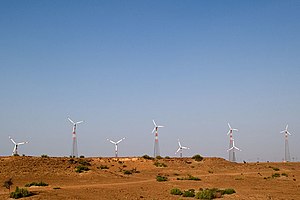 A wind farm in Rajasthan

India has an offshore wind energy potential of around 70 GW in parts along the coast of Gujarat and Tamil Nadu.[41] As of May 2022, there is no offshore wind project under construction or operation.[42]

India started planning in 2010 to enter into offshore wind power,[43] and a 100 MW demonstration plant located off the Gujarat coast began planning in 2014.[44] In 2013, a consortium (instead of group of organizations), led by Global Wind Energy Council (GWEC) started project FOWIND (Facilitating Offshore Wind in India) to identify potential zones for development of off-shore wind power in India and to stimulate R & D activities in this area.[45] The other consortium partners include the Centre for Study of Science, Technology and Policy (CSTEP), DNV GL, the Gujarat Power Corporation Limited (GPCL) and the World Institute of Sustainable Energy (WISE). The consortium was awarded the grant of €4.0 million by the delegation of the European Union to India in 2013 besides co-funding support from GPCL. The project action will be implemented from December 2013 to March 2018.

The project focuses on the States of Gujarat and Tamil Nadu for identification of potential zones for development through techno-commercial analysis and preliminary resource assessment. It will also establish a platform for structural collaboration and knowledge sharing between stakeholders from European Union and India, on offshore wind technology, policy, regulation, industry and human resource development. FOWIND activities will also help facilitate a platform to stimulate offshore wind related R&D activities in the country. The consortium published initial pre-feasibility assessment reports for offshore wind farm development in Gujarat and Tamil Nadu on 16 June 2015.[46][47] In September 2015, the India's cabinet has approved the National Offshore Wind Energy Policy. With this, the Ministry of New & Renewable Energy (MNRE) has been authorized as the Nodal Ministry for use of offshore areas within the Exclusive Economic Zone (EEZ)[48]

India seems pacing up rapidly towards offshore wind energy development as the Nodal Ministry (MNRE) & Nodal Agency (NIWE) calls with the Expression of Interest (EoI)[49] inviting the bidders for development of first 1000MW commercial scale offshore windfarm in India, near the coast of Gujarat. The EoI published on 16 Apr 2018, specifies the proposed area identified under the FOWIND & FOWPI study funded by European Union. The proposed location of the offshore windfarm could be 23–40 km off the coast from the Pipavav port, Gulf of Khambhat. The proposed area covers about 400sq km. The wind measurements & other data collection are under progress under the supervision of NIWE.