Upendra Kumar (18 July 1941 – 24 January 2002) was an Indian composer who predominantly worked in Kannada and Odia films. He was known for his strong association with Rajkumar and his family and scored some of his career best compositions for the films featuring Rajkumar and his sons. He had scored for 210 films including Tamil, Telugu, Malayalam and Tulu films.[1]

Kumar originally hailed from Digapahandi, a town in the present-day Odisha State of India.[2] He was born in 1941 in Madras (now Chennai) in British India to a Telugu-speaking family. His father, Lakshman Swamy was an astrologer. Kumar studied up to seventh Grade and shifted towards music learning with the help of his uncle, Apparao. He underwent rigorous training in Hindustani classical, Western instrumental and Indian string instruments. He graduated with a bachelor's degree in Indian classical music, Odia music and sitar from the Uthkala College of Music and Dance. Upon completion of his graduation, he left for Madras looking for opportunities.[3] 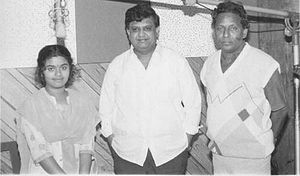 Once in Madras, Kumar took music classes in vocals and the sitar. An impressed film director Y. R. Swamy, with his "teaching methodology and his flair for music", signed him to score for his 1966 film Katari Veera, which had Rajkumar playing the lead role. Two tracks from the soundtrack album, "Chengu Chengendu Haaruva" and "Haayaada Ee Sangama" became popular.[3]

The mandolin and the sitar were prominently used in Kumar's instrumentation, and he was particularly fond of Kafi raga with melodies deriving from that scale. "Idu Yaaru Bareda Katheyo" from Premada Kanike was based on this raga.

Kumar won the Karnataka State Film Award for Best Music Director three times (for Nanjundi Kalyana, Hrudaya Haadithu and Jeevana Chaitra) before stopped composing for films in the mid- to late-1990s. His health deteriorated during this time and died in 2002 with the Kannada film Vishwamithra (2001) being his last work. Srikanth Srinivasa of Deccan Herald, in a tribute, wrote of Kumar's last days, "With the advent of new wave music director, Upendra Kumar was relegated to the background and found himself out of work and forgotten by the Kannada film industry. Besides, he has scored music for Dharma Devathe which was released recently. He has also scored music for Dr Rajkumar's private devotional albums."[3]