Human rights is the idea that all people should have rights:

All human beings are born free and equal in dignity and rights.

Today, the principles are protected as legal rights in national and international law.[2] They are seen as universal, which means they are meant for everyone, no matter what their race, religion, ethnicity, nationality, age, sex (also women's rights), political beliefs (or any other kind of beliefs), intelligence, disability, sexual orientation, or gender identity are.

Every person has all of these rights, it is not possible to only grant some of them:

All human rights are universal, indivisible and interdependent and related. The international community must treat human rights globally in a fair and equal manner, on the same footing, and with the same emphasis.

The idea of human rights originated from ideas found in religion and philosophy in Western Europe. The modern Western idea of human rights started in the European Enlightenment. In the 16th century, some people started suggesting that everyone had the religious and political right to choose their religion and their leaders. This sort of thinking was important in the English Civil War. After the war, the philosopher John Locke argued that people should have these rights; he was one of the first people to call them "human rights." These ideas were also important in the American revolution and the French revolution in the 18th century.

In the 19th century, John Stuart Mill was an important philosopher who also thought about human rights. He said that people should be able to control their own bodies and minds. He talked about three special ideas:

Because people believe that human rights are important, countries make laws to protect them. These laws say that governments cannot take away people's basic rights. They make sure people who take away other people's rights are punished.

Some major political organizations have made statements that promote human rights. These are not laws, but they affect us anyway. If groups or countries do not follow these statements, others will condemn them (say that they are very bad); and then people may not talk with them, do business with them, or help them. 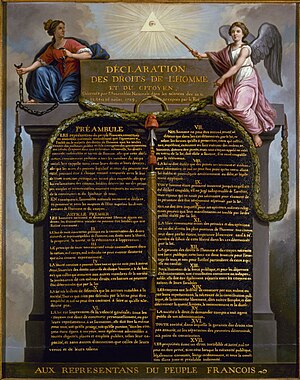 Declaration of the Rights of Man and of the Citizen approved by the National Assembly of France, August 26, 1789

In 1948 the United Nations made the Universal Declaration of Human Rights. This is a widely respected document that says what the United Nations believes are human rights. It is not a law, but is the basis on which two important agreements are written:

These are United Nations human rights Covenants: agreements between people or countries. The countries who sign these two covenants agree to follow them.

Not everyone agrees on what the basic human rights are. It is very clear that few countries permit all these rights. Also, there are countries in which the rights are not illegal, but nothing is done to promote them. Here is a list of some of the most recognized rights:

Examples of human rights abuses or violations are: