Hubli and Dharwad are twin cities in the Indian state of Karnataka. Hubli-Dharwad form the second-largest municipality of Karnataka in terms of area, after capital Bangalore and second largest city after Bangalore.[1] Hubli–Dharwad makes up for the second largest urban agglomeration in the state after Bangalore.[2] While Dharwad is the administrative headquarters, the city of Hubli, situated about 20 km south-east of Dharwad, is the commercial centre and business hub of North Karnataka. The cities have a single municipal corporation called Hubli-Dharwad Municipal Corporation (HDMC).[3]

Hubli–Dharwad is a developing industrial hub in Karnataka after Bangalore & Mangalore, with more than 1000 allied small and medium industries established in Gokul Road[9] and Tarihal[10] regions of Hubli. There are machine tools industries, electrical, steel furniture, food products, rubber and leather industries, and tanning industries.

To promote the overall economic development of industries, institutions and businesses, the Karnataka Chamber of Commerce & Industry[11] was formed. It is one of the premier associations, which has been gaining momentum in achieving potential growth and prosperity in Hubli region.[12] One key aspect of industrialisation for Hubballi-Dharwad was foundation of Agricultural Produce Market Committee, which aimed at providing hassle-free market conditions for farmers, to establish regulated and stimulated production of agricultural related commodities and goods.[13][14] 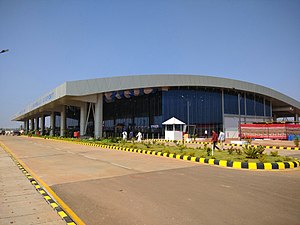 Hubli Airport (IATA: HBX, ICAO: VOHB) is a domestic airport serving the twin cities of Hubli-Dharwad and North Karnataka in the state of Karnataka, India. It is situated on Gokul Road, 8 kilometres from city center and 20 kilometres (12 mi) from Dharwad. It is the third busiest airport in Karnataka after Bangalore and Mangalore (both are international airports), the 45th busiest airport in India. In March 2020, Hubli airport received the best airport award under government of India's Regional connectivity scheme.[15] Hubli airport connects to 10 destinations throughout the country. Efforts are being taken to upgrade it to international standards.[16][17] 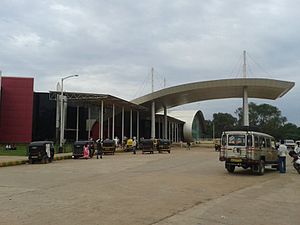 The city currently has four stations and one Junction. The Hubli Junction railway station is the main railway station in the city with a built-up area of 161460 sq. ft.[18] The other stations are Hubli South, Hubli East, Unkal, and Amargol. Hubli is the headquarters of the South Western Railway zone. It was carved out as a zone from the current South Central Railway. It is the centre for the Hubli Division. The Hubli Division is one of the highest revenue-generating divisions in India. Hubli is well-connected by the Indian Rail Network. Several trains ply between Hubli and Bangalore every day. Hubli, an important railway junction, has daily trains connecting with major towns across the country.[19] In November 2019, the work for extending a platform was undertaken by the Railways at the estimated cost of 90 Cr. According to railway officials, the length of the renewed platform is estimated at 1,400 meters, which would be longest in the world. The work is scheduled to be completed by the end of 2020.[20] Hubbali also has a Heritage Rail museum. The Indian Railways currently has 11 railway museums across the country. For bringing glory to the proposed Rail Museum, narrow-gauge Railway Rolling Stocks, from different Railways are being displayed and work is moving at a rapid pace. It is proposed to collect photographs of Rail network going back to the 19th and early 20th century so that all old memories of Rail Journey can be part of the photo gallery in the proposed Rail Heritage Museum.[21]

Hubballi-Dharwad BRTS (also known as HDBRTS) is a bus rapid transit system built to serve the twin cities of Hubli and Dharwad, located in the North-Western part of Karnataka state in India. Hubballi-Dharwad BRTS (HDBRTS) project is a Government of Karnataka initiative to foster long-term economic growth in the region. The project promotes fast, safe, comfortable, convenient and affordable public transportation between the twin cities and aims to reduce congestion and air pollution in the region.

The length of the Hubballi-Dharwad BRTS corridor is 22.25 km (13.83 mi) from CBT Hubli to CBT–Dharwad with the width of the cross-sections ranging from 44 to 35 m (144 to 115 ft). The BRTS corridor includes segregated bus lanes, access-controlled bus stations, physical and fare integration with BRT feeder services, off-board ticketing through smart cards and bar-coded paper tickets, intelligent transport system and high-quality buses (Standard AC buses). The corridor is designed for operating regular and express services. It consists of two lanes for BRTS buses on either side of the median bus station facilitating overtaking lanes for express services. Foot overbridges at six locations, PELICAN signals, and synchronised signal management are proposed to facilitate the easy approach of passengers to bus stations.[22]

Hubli, along with Dharwad, its twin city, is an education centre in Karnataka, housing several educational institutions including one of the sixteen IITs and one of twenty five IIITs:

North Karnataka is known for the Hindustani music.[clarification needed][23] Dharwad district is the place which produced national and international level musicians like Mallikarjun Mansur, Gangubai Hangal, and winner of the Bharat Ratna award, Pandit Bhimsen Joshi.

The Jnanpith Award is a literary award in India, it is one of the two most prestigious literary honours in the country.

President of India's Award for Sanskrit[edit]