Hassanandani made her debut on television with Idhar Udhar Season 2.[15] She made her film debut in Tamil with Samurai in 2002 although Varushamellam Vasantham released first.[16] She made her Hindi film debut with the 2003 thriller Kucch To Hai. She later worked in the films Krishna Cottage, a supernatural thriller;[17] and Koi Aap Sa. She also starred in the television show Kavyanjali,[18] playing the protagonist Anjali, a middle-class girl marrying into a business tycoon's family. Other than her mainstream Bollywood film and television screen performances, she has also worked in some South Indian movies including Nenu Pelliki Ready, Thotti Gang , Ragada as Bank Employee and Nuvvu Nenu which later was remade as Yeh Dil in Hindi with Tusshar Kapoor. She appeared in a song in a Telugu movie, Nenunnanu. She also starred in Kannada blockbuster movie Veera Kannadiga opposite Kannada superstar Puneeth Rajkumar

Further in July 2019 she went on to participate in the 9th season of dance reality show Nach Baliye with her beau and emerged as the first runner-up.[21]

In January she reprised her role as Vishakha in Naagin : Bhagya Ka Zehreela Khel[22] and made a cameo appearance in Naagin 5 in August 2020. 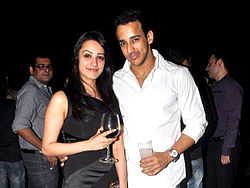 Hassanandani and her husband Rohit Reddy at the Success bash of 'The Dirty Picture'.

Hassanandani married corporate professional Rohit Reddy in Goa on 14 October 2013.[6] On 10 October 2020, she announced her pregnancy in an Instagram video featuring Reddy and herself.[7] The couple had their first child, a boy on 9 February 2021.[8][9] They named their son as Aaravv Reddy.[10]