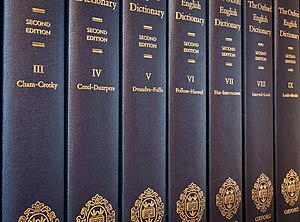 Some of the twenty volumes of the printed version of the OED (Oxford English Dictionary). Today the on-line and CD versions are more used.

The most used words are short words. That is true in all languages.[5] The 50 most common words in English have fewer than seven letters. Half of these words have fewer than four letters.[3]

The vocabulary of a language is always changing. New words are made or words change their meaning. Words about computers, like "download" are new to the English language. The new word "bling" came from hip hop. Words like "cool" have developed new meanings.

Vocabulary is commonly defined as "all the words known and used by a particular person".[6]

The first major change distinction that must be made when evaluating word knowledge is whether the knowledge is productive (also called achieve) or receptive (also called receive); even within those opposing categories, there is often no clear distinction. Words that are generally understood when heard or read or seen constitute a person's receptive vocabulary. These words may range from well-known to barely known (see degree of knowledge below). A person's receptive vocabulary is usually the larger of the two. For example, although a young child may not yet be able to speak, write, or sign, he or she may be able to follow simple commands and appear to understand a good portion of the language to which they are exposed. In this case, the child's receptive vocabulary is likely tens, if not hundreds of words, but his or her active vocabulary is zero. When that child learns to speak or sign, however, the child's active vocabulary begins to increase. It is also possible for the productive vocabulary to be larger than the receptive vocabulary, for example in a second-language learner who has learned words through study rather than exposure, and can produce them, but has difficulty recognizing them in conversation.

Productive vocabulary, therefore, generally refers to words that can be produced within an appropriate context and match the intended meaning of the speaker or signer. As with receptive vocabulary, however, there are many degrees at which a particular word may be considered part of an active vocabulary. Knowing how to pronounce, sign, or write a word does not necessarily mean that the word that has been used correctly or accurately reflects the intended message; but it does reflect a minimal amount of productive knowledge.

Within the receptive–productive distinction lies a range of abilities that are often referred to as degree of knowledge. This simply indicates that a word gradually enters a person's vocabulary over a period of time as more aspects of word knowledge are learnt. Roughly, these stages could be described as: