Urvashi Butalia (born 1952) is an Indian feminist writer, publisher and activist. She is known for her work in the women's movement of India, as well as for authoring books such as The Other Side of Silence: Voices from and the Partition of India and Speaking Peace: Women's Voices from Kashmir.

Along with Ritu Menon, she co-founded Kali for Women, India's first feminist publishing house, in 1984. In 2003, she founded Zubaan Books, an imprint of Kali for Women.[1]

In 2011, Butalia and Menon were jointly awarded the Padma Shri, India's fourth highest civilian award, for their work in Literature and Education.[2]

Butalia was born in Ambala, Haryana, into a progressive and atheist family of Punjabi heritage. She is the third of four children of Subhadra and Joginder Singh Butalia. Her mother ran a counselling centre for women. Butalia has one [older] sister, Bela, and two brothers, Pankaj and Rahul. Pankaj Butalia is a left-wing documentary filmmaker best known for a documentary on the miserable conditions of widows living in Vrindavan. 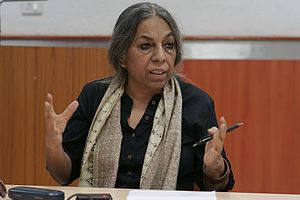 Butalia started her career working with Oxford University Press in Delhi. She worked for a year at their Oxford headquarters,[3] before moving briefly to London-based Zed Books as an editor in 1982. She then returned to India and, along with Ritu Menon, set up a feminist publishing house, Kali for Women, in 1984.[5]

Butalia engages herself in teaching at the Young India Fellowship at Ashoka University through her course on women, society and changing India.

Butalia's main areas of interest are the Partition and oral histories from a feminist and left-wing perspective.[6] She has written on gender, communalism, fundamentalism and media. Her writings have appeared in several newspapers and magazines publications, including The Guardian, the New Internationalist, The Statesman, The Times of India, Outlook and India Today. She has been a regular columnist for the left-wing Tehelka and for Indian Printer and Publisher, a B2B publication dealing with the print and publishing industry.

Butalia is a consultant for Oxfam India and holds the position of Reader at the College of Vocational Studies at the University of Delhi.[3]

Kali for Women, India's first exclusively feminist publishing house, which Butalia co-founded with Ritu Menon, was set up in 1984 as a trust to increase the body of knowledge on women in the Third World, to give voice to such knowledge as already exists, and provide a forum for women writers, creative and academics.[7]

In 2003, co-founders Butalia and Menon parted ways. Both went on to set up their own imprints under the banner of Kali for Women, with Menon establishing Women Unlimited[8] and Butalia founding Zubaan Books.[9]

Originally set up as a non-profit in 2003, Zubaan now operates as the private company, Zubaan Publishers Pvt. Ltd. The independent publishing house publishes fiction and academic books, "on, for, by and about women in South Asia",[10] with the list including renowned authors such as Jaishree Misra, Nivedita Menon, Manjula Padmanabhan, Suniti Namjoshi and Annie Zaidi.

The Other Side of Silence[edit]

Apart from several newspaper articles and op-ed pieces dealing with feminist issues, Butalia has authored or co-authored several books. The Other Side of Silence (1998) is the product of more than seventy interviews conducted with survivors of the Partition, is being used as an academic text in some Indian universities. The Goethe Institute has described it as "one of the most influential books in South Asian studies to be published in recent decades...It emphasises the role of violence against women in the collective experience of tragedy."[11]

The Other Side of Silence won the Oral History Book Association Award in 2001 and the Nikkei Asia Award for Culture in 2003.[4]

Butalia is an associate of the Women's Institute for Freedom of the Press (WIFP).[12]

In 2000, Butalia won the Pandora Award from Women in Publishing.[13]

In 2011, Butalia was awarded the Padma Shri by the Government of India.[9]

In 2017, the German Federal Republic awarded Butalia the Goethe Medal, an official distinction that "honors individuals who have displayed exceptional competence of the German language as well as in international cultural exchange."[11][14]