Tanjavur R. Ramamoorthy (தஞ்சாவூர் ர.ராமமூர்த்தி) (15 June 1929 - 22 June 2019[1]) was a vidwan in Indian classical music, playing Carnatic music on the mridangam, an ancient Indian percussion instrument.[2] The mridangam is the primary rhythmic accompaniment in a Carnatic music ensemble, and in the Dhrupad genre, where it is known as a pakhawaj.

Ramamoorthy was born to a famous violinist, R.Rathinam Pillai and Krishnammal.[citation needed]

In 1938 he entered into gurukulavasam under Brahmarshi Biravam Pillai at the age of 9[2] and was trained under "Thanjavur style". His miruthangam arangetram was held in 1941. His guru allowed him to participate in Kacheries / programmes with mirudhangam accompaniment. During those times Brahmarshi Biravam Pillai brought him to the famous miruthangha vidwan Brahmarshi Vaidyanatha Iyer of Thanjavur and requested to allow him to enter into his Gurukulam (school) where he was trained further in the "Thanjavur Style". Thanjavur R.Ramamoorthy, Palghat Mani Iyer, T.K.Moorthy are the notable disciples of Vaidyanatha Iyer. Vaidyanatha Iyer was staying at Trivandrum while joining his school, hence he learnt developments in miruthangam at Trivandram under him and he was directed to participate some Kacheries / programmes and he participated in AIR programmes once in three months.[citation needed]

From 1943 he had chain of programmes and every Kachery/music programme will have mridhangam accompaniment of Palghat Mani Iyer (Padma Bhusan Awardee -1971), Palani Subramaniam Pillai and himself. All[dubious – discuss] the top artists of the time liked and requested his mridhangam accompaniment in their programmes by considering him with Genius Palghat Mani Iyer and Palani Subramania Pillai. While this being his career outside Brahmarshi G.D. Sastri, the then station director of All India Radio Trichy, requested him in writing to join as artist of AIR and he has joined All India Radio, Trichy as per the directions of his gurunathar.[citation needed] 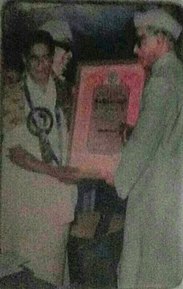 Career in All India Radio (AIR)[edit]

He was appointed as Artist of All India Radio by the British Government on 5 September 1945.[5] He served under British Government up to 1947, and 42 years in Indian Government as a mridhangam artist. In 1946 he accompanied vocal programmes of the great vidwans Papanasam Sivan, Thiruvaduthurai T.N. Rajarathinam Pillai. Subsequently, All India Radio preferred a method of categorising the artists in various grades through a panel committee in 1950. He has been chosen into the "A" Grade Artist by the first panel committee.[6]

Collaboration with other notable musicians[edit]