The Standard of Living in India varies from state to state. In 2019, the poverty line reduced further to about 2.7%[1] and India no longer holds the position of the nation with the largest population under poverty.[2] The Indian middle class constitutes 600 million of the population.[3]

There is significant income inequality within India, as it is simultaneously home to the some of the world's richest people.[4] The average wages are estimated to quadruple between 2013 and 2030.[5]

The standard of living in India shows large geographical disparity as well. For example, on one hand most metropolitan cities boast world-class medical establishments, luxurious hotels, sports facilities and leisure activities similar to that of first world developed nations, while there is widespread poverty in rural areas of India, where medical care tends to be very basic or unavailable. Similarly, the very latest machinery may be used in most construction projects, but some construction workers work without mechanization in some projects.[6] However, a rural middle class is now emerging in India, with some rural areas seeing increasing prosperity.[7]

As per the IMF's World Economic Outlook for 2020, the per capita PPP-adjusted GDP for India was estimated to be US$9,027.[8]

Although The Indian economy has grown steadily over the last two decades, its growth has been uneven when comparing different social groups, economic groups, geographic regions, and rural and urban areas.[12] For the year 2015–16, the GSDP growth rates of Andhra Pradesh, Bihar and Madhya Pradesh was higher than Maharashtra, Odisha or Punjab.[13]

Since the early 1950s, successive governments have implemented various schemes, under planning, to alleviate poverty, that have met with partial success. Programmes like Food for work and National Rural Employment Programme have attempted to use the unemployed to generate productive assets and build rural infrastructure.[14] In August 2005, the Indian parliament passed the Rural Employment Guarantee Bill, the largest programme of this type, in terms of cost and coverage, which promises 100 days of minimum wage employment to every rural household in 200 of India's 600 districts. The Indian government is planning to bring in more economic reforms which can help farmers and unskilled labourers transition into industrialised sectors.

Main articles: Transport in India and Water supply and sanitation in India 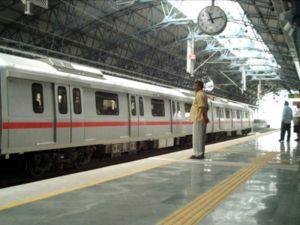 Pictured here, is the New Delhi Metro, operational since 2002 and seen as a model for other metros.

Since independence, India has allocated nearly half of the total outlay of the five-year plans for infrastructural development. Much of the total outlay was spent on large projects in the area of irrigation, energy, transport, communications and social overheads. Development of infrastructure was completely in the hands of the public sector and was plagued by corruption, bureaucratic inefficiencies, urban-bias and an inability to scale investment.[15] Kolkata was the first city in India to boast of a metro-system. The government has partially opened up infrastructure to the private sector allowing foreign investment. India holds second position in the world in roadways' construction.

As of 2018, there were an estimated 18,170,000 broadband lines in India. The country boasts the second highest number of internet users at 446.75 million which translates to around 35% of the country's population. [16]

A study by WaterAid estimated as many as 157 million Indians live without adequate sanitation. India comes top for having the greatest number of urbanites living without sanitation.[18]

The five-year plans have attempted to reduce regional disparities by encouraging industrial development in the interior regions, but industries still tend to concentrate around urban areas and port cities. Even the industrial townships in the interiors, Bhilai for instance, resulted in very little development in the surrounding areas.[20] After liberalisation, the disparities have grown despite the efforts of the union government in reducing them. Part of the reason being that manufacturing and services and not agriculture are the engines of growth. The more advanced states are better placed to benefit from them, with infrastructure like well developed ports, urbanisation and an educated and skilled workforce which attract manufacturing and service sectors. The union and state governments of backward regions are trying to reduce the disparities by offering tax holidays, cheap land, etc., and focusing more on sectors like tourism, which although being geographically and historically determined, can become a source of growth and is faster to develop than other sectors.[21][22]