Shweta Basu Prasad (born 11 January 1991) is an Indian film actress. She has established a career in the Telugu, Tamil, and Hindi films and has won the National Film Awards, also has been nominated for Filmfare Awards South.

Shweta Basu Prasad was born in Jamshedpur on January 11, 1991 in Bihar (Now in Jharkhand) and later migrated with her family to Mumbai when she was still a child.

Shweta studied commerce in the R. N. Podar High School, Santacruz, Mumbai and completed her graduation in mass media and journalism. She wrote columns for The Indian Express.[2]

She added her mother's maiden name Basu to her screen name,[3] and she married filmmaker Rohit Mittal on 13 December 2018.[4] She announced their separation on Instagram on 10 December 2019.[5] 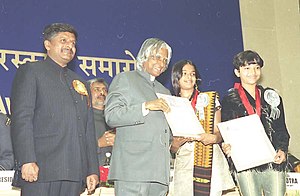 The President Dr. A.P.J. Abdul Kalam presenting the Best Child Artist Award for the year 2002 to Shweta Prasad for her role in "Makdee" (along with, P. S. Keerthana for Kannathil Muthamittal ) at the 50th National Film Awards

Shweta began her career at a very tender age. She started in television but soon moved to Bollywood. Her film debut in 2002 was with a double role in Makdee for which she got the National Award for Best Child Actress. After her success on the silver screen, she got offers from television series such as Kahaani Ghar Ghar Kii and Karishma Kaa Karishma. In 2005, her talent was again recognized by director Nagesh Kukunoor and he offered her the film Iqbal, and she became a household name with the role of “Khadija” in the film. She won the Best Supporting Actress Award at the 5th Karachi International Film Festival for Iqbal.

Shweta took a break after Iqbal and continued her studies.[6] She is a graduate in Journalism and Mass Media, and after her studies, she made a documentary on Indian Classical Music featuring the legends of the music industry. Shweta spent four years between 2012 and 2016 researching and making this documentary film, which features music giants like Shubha Mudgal, A R Rahman, Pandit Shiv Kumar Sharma, Pandit Hari Prasad Chaurasia, Vishal Bhardwaj, Amit Trivedi and Ustad Amjad Ali Khan among many other legends. The film also has a ten-minute animation bit showing a 5000-year history of Indian music. Shweta, who is herself trained in playing the Sitar, is a classical music enthusiast and made this project from her own pocket out of passion, and this documentary film, Roots, is now available on Netflix.[7]

Shweta made her debut in Telugu cinema in 2008, with the film Kotha Bangaru Lokam. She has made eight movies in Tamil, Telugu, and Bengali.

Apart from films and television, Shweta has explored behind-the-camera work and worked as a script consultant at Phantom Films.

Shweta has made her grand comeback with the Balaji Telefilms television series Chandra Nandni as leading actress Nandni, and her next Hindi film outing was Badrinath Ki Dulhania by Dharma Productions.[8]

Shweta played a rookie journalist and central protagonist in The Tashkent Files, a suspense drama thriller based on the death of India's Second Prime Minister Lal Bahadur Shastri. She received critical praise and acclaim from critics and audiences alike.[9] The film was received well commercially and has been hailed as a surprise box office success of 2019,[10] after successfully making a 50-day Box Office run.