Kolhapur State or Kolhapur Kingdom (1710–1949) was a Maratha princely State of India, under the Deccan Division of the Bombay Presidency, and later the Deccan States Agency.[1] It was considered the most important of the Maratha principalities with the others being Baroda State, Gwalior State and Indore State. Its rulers, of the Bhonsle dynasty, were entitled to a 19-gun salute – thus Kolhapur was also known as a 19-gun state. The state flag was a swallow-tailed saffron pennant.[2] 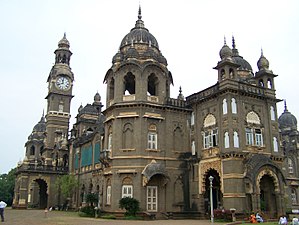 The Maharajas of Kolhapur have a common ancestry with the Bhonsle dynasty of Satara, being direct descendants of the Maratha King Shivaji. The states of Satara and Kolhapur came into being in 1707, because of the succession dispute over the Maratha kingship. Shahuji, the heir apparent to the Maratha kingdom, captured by the Mughals at the age of nine, remained their prisoner at the death of his father Sambhaji, the elder son of Shivaji the founder of the Maratha Empire, in 1689. The Dowager Maharani Tarabai (wife of Rajaram I) proclaimed her son Shivaji II, as Chhatrapati under her regency. The Mughals released Shahu under certain conditions in 1707, and he returned to claim his inheritance. He defeated the regent at the Battle of Khed and established himself at Satara, forcing her to retire with her son to Kolhapur. By 1710 two separate principalities had become an established fact. Shivaji II and Tarabai were soon deposed by the other wife of Rajaram, Rajasbai. She installed her own son, Sambhaji II as the new ruler of Kolhapur. Sambhaji II signed the Treaty of Warana in 1731 with his cousin Shahuji to formalize the two separate seats of Bhonsle family. The British sent expeditions against Kolhapur in 1765 and 1792;[3] Kolhapur entered into treaty relations with the British, after the collapse of the Maratha confederacy in 1812. In the early years of the 19th century the British invaded again, and appointed a political officer to temporarily manage the state.[3][5]

A regent called Daji Krishna Pandit was installed by the British to govern the state in 1843 at a time when the natural heir to the throne was underage. He took direction from a political agent of the East India Company and among their actions were reforms to the tax of land. These reforms caused much resentment and, despite Kolhapur having refrained from involvement in the previous Anglo-Maratha Wars, a revolt against the British began in 1844. The rebellion began with soldiers locking themselves into hill-forts such as those as Panhala and Vishalgad, and then spread to Kolhapur itself. Both the regent and the political agent were captured by the militia forces led by Babaji Ahirekar.[6]

The last ruler of Kolhapur was Maharaja Shahaji II. After Indian independence in 1947, Kolhapur acceded to the Dominion of India on 14 August 1947 and merged into Bombay State on 1 March 1949. In 1960 Bombay state was divided by languages into the states of Maharashtra and Gujarat.[citation needed] The boundaries of former Kolhapur state correspond very closely with those of modern-day Kolhapur district in Maharashtra state.

Royal family of the erstwhile Kolhapur state in 2011

There were Eleven Feudatory Jagirdars of Kolhapur. They all paid Nazar on succession equal to a year's net income of their Jagirs and also an annual contribution towards the maintenance of military force. They are:[7]