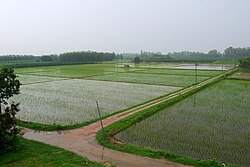 The state of Punjab led India's Green Revolution and earned the distinction of being the "breadbasket of India."[1][2]

The Green Revolution was a period that began in the 1960s during which agriculture in India was converted into a modern industrial system by the adoption of technology, such as the use of high yielding variety (HYV) seeds, mechanised farm tools, irrigation facilities, pesticides and fertilizers. Mainly led by agricultural scientist M. S. Swaminathan in India, this period was part of the larger Green Revolution endeavor initiated by Norman E Borlaug, which leveraged agricultural research and technology to increase agricultural productivity in the developing world.[3]

Under premiership of Congress leader Lal Bahadur Shastri,[4][5] the Green Revolution within India commenced in 1968, leading to an increase in food grain production, especially in Punjab, Haryana, and Uttar Pradesh. Major milestones in this undertaking were the development of high-yielding varieties of wheat,[6] and rust resistant strains of wheat.[7][8] However, the long-term effects of green revolution have been analysed by environmental activists like Vandana Shiva who are of the opinion that it caused greater environmental, financial and sociological problems for the country like droughts, rural indebtedness and farmer suicides.[9] Reports have shown soil deterioration from the use of chemicals bringing ruin to farmers, the land, food and water supply. This caused a collapse of agricultural systems in many regions. [10]

Farmers, young and old, educated and uneducated, have easily taken to the new agronomy. It has been heart-warming to see young college graduates, retired officials, ex-army men, illiterate peasants and small farmers queuing up to get the new seeds.

A number of people have been recognized for their efforts during India's Green Revolution.

The main development was higher-yielding varieties of wheat,[6] for developing rust resistant strains of wheat.[7] The introduction of high-yielding varieties (HYV) of seeds and the improved quality of fertilizers and irrigation techniques led to the increase in the production to make the country self-sufficient in food grains, thus improving agriculture in India. Also, other varieties such as Kalyan Sona and Sonalika were introduced by cross breeding of wheat with other crops.[15] The methods adopted included the use of high-yielding varieties (HYVs) of seeds[16] with modern farming methods.

The production of wheat has produced the best results in fueling self-sufficiency of India. Along with high-yielding seeds and irrigation facilities, the enthusiasm of farmers mobilized the idea of agricultural revolution. Due to the rise in use of chemical pesticides and fertilizers, there was a negative effect on the soil and the land (e.g., land degradation).

The other practices include high-yielding varieties (HYVs) of seeds, Irrigation infrastructure, use of pesticides, insecticides and herbicides, consolidation of holdings, land reforms, improved rural infrastructure, supply of agricultural credit, use of chemical or synthetic fertilizers, use of sprinklers or drip irrigation systems and use of advanced machinery.

Rationale for the Green Revolution[edit]

The Green Revolution in India was first introduced in Punjab in the late 1960s as part of a development program issued by international donor agencies and the Government of India.[17]

During the British Raj, India's grain economy hinged on a unilateral relation of exploitation.[18] Consequently, when India gained independence, the weakened country quickly became vulnerable to frequent famines, financial instabilities, and low productivity. These factors formed a rationale for the implementation of the Green Revolution as a development strategy in India.

The Green Revolution yielded great economic prosperity during its early years. In Punjab, where it was first introduced, the Green Revolution led to significant increases in the state's agricultural output, supporting India's overall economy. By 1970, Punjab was producing 70% of the country's total food grains,[21] and farmers' incomes were increasing by over 70%.[21] Punjab's prosperity following the Green Revolution became a model to which other states aspired to reach.[22]

However, despite the initial prosperity experienced in Punjab, the Green Revolution was met with much controversy throughout India.

Criticism on the effects of the green revolution include the cost for many small farmers using HYV seeds, with their associated demands of increased irrigation systems and pesticides. A case study is found in India, where farmers are buying Monsanto BT cotton seeds—sold on the idea that these seeds produced 'non natural insecticides'. In reality, they still had to pay for expensive pesticides and irrigation systems, which led to increased borrowing to finance the change from traditional seed varieties. Many farmers had difficulty in paying for the expensive technologies, especially if they had a bad harvest. These high costs of cultivation pushed rural farmers to take out loans—typically at high interest rates.[17] Over-borrowing entrapped the farmers into a cycle of debt.[17]

India's liberalized economy further exacerbated the farmers' economic conditions. Indian environmentalist Vandana Shiva writes that this is the "second Green Revolution". The first Green Revolution, she suggests, was mostly publicly funded (by the Indian Government). This new Green Revolution, she says, is driven by private (and foreign) interest—notably MNCs like Monsanto—as encouraged by Neoliberalism. Ultimately, this is leading to foreign ownership over most of India's farmland, undermining farmers' interests.[17]

Farmer's financial issues have become especially apparent in Punjab, where its rural areas have witnessed an alarming rise in suicide rates.[17] Excluding the countless unreported cases, there has been estimated to be a 51.97% increase in the number of suicides in Punjab in 1992–93, compared to the recorded 5.11% increase in the country as a whole.[17] According to a 2019 Indian news report, indebtedness continues to be a grave issue affecting the people of Punjab today, demonstrated by the more than 900 recorded farmer committed suicide in Punjab in the last two years.[23]

Excessive and inappropriate use of fertilizers and pesticides polluted waterways and killed beneficial insects and wildlife. It has caused over-use of soil and rapidly depleted its nutrients. The rampant irrigation practices led to eventual soil degradation. Groundwater practices have fallen dramatically. Further, heavy dependence on few major crops has led to loss of biodiversity of farmers, and the increase of stubble burning cases since 1980. These problems were aggravated due to absence of training to use modern technology and vast illiteracy leading to excessive use of chemicals.[24]

The green revolution spread only in irrigated and high-potential rainfed areas. The villages or regions without the access of sufficient water were left out that widened the regional disparities between adopters and non-adopters. Since, the HYV seeds technically can be applied only in a land with assured water supply and availability of other inputs like chemicals, fertilizers etc. The application of the new technology in the dry-land areas is simply ruled out.

The states like Punjab, Haryana, Uttar Pradesh, etc. having good irrigation and other infrastructure facilities were able to derive the benefits of the green revolution and achieve faster economic development while other states have recorded slow growth in agriculture production.[25]

In the years since Green Revolution was adopted, issues of sustainability have come up due to the adverse environmental and social impacts. To meet this challenge other alternatives of farming have emerged like small subsistence farms, family homesteads, New Age communes, village and community farming collectives and women’s cooperatives with the common purpose of producing organically grown, chemical free food. In green revolution areas of the country increasing numbers of families are experimenting on their own with alternative systems of land management and the growing of crops. Building upon the idea of sustainable development, commercial models for large scale food production have been developed by integrating traditional farming systems with appropropriate energy efficient technology.[26]