Gandhi at the Asian Relations Conference in 1947 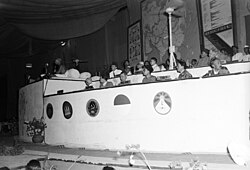 Two Tibetan delegates (front right) during the Asian Relations Conference in Delhi in 1947 as Mahatma Gandhi speaks (far left). A Tibetan flag is seen in front of them along with flags of other participating countries. Many of them had not yet achieved independence. The conference included representatives from, among others, Malaya, Burma, Ceylon, Soviet Asian Republics, Korea.[1]

The Asian Relations Conference took place in New Delhi in March–April 1947. It was hosted by Prime Minister Jawaharlal Nehru, who then headed a provisional government that was preparing for India's Independence, which came on 15 August 1947. The Asian Relations Conference brought together many leaders of the independence movements in Asia, and represented a first attempt to assert Asian unity. The objectives of the conference were "to bring together the leading men and women of Asia on a common platform to study the problems of common concern to the people of the continent, to focus attention on social, economic and cultural problems of the different countries of Asia, and to foster mutual contact and understanding."

In his writings and speeches, Nehru had laid great emphasis on the manner in which post-colonial India would rebuild its Asia connections. At this conference Nehru declared: "... Asia is again finding herself ... one of the notable consequences of the European domination of Asia has been the isolation of the countries of Asia from one another. ... Today this isolation is breaking down because of many reasons, political and otherwise ... This Conference is significant as an expression of that deeper urge of the mind and spirit of Asia which has persisted ... In this Conference and in this work there are no leaders and no followers. All countries of Asia have to meet together in a common task ..."[2][3]