Michael Bolotin[4] (born February 26, 1953), known professionally as Michael Bolton, is an American singer and songwriter. Bolton originally performed in the hard rock and heavy metal genres from the mid-1970s to the mid-1980s, both on his early solo albums and those he recorded as the frontman of the band Blackjack. He became better known for his series of pop rock ballads, recorded after a stylistic change in the late 1980s.

Bolton began recording in 1975 at The Church Studio in Tulsa, Oklahoma. This first album was self-titled using his original family name of Bolotin. Early in his musical career he focused on hard rock, with his band Blackjack once opening for heavy metal artist Ozzy Osbourne on tour. It was rumored that in 1983 Bolton auditioned for, but was denied, the lead vocalist position with Osbourne's former band, Black Sabbath.[7] Bolton later stated this was untrue, saying "That rumor about me auditioning for Black Sabbath was only a rumor, I don't know how on earth it started."[8][9]

After anglicizing his family name to Bolton, he gained his first major hit as a songwriter, co-writing "How Am I Supposed to Live Without You" for Laura Branigan, previously best known for singing the pop hit "Gloria". Narrowly missing the Top 10 on the US pop chart, Branigan took the song to number one on the Adult Contemporary chart for three weeks in 1983. The two sought to work with each other again, and their next collaboration was when Bolton co-wrote "I Found Someone" for Branigan in 1985. Her version was only a minor hit, but two years later, Cher resurrected the song, and with it her own singing career. Bolton co-wrote several other songs for both singers. Bolton recorded his own rendition of "How Am I Supposed to Live Without You" in 1988, which reached number one on the Hot 100. 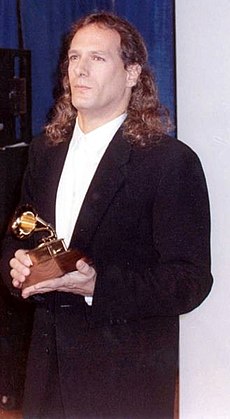 Bolton at the 1990 Grammy Awards

Bolton achieved his greatest success in the late 1980s and early 1990s as a singer on the adult contemporary/easy listening charts. One of his first major hits was his 1987 interpretation of the Otis Redding classic "(Sittin' On) the Dock of the Bay". Redding's widow, Zelma Redding, said she was so moved by Bolton's performance "that it brought tears to my eyes. It reminded me so much of my husband that I know if he heard it, he would feel the same."[10] Always interested in soul and Motown classics, Bolton's success with that song encouraged him to tackle the standard "Georgia on My Mind", with which he had another hit. In 1991, Bolton released the album Time, Love & Tenderness which featured his Grammy Award-winning cover version of "When a Man Loves a Woman".[11]

As a singer, he has performed with other artists such as: Lucia Aliberti, Patti LaBelle, José Carreras, Tony Cetinski, Ray Charles, Celine Dion, Plácido Domingo, Renée Fleming, Wynonna Judd, BB King, The Lonely Island, Luciano Pavarotti, Percy Sledge, and Zucchero. As a songwriter, he has written and collaborated on several songs for other artists as well.

Bolton's last Top 40 single in the US in his own right was the 1997 hit "Go the Distance" (featured in the Disney animated motion picture Hercules), which peaked at No. 1 on the US adult contemporary chart. He hired conductor Larry Baird (orchestral musical director/conductor/arranger for The Moody Blues, Three Dog Night, Al Jarreau, etc.) for his 2001 tour.

In 2006, Bolton and Nicollette Sheridan (his fiancée at the time) sang a duet, "The Second Time Around", for the album Bolton Swings Sinatra. In March 2007, Bolton toured South Africa for the first time. He was the headline act at Jacaranda 94.2 FM's two-day concert.

For Over the Rainbow, an album which was recorded in five days, Bolton recorded the song "New York City", which was also on his Bolton Swings Sinatra album. This was for an episode of the TV series, Challenge Anneka. The proceeds from the album went to children's hospices across the UK.

Bolton's album Only a Woman Like You was released in 2001. The title song was co-written by Shania Twain. Bolton released his album One World One Love in the UK on September 21, 2009. The first single, "Just One Love", was released one week earlier.[12] 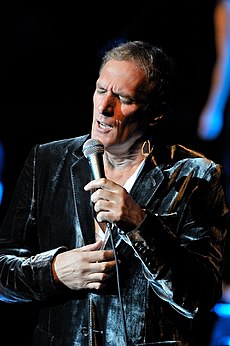 In 2011, Bolton was featured as a guest vocalist in The Lonely Island's song "Jack Sparrow" on their Turtleneck & Chain album. His performance with the comedic hip-hop trio focused on his (intentionally) off-topic chorus and miscommunication with the group, and the video featured him dressed in costumes as Jack Sparrow from Pirates of the Caribbean, Forrest Gump, Erin Brockovich, and Tony Montana from Scarface.[13]

As of February 2015, Bolton was working on the recording of a new studio album. He has collaborated with Indian musician A. R. Rahman for a song which was recorded in February 2011 for Gems – The Duets Collection.[14]

In 2013 Bolton released the album Ain't No Mountain High Enough: A Tribute to Hitsville U.S.A., which featured duets with Kelly Rowland, Melanie Fiona and Orianthi.[15]

Bolton has made a number of cameo appearances in feature films and television, usually appearing as himself, such as in Meet Wally Sparks, Two and a Half Men, and The Nanny.[17] Although he has been rumored to have appeared as an extra in Dune as a "spice-eyed" drummer, Bolton has stated in interviews that it is not him.[18]

In August 2006, Bolton was one of Lucy Lawless's duet partners on the Fox network's program Celebrity Duets, which Simon Cowell's Syco Productions Company produced for the network.

Bolton was a contestant on the eleventh season of Dancing with the Stars.[19] He and his dance partner Chelsie Hightower were the second couple to be eliminated, on September 28, 2010.

In 2015, Bolton starred in a Pizza Hut commercial as himself singing Jingle Bells while the family opens up their pizza order.[20]

On May 10, 2018, it was announced that American Dream: Detroit (Exclusive), Michael Bolton film, would premiere on Tuesday, May 15, 2018 in Redford Theater.[21] Despite Bolton being born in Connecticut, he fell in love with the city of Detroit and wanted to highlight its recent economic comeback. This documentary features interviews with several business moguls, singers and other Detroit natives, including Christopher Ilitch, Jerry Bruckheimer, Francis Ford Coppola, Aretha Franklin, Smokey Robinson, and Alice Cooper. This "Love-Letter to Detroit" film is reported by the Crain's (a local business publication) in an article titled "Michael Bolton to appear at Redford Theatre for Detroit documentary premiere", written by Annalise Frank.[22]

On February 24, 1992, the American R&B group the Isley Brothers filed a lawsuit against Bolton, claiming his 1991 hit song "Love Is a Wonderful Thing" plagiarized their 1966 song of the same name.[23]

A Los Angeles jury ruled in favor of the Isley Brothers on April 25, 1994.[24] The jury determined there were five instances in which Bolton's song plagiarized the Isleys' tune. Bolton, co-writer Andrew Goldmark and Sony Publishing were ordered to turn over more than $5 million in profits from the sales of Bolton's version of the song to the Isley Brothers. It was the largest award in history for plagiarism in the music industry.[25]

Bolton, Goldmark and Sony appealed the verdict, and the court fight continued for nearly seven more years. The case concluded on January 22, 2001, when the Supreme Court of the United States refused to hear the appeal of a May 2000 decision by the Ninth Circuit Court Of Appeals in San Francisco.[26]

Under the Ninth Circuit ruling, the Isleys were to be paid $4.2 million from Sony Music, $932,924 from Bolton, $220,785 from Goldmark, and the balance from Bolton and Goldmark's music publishing company.[27]

A previous similar lawsuit, regarding his hit composition "How Am I Supposed to Live Without You" was settled in Bolton's favor, helped in part by testimony from the singer Laura Branigan.

Bolton was introduced to actress Nicollette Sheridan in 1992 by adult contemporary/jazz saxophonist Kenny G.[29] Bolton and Sheridan dated until 1995, stopped dating, then reunited in 2005 and became engaged in March 2006;[29] however, it was confirmed in August 2008 that they had broken off their engagement.[33]

In 1993, Bolton established The Michael Bolton Foundation, later renamed The Michael Bolton Charities, to assist women and children at risk from the effects of poverty as well as emotional, physical, and sexual abuse.[36] In the late 1990s the group was heavily criticized for the incredibly low percentage of contributions that went towards charity work. In 1995 only 15% of the 2.6m USD the foundation raised went to charity with most of the funds paying for a concert headlined by Bolton himself.[37] Bolton and the foundation have had a long running relationship with former Connecticut Governor John G. Rowland with Rowland steering state funding to the organization. In 1995 Bolton performed at a fundraiser for Rowland soon after the foundation received a grant of $300,000 from the state.[38] In 2014 Michael Bolton wrote a letter to the Judge overseeing Rowland's sentencing in a campaign coverup trial in the name of the Foundation, stating "We, at The Michael Bolton Charities, believe John Rowland has much to contribute to our community and that given the opportunity, John will continue his work on behalf of women and children at risk."[39] The foundation accepts grant proposals by invitation only.[40]

Bolton also serves as the honorary chairman of Prevent Child Abuse America,[41] the national chairman for This Close for Cancer Research,[42] and a board member for the National Mentoring Partnership[43] and the Joe DiMaggio Children's Hospital.[44]

In March 2003, Bolton joined with Lifetime Television, Verizon Wireless, and many others to lobby on behalf of the National Coalition Against Domestic Violence,[46] urging legislation to provide more assistance for victims of domestic violence, such as affordable housing options.

Bolton has received the Lewis Hine Award from the National Child Labor Committee, the Martin Luther King Award from the Congress of Racial Equality, and the Ellis Island Medal of Honor from the National Ethnic Coalition of Organizations.[47] The Hollywood Chamber of Commerce[48] also recognized Bolton with a star on the Hollywood Walk of Fame for his musical and charitable contributions.

Since 1975, Bolton has released at least 17 studio albums and 35 singles. Nine of his singles have peaked at No. 1 on either the Billboard Hot 100 or the Hot Adult Contemporary Tracks charts in the US. He has also released numerous compilation albums and three Christmas albums.